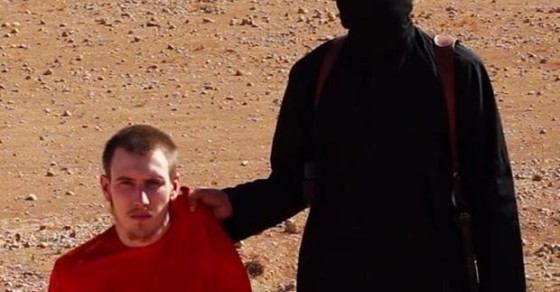 In its latest beheading video, ISIS announced that it has killed American aid worker Peter Kassig and more than a dozen soldiers allegedly loyal to Syrian President Bashar al-Assad.

The 16-minute video, released Sunday, differs from ISIS’ previous propaganda films in that it doesn’t show Kassig’s apparent murder in graphic detail. Instead, a black-clad ISIS executioner known as Jihadi John, announces on camera that he’s going to kill Kassig, and then shows what appears to be his severed head.

One senior American official said Sunday that the government was increasingly convinced the video was authentic and that Kassig had been killed, The New York Times reported. Kassig was an Army Ranger turned aid worker who converted to Islam during his time in captivity and took the name Abdul Rahman. Before he became an ISIS prisoner, Kassig reportedly treated the injuries of a prominent Nusra Front fighter in Syria, which later prompted the Al Qaeda affiliate to call for his release.

An October vigil at Butler University in Indiana held for Peter Kassig.

Kassig’s family released a statement on Sunday asking that the media exercise caution and restraint in writing about Peter’s death. “We prefer our son is written about and remembered for his important work and the love he shared with friends and family, not in the manner the hostage takers would use to manipulate Americans and further their cause,” the family said.

If the victim shown in the film is, in fact, Kassig, then he would be the fifth Western hostage killed by the makeshift caliphate in recent months. Previous victims include American journalists James Foley and Steven Sotloff, former British Air Force engineer David Haines and British taxi driver Alan Henning. ISIS is still holding British photojournalist John Cantlie captive and forcing him to work as a spokesman of sorts.

In a separate part of the video, ISIS shows its executioners standing over more than a dozen men—allegedly Syrian soldiers loyal to Assad—dressed in matching navy blue uniforms and kneeling on the ground. “Obama, today we kill Bashar’s soldiers, but tomorrow we kill yours,” Jihadi John says, before ISIS shows their beheadings in graphic detail.

The video comes several days after ISIS announced that American-led airstrikes did not kill the leader of the jihadi group, Abu Bakr al-Baghdadi, as has been speculated in some reports. In recent weeks, as Baghdadi’s fate allegedly hung in the balance, a variety of Islamist militant groups across the Middle East pledged allegiance to ISIS.

A screen shot of map showing where ISIS has expanded in recent months.