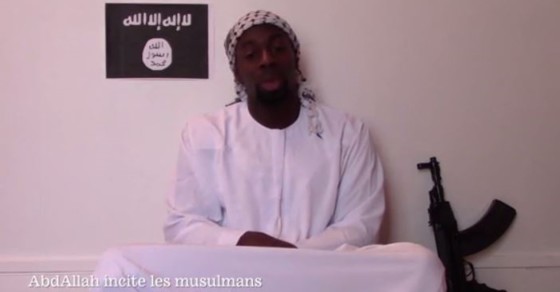 Exclusive: Paris Terrorist Pledged Allegiance To ISIS Prior To Attack
By Gilad Shiloach

Exclusive: Paris Terrorist Pledged Allegiance To ISIS Prior To Attack

A new video released by an official ISIS forum shows Amedy Coulibaly, the 32-year-old terrorist who murdered four men during the Hyper Cacher siege in Paris, declaring his loyalty to the Islamic State.

“I’m a soldier of the Caliphate [ISIS] since the beginning,” Coulibaly says in the video. “Our group was coordinated before the attack. France is a legitimate target because [of] what they are doing to us.”

Coulibaly explains how he helped the Kouachi brothers prepare for the attack: “We did a few things together and a few things separately to maximize the impact. I helped them by giving them a few thousand euros to buy what they needed.”

Coulibaly opens the video by stumbling over a script written in Arabic. He identifies himself using his jihadi nom de guerre, Abou Bassir Abdallah al-Ifriqi, and says, “You can’t attack us and expect us to sit still. You keep bombarding our civilians and soldiers just because we obey the Sharia law.”

At the end of the video, Coulibaly asks of other Muslims: “What do you do, my brothers, when the prophet keeps being insulted? I have been to a lot of mosques in France, particularly around Paris. They are full of young, fit men.  How come so few stand up to defend our people?”

The attack was originally attributed to Al Qaeda in the Arabian Peninsula. The two Charlie Hebdo attackers reported to a journalist that they had been sent by AQAP and its now deceased leading figure, Anwar al-Awlaki.

However, Coulibaly had already stated his affiliation with ISIS. The video was recorded before the attack and shows Coulibaly pledging loyalty to ISIS and its leader, Abu Bakr al-Baghdadi.

In the video, Coulibaly wears a white jellabiya (a traditional Muslim garment) and sits with an AK-47 beside him–the same type of rifle used in the assault. The video also shows him training physically, doing pull-ups.

Coulibaly alternates clothing throughout the video, from fatigues to a jellabiya.

Members of the French police special forces evacuate the hostages after the attack on a kosher grocery store in Porte de Vincennes, eastern Paris, on Jan. 9.