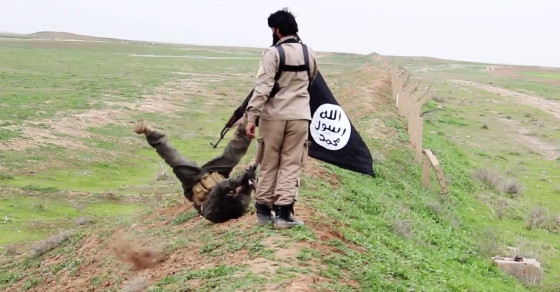 Today the Ninewa division of the Islamic State based in northern Iraq published the fourth part of its propaganda series on training. “Blood of Jihad” closely resembles the first release in the series—alternately terrifying and hilarious. One moment, ISIS fighters chillingly stalk through fields, firing their weapons. The next, they’re head-butting tiles and performing full leg splits.

There are propaganda speeches, of course, but the filmmakers take care to showcase the heavy weaponry and tactical skills of the fighters. Notably, these ISIS members wear surplus military fatigues, a departure from the black shirts and ski masks that have become the terror group’s hallmark. The video also presents the soldiers as a large force, rarely showing fighters standing by themselves.

More Video: Inside An ISIS Training Camp For Boys

Watch out for one particularly adept fighter practicing his camouflage skills with his weapon drawn and branches glued to his body. Can you see him?