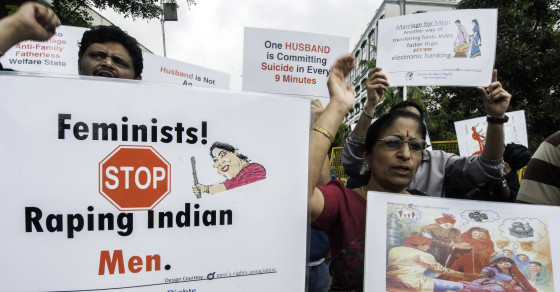 India’s Pro-Male Activists Feel the Law Is Against Them 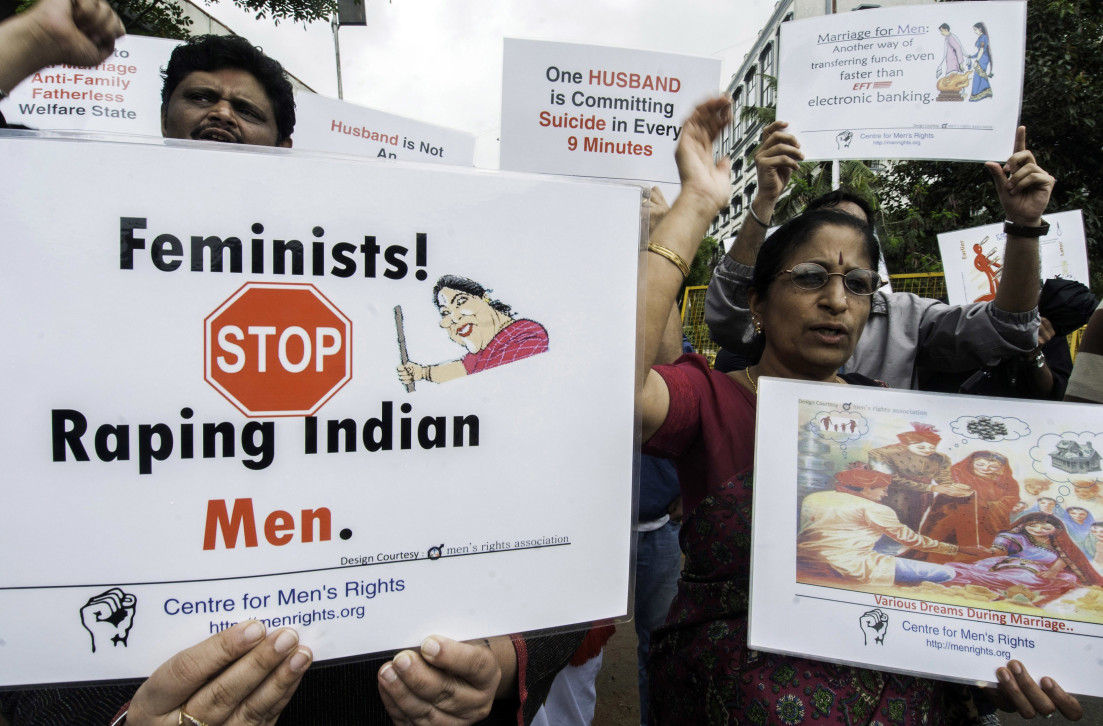 “Women who are raped should be hanged with their rapists.” Those are the words of Abu Asim Azmi, a veteran politician in Indian parliament, and one of two high-ranking members of the country’s Samajwadi Party who incited outrage this month with their comments about rape victims.

Former Defense Minister Mulayam Singh Yadav also fueled the fire by stating that the death penalty for rape is unfair, and that boys make mistakes. “When boys and girls have differences, the girl gives a statement that ‘the boy raped me,'” he said, “and that poor boy gets a death sentence.” Yadav also promised that, if elected, his Samajwadi Party would attempt to repeal laws that sentence rapists to death, and punish those who lie in a rape case.

Recent high-profile gang rapes in India have captured international attention and catapulted violence against women to the top of the agenda in the current elections. In December 2013, a poll revealed that more than 93% of voters in Delhi see combating violence against women as a priority, second only to corruption. And with good cause. Statistics from India’s National Crime Record Bureau suggest that these crimes have increased nationwide by 7.1% since 2010. In 2012, there were 24,923 rapes reported, a figure considered to be a severe underrepresentation of actual occurrences that’s likely to rise, as a public profile for the issue means women feel more empowered to fight back.

Right now, however, the men are leading a backlash.

Since the comments made by SP politicians, use of the hashtag #backingrapists to express fury over the party’s statements spiked. But a handful of men’s rights activists began fighting fire with fire, using hashtags (#malevote14, #stopmisuseofIndianlaws, #498A, #powerof51, #mensrights) on Twitter and Facebook to promote their pro-male agenda in the general elections.

The male rights activists are, by and large, campaigning against what they call the “misuse” of Indian laws, primarily: the Protection of Women from Domestic Violence Act, the cruelty statute (section 498a of which provides women who are being harassed for a marriage dowry a means of redress), and alimony and custody provisions of the Hindu Marriage Act. Activists claim these laws are constructed to assume guilt on the part of the man until proven innocent. They say false accusers are abusing the laws to extort and blackmail their male victims and their families.

According to male rights activist groups, their supporters number around 20,000 and most of them back the SP, which is largely supported by the lower Hindu castes. The SP also got a boost from the Save Indian Family Foundation, a prominent men’s rights organization. The SIFF published a press release prior to the elections welcoming the SP’s political platform for its emphasis on widespread misuse of rape and dowry laws and what it describes as gender-biased laws. The group called on all its members and associates to support the SP, and its spokesman Swarup Sakar (pictured above) has been extremely vocal in pushing his organisation’s agenda.

Male rights activists have constructed their movement’s key messages to directly counter India’s women’s rights narrative, and despite their size, they are getting a disproportionate amount of attention. When the Indian National Crime Bureau released its statistics for 2012 last fall revealing that 8,233 young women, many of them new brides, were killed in “dowry deaths,” the media translated that number into a “Woman Is Killed Over Dowry Every Hour in India.” Men’s rights activists countered the statistic, claiming that every eight minutes in India a man commits suicide because of misuse of the anti-dowry law.

"Every eight minutes a married man commits suicide in India due to alleged misuse of Section 498A of IPC against... https://t.co/K91al30fgw

Following the brutal gang rape of a young woman on a bus in New Delhi in December, an event that triggered mass streets protests and raised questions as to the efficacy of existing laws to prevent sex crimes in India, the international media began asking, “Are women safe in India?” The National Coalition of Men, a West Bengal-based organization, launched a blog asking, “Are Men Safe in India?” and blamed the “current regime of women empowerment” for creating an anti-male environment, prompting politicians to appease women voters.

B4 u vote, as a Citizen u hav rite 2 ask ur leaders, how can they ensure ur family is safe from poorly drafted laws #PowerOf51

According to a survey conducted in 2011, nearly one in four Indian men have committed sexual violence at some point in their lives, and one in five have admittedly forced their wife or partner to have sex. While male rights activists number only 20,000, they are extremely active in the debate over legal provisions constructed to combat such violence. The question of whose voice is heard more loudly will likely be answered at the polls.