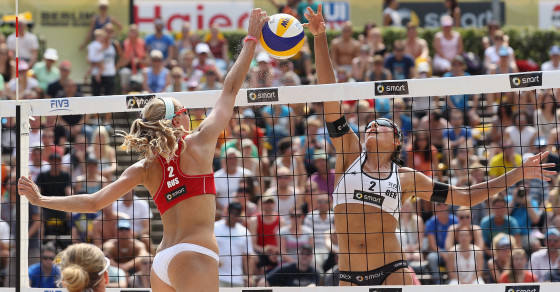 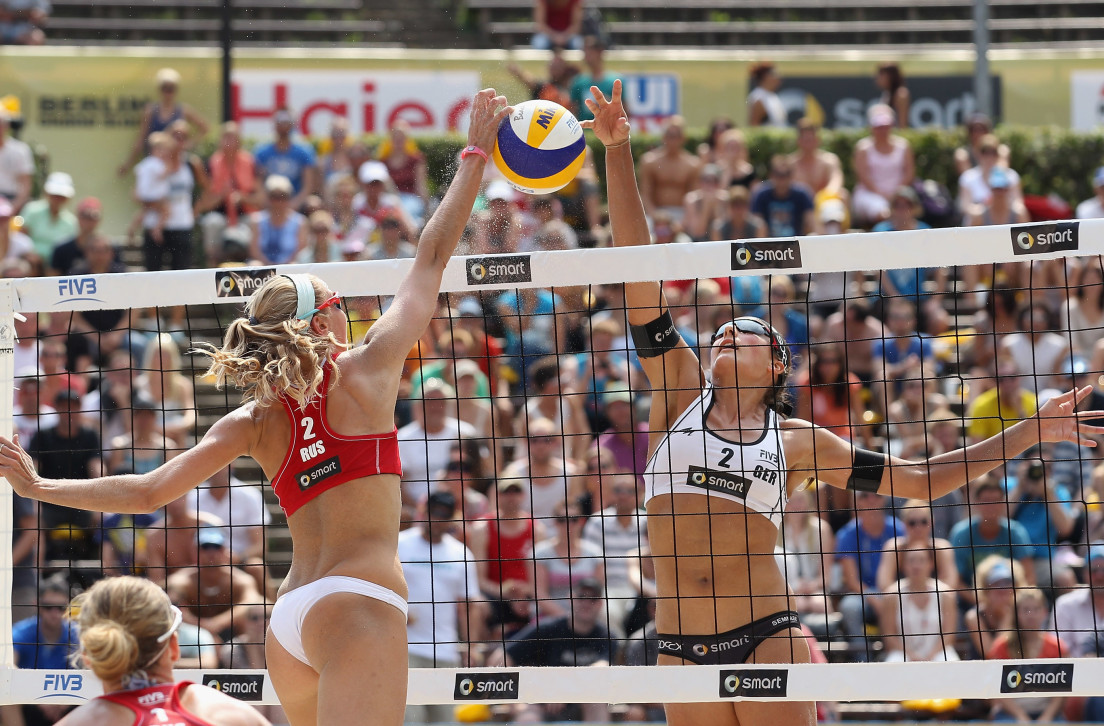 There are no real ocean beaches in Berlin. There is no surfing, there are no palm trees and in the winter there is hardly any sun. But despite the bleak winter, the city is bananas about beach volleyball. Even in the darkest months of the year when it’s just below freezing, with gray clouds smothering the light and snow on the ground, all Berliners want is to get barefoot, string up a net and pretend they’re somewhere warm.

Just steps from the longest remaining stretch of the Berlin Wall is a warm, sandy beach. There’s a bar, and on a recent Sunday afternoon, someone is sipping a Corona. A guy walks past wearing board shorts, and across the sand are eight sand volleyball courts.

Every single one is full.

That’s just one of many beach volleyball complexes here. In landlocked Berlin, beach volleyball is bizarrely popular, to the degree that there are now half a dozen major indoor volleyball facilities. The most recent opening was South Beach Berlin in October. It’s a 26,372-square-foot behemoth with more than 7 miles of toe-warming piping built under the sand to give it that authentic, sun-baked underfoot feel.

In summer, it’s even more ridiculous. Hundreds of sand volleyball courts dot the city. And in downtown Berlin, Beach Mitte is Europe’s largest urban sand volleyball complex, with 49 courts. So was it the Olympic gold medal in the most recent Summer Olympics that sparked the craze? Is it rooted in volleyball’s popularity in East Germany and the difficulty of travel in the former Soviet-bloc country?

“It’s sand and sun,” says Luise Rossek, 20, who coaches at a winter beach and is a member of the German junior national team. “But the community is more important than just playing. It’s a lifestyle more than a sport.”

Other players hanging out at Beach 61 have different ideas. A few say the popularity in the winter is about taking a break from the darkness and cold. One player mused that it harked back to Soviet bloc travel restrictions placed on East Germans—the theory being that, faced with only state-sanctioned travel options, they decided to make their own beaches. But beach volleyball’s beginnings in Berlin don’t actually stretch that far back, and a number of East Berlin gyms have been converted to beach volleyball courts in the last few years. The roots of the recent craze started in the year before Germany fielded two-person teams for the 1996 Summer Olympics in Atlanta, that’s when the Fédération Internationale de Volleyball (FIVB) made Berlin a stop on the world tour.

Players enjoy the Indoor BeachCenter Berlin, a complex in the north of the city with heated floors, seven courts, a bar and a sauna.
(Vocativ/Joel Stonington)

Creating a beach volleyball court in central Europe isn’t cheap. The most expensive part is the sand. And FIVB trucked in the sand for the tournament. Afterward, a few enterprising students stepped in to take the sand, and the resulting courts were more popular than they could have imagined. The interest only increased when a German pair won the men’s bronze medal in the 2000 Olympics and Berlin hosted the 2005 Beach Volleyball World Championship with an 8,000-person stadium built for the event in the heart of the city.

Although Germany has seen some success in the sport—the men’s pairing won gold in London 2012—the most important thing for the majority of German volleyballers is simply to feel the sand between their toes. “For most people, if you ask them who the Olympic gold medalists were, they don’t care,” says Nikolaus Novak, a coach who works at the Indoor BeachCenter Berlin. “They just like to have fun.”

On recent days, in the packed indoor courts in Berlin, the people say they’re just happy to get out of the cold and play a fun, addictive sport. It’s that simple process of walking in from snow and negative temperatures, taking off your shoes, playing in the sand, grabbing a beer afterward and sweating it out in the sauna. That’s a solid way to get over the winter blues. “You just get rid of the normal day,” says Novak, “and say hello to happiness.”