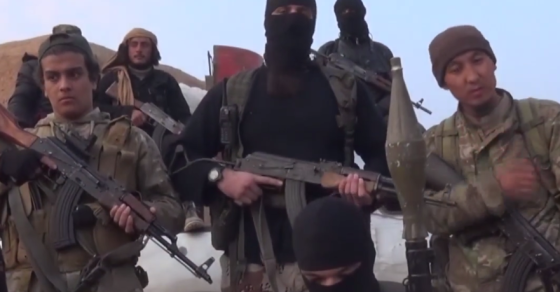 Over the last few days, a series of apparently religiously inspired attacks in France have put authorities and citizens on edge. After calling in troops to increase security, both the government and law-enforcement officials have denied that these various events — which have already claimed one life — are connected in any direct way. But they have conceded that Islamic extremism was an underlying motivation in each.

Vocativ has found an ISIS video that may have played a role in triggering the violent spree of the past week.

The attacks started this past Saturday, when a man cried out “Allahu Akbar” (God is great, in Arabic) while assaulted police officers outside their station with a knife in Tours, France. The cops shot him dead on the scene. The media later found that the assailant, Bertrand Nzohabonayo, had used an ISIS propaganda image as his Facebook profile picture.

The very next day, a driver, also shouting “Allahu Akbar,” slammed into a crowd of 13 pedestrians in Dijon, injuring 11. Police say the former psychiatric patient, who was most likely drunk, will probably face terrorism charges.

This Monday, a second driver, with a similar history of mental illness, drove his car into 10 people in holiday market in Nantes, killing one. Both police and eyewitnesses say the suspect appeared “unbalanced” after the attack while repeatedly stabbed himself and muttered things about protecting children in Chechnya and working to free the people of Palestine.

Finally, that same evening, a bullet smashed through a window at Paris synagogue. No one was injured.

What no one has reported, however, is that only hours before the first attack in this timeline, ISIS released a new video calling for all Muslims in France unable to immigrate and join its campaigns in Syria and Iraq to pick up arms and attack local citizens, “where they stand and in their homes.”

The video, which is in French, calls for Muslims to use anything at their disposal to kill Christian and Jewish citizens: stones, pistols or anything else. This echoes previous videos and calls from ISIS leadership to strike the unbelievers where they stand.

The masked speaker in the video goes on to demand individual pledges of allegiance. One interpretation of this language suggests that the speaker was allowing extremist Muslims listening to the video to commit acts of terror without having to join a specific group or connect with official ISIS members. In short, viewers would have the freedom to launch and execute such acts on their own accord in ISIS’ name.

The speaker also asks that extremist Muslims of France follow the example of Mohammed Merah, the Frenchman of Algerian decent who murdered Jewish citizens and French soldiers in a series of shootings in Toulouse and Montauban. Police ultimately killed Merah, who had claimed eight lives in various locations, after an extended siege of his apartment.

The video appeared in both an ISIS Arabic forum and a French forum. There, a user recently posted the following message:

First Answer: A man assaulted the police with a knife, shouting “Allahu Akbar in Indre-et-Loire police station, before being killed.

Second Answer: An Islamist ran over 10 people in Dijon screaming “In of the children of Palestine”

If the four perpetrators of the incidents in Dijon, Nantes, Paris and Tours were inspired by or a part of an ISIS outreach campaign, the video above may have very well been their final trigger.