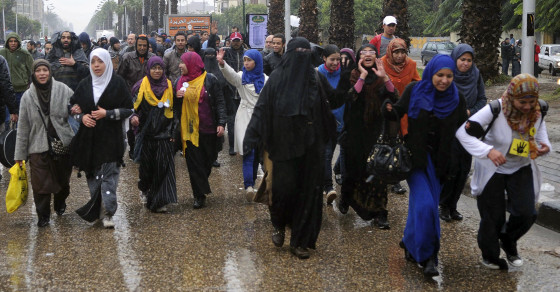 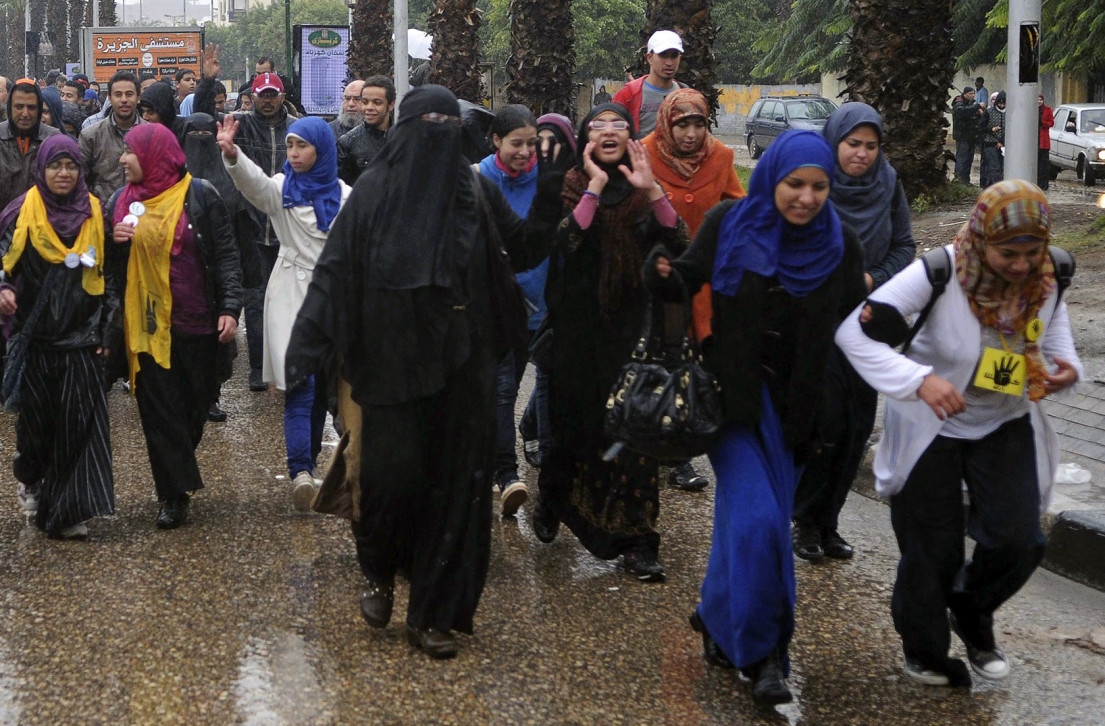 Amna Yasser was only 17 and in her last year of high school when she was arrested near Al Azhar University for protesting against the military coup in Egypt. Mareya el-Metwally Samaha was even younger—only 14 years old when she was arrested for using the Rabaa sign (the anti-coup symbol of four fingers raised) during a human chain. In January, she was sentenced to a year in prison. They’re just two of a large group of female detainees at the center of a growing online movement.

Thousands of Egyptian women, mostly Muslim Brotherhood members, are expressing their exasperation with the government and comparing it to the police state under Hosni Mubarak. They are starting online campaigns, sharing photos of their imprisoned friends and taking to the streets to protest police brutality and the military coup that ousted Muslim Brotherhood member Mohamed Morsi from power in July.

According to a report issued by Women Against the Coup, one of the new grassroots movements in Egypt, at least 200 female pro-Morsi supporters have been detained in the past two months. Their detentions, and the online conversation about them, have largely been overshadowed by the likes of the three Al Jazeera journalists who remain in detention. But because of their association to the Muslim Brotherhood, they could be in much greater danger. In December, the interim cabinet declared the Muslim Brotherhood a terrorist group, so being associated with the group means that they’re likely to be sentenced, and treated, more harshly.

As we were monitoring digital chatter for new insights on the detained Al Jazeera staff members, we came across a photo of the female prisoners and hashtag that was being shared across many social media platforms. We were also able to identify the most active people, and from there we were able to build the story around the photo, which is actually a much broader movement of women against the coup.

The profile images of the Women Against the Coup Facebook pages contains many of the faces of those who have been imprisoned.
(Facebook.com/WomenAntiCoup)

Protests are common among Egyptian university students. Many of them have been led by a group affiliated with Students Against the Coup, a coalition of pro-Morsi men and women. On Nov. 12, 2013, police arrested three female students at Mansoura University during clashes at the campus. In December, police then arrested at least 48 students (35 were women) at Cairo’s Al Azhar University, the oldest Islamic university in the world. The following day, a group of women SAC members led a protest all the way to Rabaa al-Adawiya square, the site of last summer’s pro-Morsi sit-in. The Al Azhar students are now on a hunger strike in prison.

The Women Against the Coup report claims that the detained women were “beaten by batons, their scarfs were removed and they were pulled by the hair; clothes were ripped off and they were sexually molested by officers who touched their private parts.”

This kid, with cuffs in her little hands, coup judiciary will see her lawsuit at 16 Feb #EgyDungeons #Egypt https://t.co/5ns5eaiJR2

Egypt’s Queens: Imprisoned, an online group that started to raise awareness of Egypt’s female prisoners, has been posting the names and stories of all women detained to keep them in the headlines. Amani Hassan was released from jail last month, but only because she was unable to walk due to atrophy in her leg and hand and double vision as a result of torture sustained in prison.

The three women arrested at Mansoura University and the 35 Al Azhar students are the most discussed among the online groups, which have been sharing variations of their photos. This is reminiscent of the viral reaction to Khaled Saeed, who was beaten and murdered by police in 2010. Saeed prompted Wael Ghonim to start a Facebook page urging Egyptians to rise up against the dictatorship, and he was eventually the first to call for Egyptians to take to the streets in 2011. The girls cases’ were supposed to be heard Sunday, but the trial has been adjourned to Feb. 15 to let all witnesses testify.

Freedom for al-Azhar women on a hunger strike.

Abrar Elanani and Menatalla Moustafa are 18-year-old students at Mansoura University, and Yousra Elkhateb is a 21-year-old recent graduate. The three were charged with thuggery, attacking police and destroying public property, and also been charged with cooperating with a terrorist organization. The final charge against the women was for protesting without permission. After President Adly Mansour passed the Demonstration Act in Egypt, protests now require permission from the Ministry of Interior and thus have become somewhat impossible to implement legally by members of the Muslim Brotherhood. The law also allows the Ministry of Interior to use force to disperse protests.

@Official_EgySAC Launches an Electronic Campaign for the #FreeMansouraGirls before their trial tomorrow Tweet 4 them https://t.co/zJGmsTmYoQ 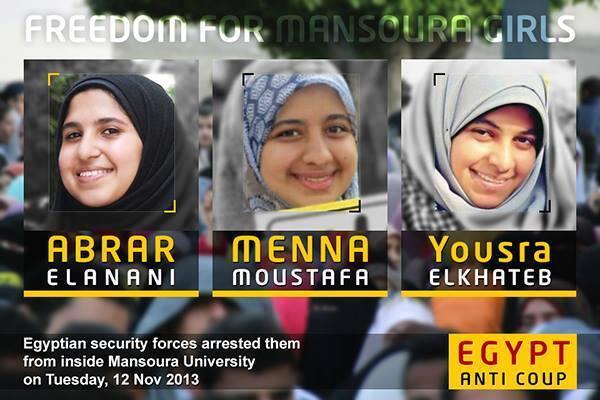 Amnesty International issued a report demanding for the release of the prisoners immediately and said, “The Egyptian authorities must stop treating peaceful protesters like criminals. The relentless crackdown on demonstrations, freedom of expression and independent reporting must end.” According to the Middle East Institute, more than 1,400 people have died in clashes since Morsi was ousted, and thousands more are in prison. This muzzle the government has put on the country is, some suggest, just one step in a downward spiral back to what life in Egypt was like under Mubarak. It remains to be seen if the plight of these female prisoners will have the same effect that Khaled Saeed had on the country.