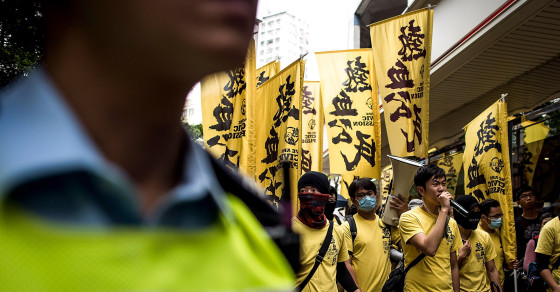 Since 2000, Hong Kong has seen a tenfold increase in the number of people visiting from the Chinese mainland to scoop up Costco-sized boxes of baby food and iPads at lower tax rates and sell them for skyrocketed prices in back home. Last year, 47.3 million shoppers from China visited Hong Kong, up more than 16% since 2013.

On an island of only 7.3 million, this boost in so-called “parallel trading” has been met with hostility and anger. Hong Kong locals say the mainlanders are causing astronomical amounts of traffic, driving up Hong Kong’s prices and disrupting their daily lives. There have been several protests and dozens of arrests in shopping malls near the border between Hong Kong and the mainland in the past month.

On Sunday, the issue escalated in a shopping area in Yuen Long, a neighborhood close to the Chinese border. Fights broke out among the crowd of at least 400 as police restrained and pepper sprayed dozens and arrested 31 according to The Straits Times.