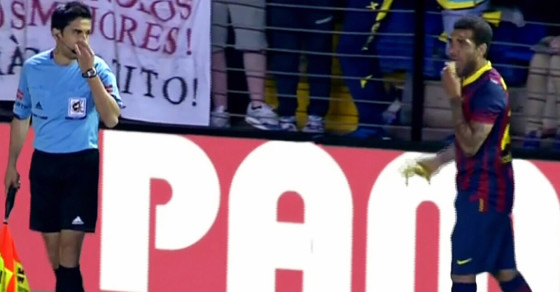 Soccer Star Takes a Bite Out of Bigotry
By Mauricio Savarese

Soccer Star Takes a Bite Out of Bigotry 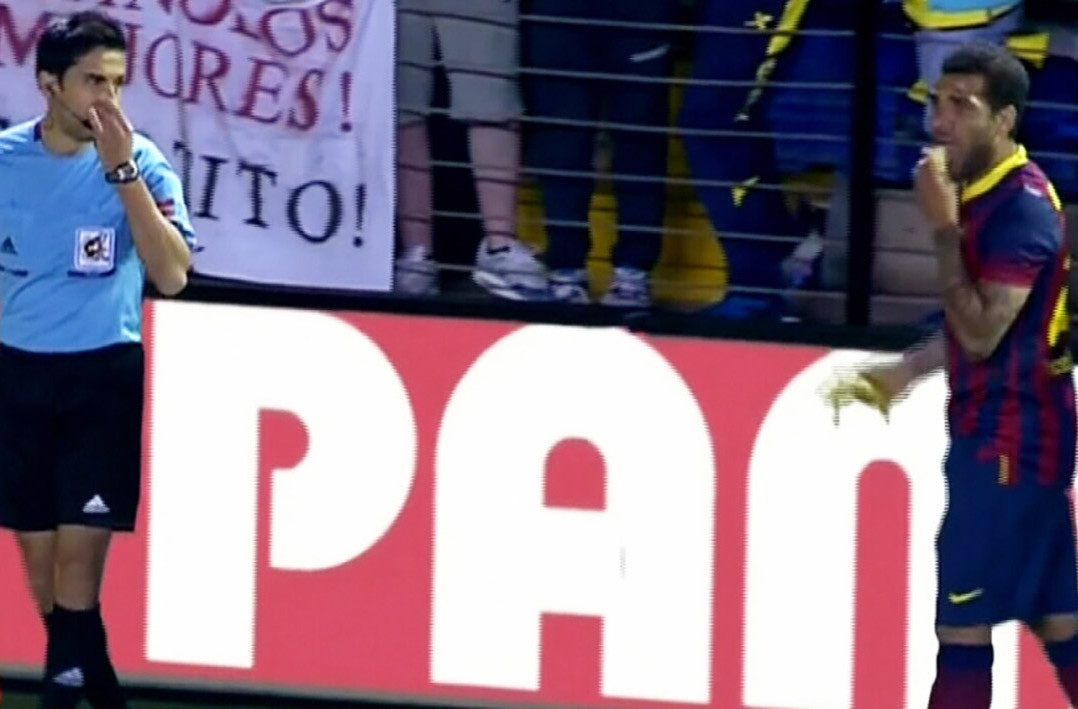 It’s no secret that FC Barcelona star Daniel Alves has struggled lately. Over the past few months, soccer commentators all over the world have blasted him for his patchy performances. But even the toughest critics were blown away by the Brazilian’s moves on the field in a crucial league game last weekend.

It all began on Sunday, when Alves, 30, was about to take a corner kick in a match against Spanish rival Villareal. Suddenly, one of the home team’s fans lobbed a banana at him on the field. No one missed the meaning of the prank. The offensive-minded right fullback, who has a dark complexion and no patience for bigotry, had repeatedly criticized Spanish soccer authorities for failing to speak out against racism.

Dani Alves picks up a banana during a match between Villarreal and Barcelona.

Refusing to be baited, Alves calmly scooped up the banana, peeled it, took a couple of telegenic bites and deposited the rest on the sidelines. Down 2-1, Barcelona rallied and went on to win 3-2, with two key assists by Alves. The win kept the Catalans in the chase for the title, and turned the ordinarily low-profile Brazilian veteran into a national hero.

FC Barcelona defender Dani Alves eats the banana thrown at him during the La Liga match between Villarreal CF and FC Barcelona.

At any other time, the whole matter might have ended right there on the field. But with the World Cup kicking off in Brazil in a few weeks, and racism seemingly on the rise in the globe’s most popular sport, the banana incident instantly went viral. Soon a legion of Brazilian athletes, artists and actors grabbed bananas and chomped away, starting a social media tsunami on sites such as Instagram, Globo, UOL and Folha.

Fellow Barca star Neymar da Silva Santos Júnior, above, took the first bite, posing with a fistful of fruit with his son. Neymar said he takes flak nearly every week for the color of his skin. Soon the Brazilian public relations firm Loducca jumped in the fray, launching a national marketing campaign under the hashtag #weareallmonkeys.

Global soccer stars like Mario Balotelli, below, Luis Suarez and Sergio Aguero also reached into the fruit basket to side with Alves.

Even Italian Prime Minister Matteo Renzi posed for a snapshot, banana in hand.

Of course, some Brazilians blanched at the campaign, fearing it would backfire and perhaps lead to more racism. The blowback was so virulent that celebrity TV host Luciano Huck decided to scrap his plans to distribute “We are all monkeys” T-shirts.

Others railed against the initiative, calling it demeaning. “Are we all monkeys, Neymar? No, we are all racists here,” says Professor Renísia Garcia, head of the center for African-Brazilian studies at the University of Brasilia. “In Brazil people are also called monkeys. When a police officer asks a black person, ‘Is this car yours?’ it’s no different from throwing a banana.”

Even Brasília got into the act. “It is a very powerful image,” said Luiza Bairros, the country’s minister for minorities. “You can’t assure it will succeed in reversing the negative meaning of the word monkey in association with blacks.”

“Racism is an open wound in Europe, with serious incidents in Brazil, too,” Romário says. “Unfortunately it is all over football. They target the best players because they want to make them weaker. They can’t win.”

For all the fury over hate and hooliganism in Europe, even Brazil, a country that’s home to black superstars like Pelé, Mané Garrincha and Didi, has its share of public racism—even though racist taunts are technically illegal.

In March, supporters of Esportivo, a team from southern Brazil, called a referee a monkey and placed bananas on his car. Elsewhere, a lesser-known left fullback named Francisco Assis had hardly taken to the field when he was met with a chorus of “monkey,” “nigger,” “bastard” and “smelly.”

Dani Alves of FC Barcelona celebrates after scoring his team's first goal during the La Liga match between Villarreal CF and FC Barcelona.

Back in Barcelona, Alves hasn’t blinked since the incident. “You have to laugh at those idiots,” he said after the match. “I have to thank whoever threw [the banana] because it gave me energy for two other crosses that ended in goals.”