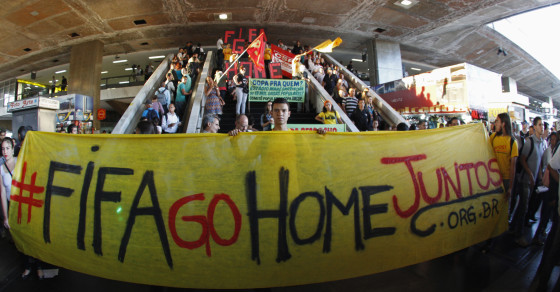 Brazilians Are So Angry at Their Government, They’re Rooting for Argentina
By Versha Sharma

Brazilians Are So Angry at Their Government, They’re Rooting for Argentina 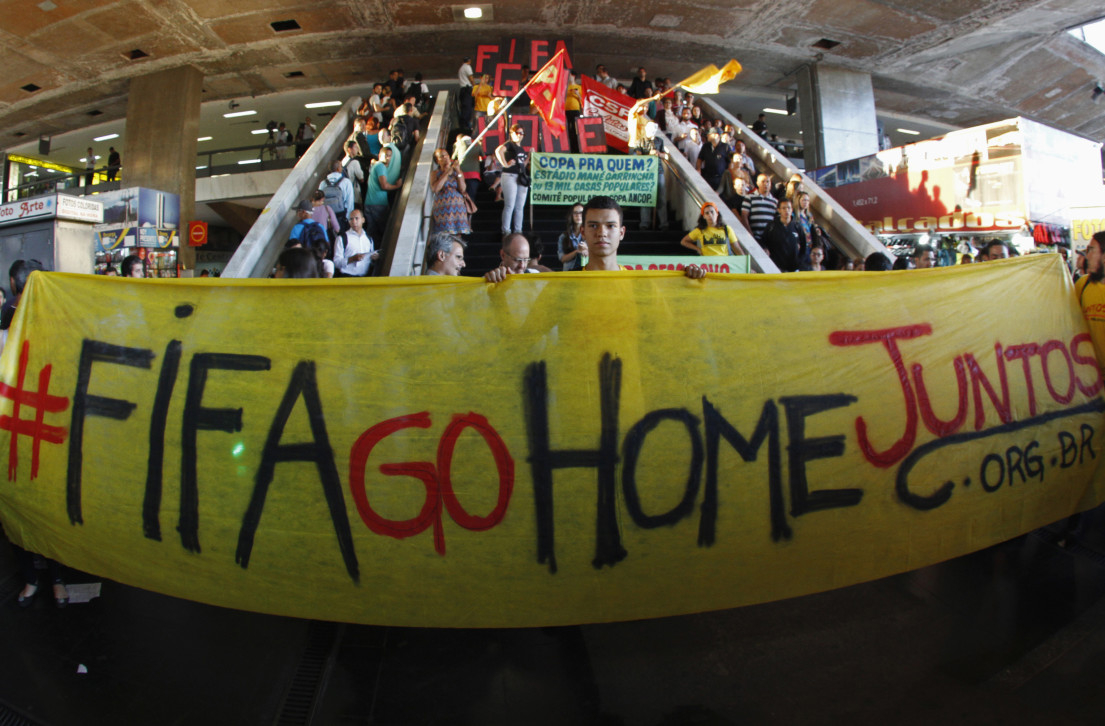 The 2014 World Cup kicks off in Brazil next week, and it’s shaping up as a repeat of the Sochi Olympics in Russia earlier this year. That is to say, another global sporting event is being held in a country where much of the populace is angry that they’re hosting it.

Brazil has poured an estimated $11.5 billion into stadiums and infrastructure projects for the World Cup, but many of them are not yet completed. In addition to missing deadline after deadline, the Brazilian government faces countless disaffected citizens who stand to reap little economic benefit from the World Cup, according to the Wall Street Journal, despite the record amount of money being spent on the tournament.

About $3 billion of that record spending money comes from taxpayers, and the government waste has sparked ongoing protests in many of Brazil’s big cities for over a year now. The Economist calls it “the greatest social unrest Brazil has seen in two decades.”

A demonstrator shouts during a protest this week against the 2014 World Cup.

Recent polls found that Brazilians have grown tired of the street protests. Maybe it’s fatigue, or perhaps Brazilians are marshaling their collective energy to stage rallies during the World Cup. In the meantime, a new form of protest has emerged in Brazil on Facebook, designed to mock some of the country’s most hated political figures and to criticize government policies. Brazilians began organizing flash mobs last week on the social network, and each event, it seemed, has attracted thousands of RSVPs. The thing is, none of the events are real.

The Mayor Eduardo Paes of Rio de Janeiro is the target of a satirical Facebook page.

One such event is centered on the mayor of Rio de Janeiro, Eduardo Paes. Paes once jokingly commented that he would kill himself if archrival Argentina beat Brazil in the World Cup. In response, Rio local Andre Nicodemus created an event page called “The Suicide of Eduardo Paes.” The happening, scheduled for July 14, the date of the World Cup final, currently has 5,000 people listed as attending. All of them will presumably be cheering for Argentina to win, and not Brazil, so that Paes can fulfill his promise.

The page even includes suggestions for how Paes can take his own life, such as “accidentally” entering a dangerous favela, like Complexo da Maré, where an engineer was recently shot in the face after having taken a wrong turn going to Rio’s international airport.

Why is Paes so unpopular that thousands of people would want him dead? Paes is considered responsible for displacing some 19,000 poor people from their homes in the city ahead of the World Cup to make way for roads, parking lots and other infrastructure projects related to the competition. Amnesty International has criticized the mayor, noting that he neither gave advance warning about the mass evictions nor held talks with the affected communities.

Demonstrators burn a Brazilian flag on May 24 during a protest against the 2014 World Cup in São Paulo.

Another target of scorn is President Dilma Rousseff, whose approval ratings have recently fallen. A page promoting a “goodbye party” for Rousseff already has over 6,000 likes, even though it was created just a week ago. The event description advises attendees not to drink, so they don’t forget her misguided policies of the last three years.

President Dilma Rousseff of Brazil speaks this week during a World Cup ceremony.

Yet another type of event is pegged to the country’s much-criticized public transportation system: an inauguration party for a bullet train that connects Rio de Janeiro and Sao Paulo. The train was schedule to be completed by June 1, but the project has been delayed at least three times. No one seems to know whether or not the new rail system is actually happening, though the parody inaugural—with an open bar!—has more than 168,000 RSVPs.

These online flash mobs have an innate appeal. It’s much easier to signal one’s discontent by clicking a button on Facebook than by attending an actual event. Despite their popularity, it’s hard to imagine they’ll affect the same kind of change as one of Brazil’s recent real-life rallies. Tens of thousands of protesters took to the streets last summer, angry about a rise in bus fares in São Paulo and Rio de Janeiro. The protests persisted for much of June 2013, and city officials eventually relented and revoked the fare hike. Another street protest to commemorate that victory—and demand universal free public transportation—is planned for June 19 of this year.