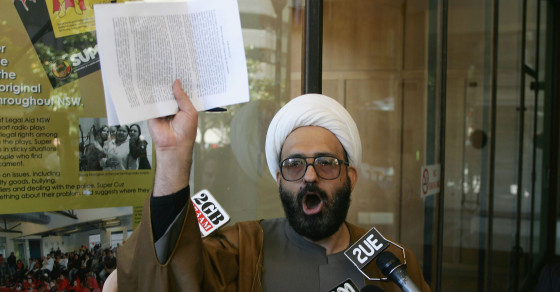 The man responsible for the Sydney hostage siege that left him and two hostages dead in a café Monday seems to have acted as a lone wolf, experts say, but doesn’t appear to have any connections to the Islamic State. Despite the fact that a hostage reported from the scene that Haron Monis was requesting an ISIS flag, and that his actions constituted an official Islamic State attack on Australia, members of the ISIS online forum Tribune Media Jihadist do not claim he is one of theirs. In fact, they’re a bit baffled as to what all the fuss is about.

Using four of his hostages as proxies, Monis had them deliver messages to a camera, and the messages were then posted on YouTube. He stated that the hostage-taking was “an attack by the Islamic State on Australia” and demanded that a black flag of jihad be provided as one of his conditions, leading many to believe that this attack was linked to ISIS.

Initially, while his identity was still unclear, comments on jihadi forums often used by ISIS supporters and organizers appeared happy to claim his actions, but when it emerged that he was Iranian-born, and thus likely a Shiite Muslim, things became muddier.

Self-styled cleric Man Haron Monis speaks to the media after he had been charged with seven counts of unlawfully using the postal service to menace in November 2009.

One consistently anti-Western ISIS forum member looked at how the Western media supposedly changed its coverage of the hostage siege upon finding out that Haron Monis was not a member of ISIS but rather an Iranian-born Shiite. He accused the American press of bias against ISIS and of changing its tone toward Haron Monis—going from thinking he was a reprehensible terrorist to believing he was mentally unstable and therefore forgivable. Another claimed that linking him to ISIS was a creation of the media, borne out of an inability to identify him or his nationality.

Haron Monis’ Muslim credentials have been called into question before. In an Australian blog about the Muslim community called Austrolabe, a frequent writer under the username Baybers wrote a list of the inaccuracies in Haron Monis’ personal website that, it was claimed, outed the self-styled cleric as a fake Muslim. Baybers points to red flags such as how Haron Monis spells his name in a weird way—because Muslim names would more likely be spelled “Harun” or “Haroon,” the Arabic equivalent of the Hebrew “Aaron.” Haron Monis also did not begin his website with the phrase: “In the name of Allah, the most beneficent, the most merciful,” and according to Baybers, it would be impossible for a Muslim religious scholar to fail to do that. His “fatwas,” or learned statements on Islam, are “completely wrong—and wrong in the most infantile manner. The author of the Sheikh Haron site is obviously not a religious scholar, and has designed it to perpetrate a fraud and cast a cloud over the Muslim community,” Baybers writes.

Another theory derived from the black sweatband worn by Haron Monis, with white Arabic text on it. One expert tweeted a hypothesis on why he believes Haron Monis is representing Hezbollah, based on the slogan written on the sign he used when he took the café hostage:

Whatever his religious pedigree, his identity and rap sheet are in no doubt. Australian authorities were already well-aware of Hans Monis. Born in Iran, he sought political asylum in Australia in 1996. By the time he lost his life in a chocolate café shootout, he had 40 sexual and indecent assault charges lodged against him, was found to be an accessory in the murder of his ex-wife, and had written several extremely offensive letters to the families of Australian soldiers who died in Afghanistan. The 50-year-old Muslim “cleric” (largely self-declared—his religious credentials have been downplayed by Muslim leaders in Australia) had a large online soapbox to express his sometimes erratic beliefs. Before it was shut down Monday, he had amassed over 14,000 likes on his Facebook page, where he would write about how the police were in a witch hunt against him for his beliefs in black magic and Islam.

He wrote a letter to Prime Minister Tony Abbott of Australia in November 2013, challenging him to a debate on the Afghan war. He argued Australia’s policy in Afghanistan had played “a significant role in jeopardising security and peace in the world especially in Australia,” according to The Sydney Morning Herald.

Most recently, Monis wrote on Dec. 14 on his personal website:

“Islam is the religion of peace, that’s why Muslims fight against the oppression and terrorism of USA and its allies including UK and Australia. If we stay silent towards the criminals we can not have a peaceful society. The more you fight with crime, the more peaceful you are. Islam wants peace on the Earth, that’s why Muslims want to stop terrorism of America and its allies. When you speak out against crime you have taken one step towards peace.”

He praised ISIS on his Facebook page, according to The Sydney Morning Herald, but prevalent members of the ISIS online forums mostly kept a distance from him Monday.