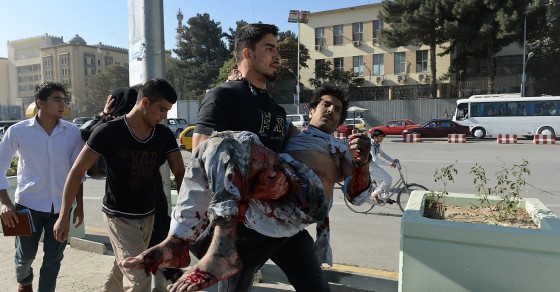 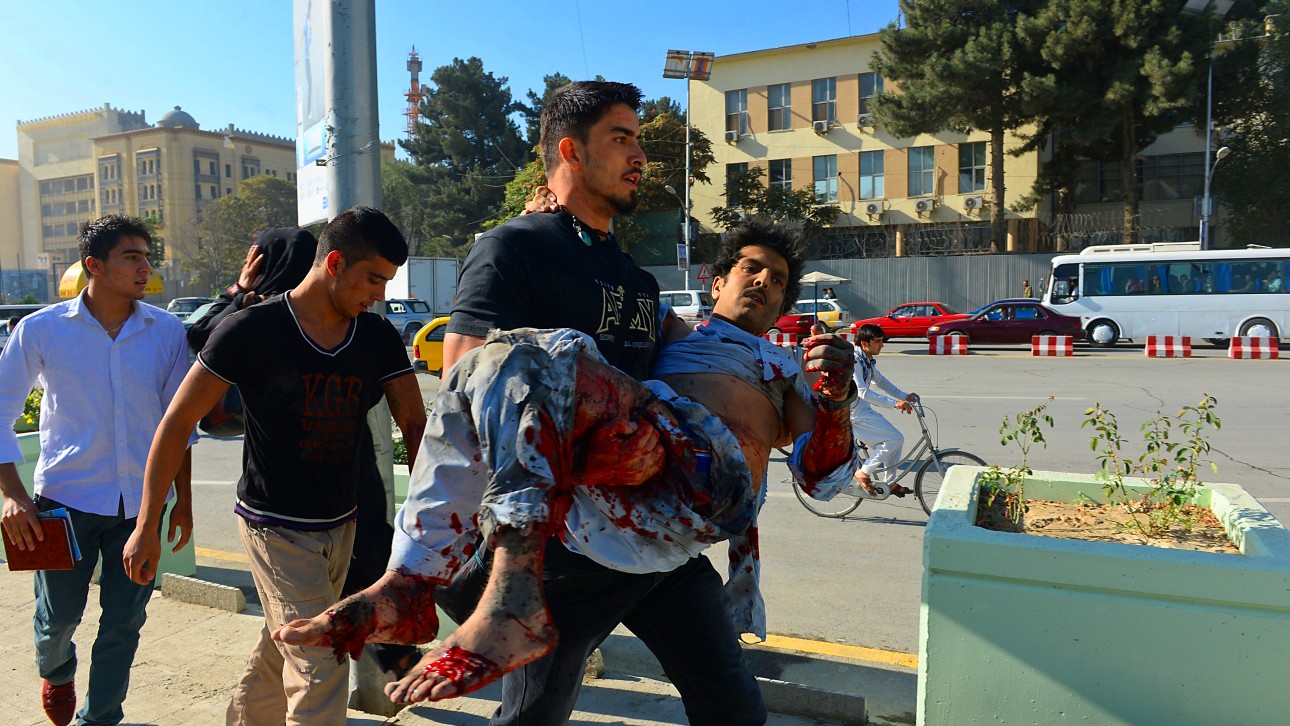 KABUL, AFGHANISTAN—In a small, sparse cell inside a detention facility here in the Afghan capital, a young disabled man in a baggy brown uniform limped toward me, his feet bent and crooked, his arms outstretched like Frankenstein’s monster.

Sitting in the cell were two Afghan intelligence officers. The young man—who goes by a single name, Wajed—looked at them nervously as he sat near them on a bare mattress. His voice was soft like a child’s, and there was nothing in his expression that offered a hint of his crime.

Nearly four months ago, on orders from the Taliban, the 20-year-old Pakistani native tried to kill an Afghan official in a suicide attack. The goal of mission, his handler told him, was to stop foreign incursions into Afghanistan. That was all he knew. “I didn’t know Afghans were Muslim,” Wajed says. “I didn’t know that in Afghanistan people read the Quran and prayed.”

When we met, Wajed was being held at a detention center for suspected criminals captured by the nation’s spy agency, the National Directorate of Security. While in custody, Wajed had become part of a program intended to re-educate the armed opposition. Its goal is to take suicide bombers, among others, and show them how their actions are against Islam.

A day after a new president took office in Afghanistan, and with the United States ready to withdraw the bulk of its troops on the ground, the future of Afghanistan hangs in the balance. The government is trying to end its decade-long conflict with the Taliban. But in recent months, the group—allegedly with the help of Pakistani intelligence—has launched attacks in key battlegrounds such as Helmand province, where so far, more than 200 members of the Afghan Security Forces have died in battles against insurgents in the country’s south.

Shattered glass at the scene of a September suicide attack in Ghazni, Afghanistan.

As the fighting continues, many officials here in Kabul believe that the best path toward peace is to target the Taliban’s foot soldiers—the young men who carry out suicide bombings and plant land mines—who continue to take the bulk of the lives of ordinary Afghans. Doing so, however, remains a daunting task, as the recruits are motivated by ideology.

“It can be a dangerous effort in too large a scale, especially before it has proven results,” says Daveed Garenstein Ross, a senior fellow at the Foundation for Defense of Democracies, a conservative think tank based in Washington, D.C. “The biggest danger is that if you’re giving people release that they…go back to the fight.”

The program isn’t without precedent. Singapore has the best track record, Ross says, while Yemen’s has had problems with recidivism. Saudi Arabia has put its vast oil wealth to use in trying to develop successful rehabilitation programs, offering people money and employment if they turn away from their radical roots. But it’s hard to know how effective it has been, critics say, because the country may still be playing a double game, rehabilitating people on one hand, but supporting radical Sunni groups such as ISIS on the other, as part of a wider anti-Shiite agenda. (The Saudi government denies this.)

Afghanistan has its own model for rehabilitation. It largely consists of hour-long classroom sessions with a mullah who offers lectures and readings from a library full of religious texts.

An Afghan security guard stands at the site of a suicide attack in Ghazni, Afghanistan, in September.

Several months ago, I decided to sit in on a rehabilitation class, joining about two dozen prisoners in a cramped classroom. I listened silently as a mullah spoke, emphasizing that the vast majority of Afghanistan’s 32 million people are Muslim—a not-so-subtle affront to what would be bombers learned in Pakistan.

The students responded to the teacher, but as they spoke, their heads were hunched, their eyes wandered and their bodies were slouched—all signs of disrespect in a normal Afghan classroom. Few seemed actively engaged in the discussion.

“If you’ve been through a lot of indoctrination,” says Ross, “it’s very hard to be dismayed.”

Part of the challenge, analysts say, is that the Taliban targets drug addicts or people with mental or physical disabilities; few, if any, have any formal education.

“These are the kinds of unfortunate souls they choose,” says an Afghan intelligence official who asked not to be named because he was not authorized to speak to the press.

Waheed Mozhdah, a former official in the Taliban government, denies that the armed opposition purposely recruits the disabled and addicted.

A man wounded by a suicide attack in Kabul in September.

“It’s not true,” he says. “People also say these attackers are under the influence of drugs, but that’s not true, either. Someone has to be fully mentally prepared to engage in such an act.”

That remains to be seen. Either way, the Taliban appears to be employing fewer and fewer suicide bombers. But the ones who are used seem to be hardcore believers. “In the beginning of the war, they used to just throw a suicide vest on anyone who came along,” says Mozhdah, the former Taliban official. “But in later years, Mullah Omar gave specific directives that people be highly trained and capable.”

The courting process for potential suicide bombers has also become more rigorous. Two years ago, Samiullah, who goes by one name, was an unemployed metalsmith living in the northern Pakistani city of Peshawar when he began to form a bond with the man who would give him his first insights into the Taliban.

His new friend, a religious scholar from Afghanistan, told him that he could teach him about Islam. Barely into his 20s and down on his luck, Samiullah wanted to learn more about religion. “He called me saying, ‘Leave the work of this world behind and come to the madrassa,’” Samiullah says of his friend. “‘Learn to make jihad.’”

Analysts say people like Samiullah are prime targets, that their lack of fulfillment makes them easy prey for groups such as the Taliban. Indeed, it’s the “people who feel they have no other option,” Ross says, who find the rhetoric of a religious duty to be the most appealing.

“Extremist propaganda tends to say that Islam isn’t being followed anywhere” and that it is the duty of a true Muslim to stop those who lead Muslims astray, he adds.

For 14 days, Samiullah’s friend gave him a crash course in martyrdom. He read selected texts, watched videos of foreign attacks on Afghan homes and listened to his friend lecture him about how to defend his nation against foreign, non-Muslim invaders. All of it was meant to impel him to act, to make him willing to give his life for the sake of his religion.

Before long, Samiullah’s friend sent him to Miramshah, a largely religious community in North Waziristan, a region in northwest Pakistan along the Afghan border. There, Samiullah learned about weapons: from Kalashnikovs to rocket launchers. “We learned about it all,” Samiullah says. “The Afghans taught us about spiritual matters, the Pakistanis about weaponry.”

In the end, Samiullah was sent off on his own suicide mission. But before he could attack his target, another Afghan official, the authorities caught him and sent him to the rehabilitation program.

Back in Wajed’s cell, the prisoner recounts his story as the intelligence agents take careful notes. Like many would-be suicide bombers I’ve met, Wajed was given very few instructions. He was indoctrinated in Pakistan by religious leaders who he says were affiliated with the Afghan and Pakistani Taliban. Then, at a certain point, one of those trainers sent him to a safe house in Kabul for an unknown mission. He waited there for 10 days before another Taliban operative told him he would be targeting infidels. Then, one morning, they strapped him with a suicide vest and gave him his target, a man he had never even heard of before. “I forget his name,” Wajed says. “All I know is that I was told he’s a kafir [infidel] who commands over Afghans.”

Afghan policemen stand guard at the site of a suicide attack near the international airport in Kabul in September.

Maybe it was because he had trouble walking with his disability. Or maybe he simply felt nervous listening to the call to prayer echo from Kabul’s various mosques. But after the police saw him ambling around northern Kabul, they arrested him and he quickly confessed.

Wajed says he wasn’t tortured, and the Afghan intelligence officers watching him agreed. But Mozhdah, the ex-Taliban official, says that in many instances, would-be bombers return to the fight in part because they’re mistreated by their Afghan captors. Some are even trained to resist indoctrination.

“In the jihad [of the 1980s], these people were caught, too,” he says. “And the same types of people were in charge of intelligence.”

Mozhdah says some of the same interrogation tactics used against jihadi fighters by the communists running Afghanistan at the time are still being used by the government today.

He’s not alone. The United Nations and other human rights groups have said the Afghan intelligence agencies use torture and abuse—electric shock, genital twisting and extracting fingernails—to get suspects to talk.

Either way, as we sat in his cell with the Afghan intelligence officials still watching, Wajed expressed regret for what he tried to do. “Suicide bombings,” he says, “are haram [sinful].”

As I left the cell, and Wajed disappeared behind a series of iron gates, I had to wonder: Had this frail disabled outsider really repented? Or was he simply pretending, either to avoid a beating or because he was still a true believer? In any case, I felt, he remained pawn in someone else’s game, a dangerous one that will determine the future of this war-torn country.