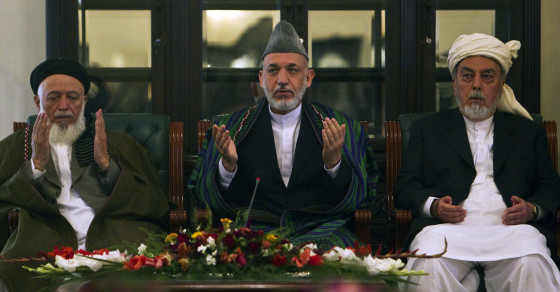 Exclusive: Peace With the Taliban?
By Sam Seibert

Exclusive: Peace With the Taliban? 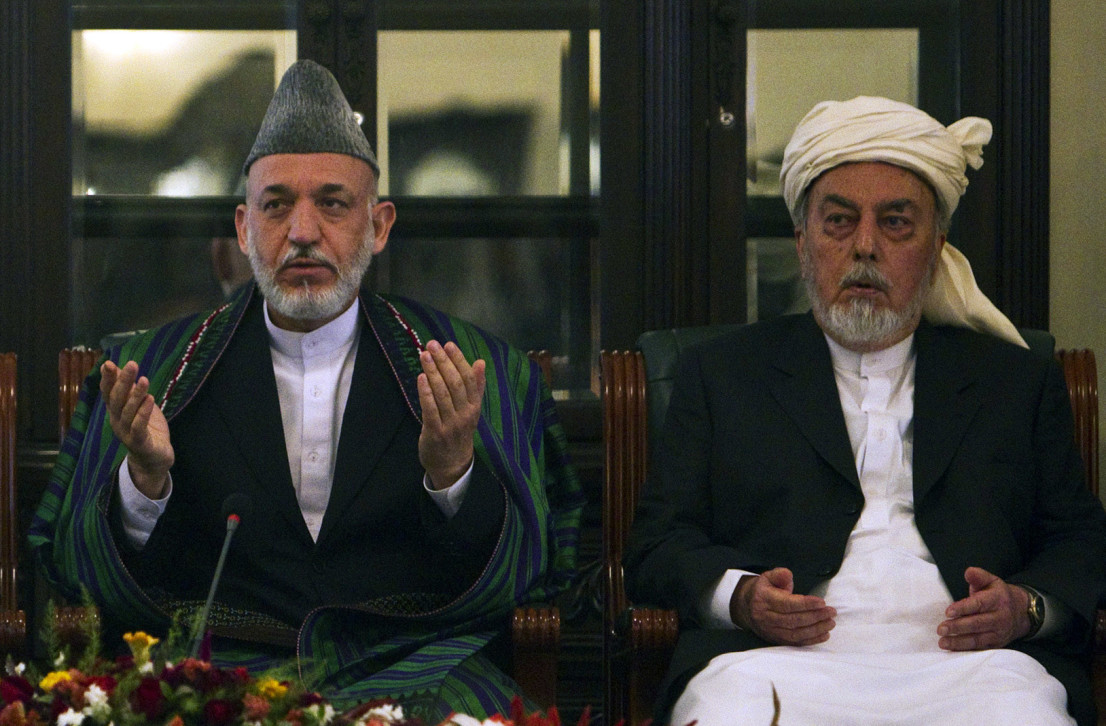 For years, the prospect of peace in Afghanistan has been nothing more than a cruel illusion. And today, as the violence continues, Afghan officials remain haunted by the opportunities that ultimately proved too good to be true: the shopkeeper who posed as a Taliban emissary, only to bilk negotiators for thousands of dollars; the “peace envoy” who delivered a message to officials in Kabul in the form of a suicide bomb.

Now, however, insiders say peace—or at least a thaw—has become a real possibility, edged forward by secret talks to cancel the Afghan presidential election, as well as the second coming of a fallen Taliban kingmaker. Everything depends on what the insurgents decide before the nation votes on April 5.

Members of the Afghan High Peace Council at the presidential palace in Kabul.
(Reuters/Ahmad Masood)

The Afghan High Peace Council—the group tasked with negotiating with the Taliban—has been covertly urging the group’s top leaders for months to enter formal peace talks, according to sources close to both camps.

While there have long been rumors of a reconciliation between President Hamid Karzai and the Taliban, this time there could be a real incentive for an arrangement. Kabul’s envoys have warned the Taliban’s ruling body, the Quetta Shura, that none of the candidates vying for the nation’s highest office has the political strength to offer an agreement as generous as the one President Karzai could put forth.

Here’s how the deal could work: Afghanistan’s constitution bars Karzai from seeking a third term as president—but it does empower him to suspend elections in the event of a national emergency. After more than three decades of war, few things seem more urgent than a serious Taliban peace initiative. So subject to the approval of a nationwide group of tribal elders, Karzai could remain in power until a final agreement is signed, even if the process takes years.

Aimal Faizai, a spokesman for the president, flatly denies that Karzai would consider such a move. But insiders say the Taliban got the message: For the sake of a peace deal, Karzai was and is ready to delay the vote. “The election may be a constitutional requirement, but peace is more important to the Afghans,” says a senior Karzai aide.

In light of these covert peace efforts, Karzai’s recent behavior makes much more sense. Late last year, he blindsided U.S. officials by announcing that he wouldn’t sign an agreement permitting thousands of American soldiers to remain on the ground after the bulk of U.S. troops pull out later this year. “Ever since then, Karzai has been particularly strident,” says Michael Kugelman, a senior South Asia analyst at the Woodrow Wilson International Center for Scholars. “It seems he’s serious about moving toward the Taliban.”

Last month, the Afghan government decided to free 65 prisoners—many of them insurgents—over the objections of the United States. Kugelman says the move wouldn’t make sense if the Afghans weren’t trying to get the Taliban back to the peace table.

Sher Mohammad (left), one of the 65 prisoners released last month by the Afghan government.
(Reuters/Ahmad Nadeem)

Despite Karzai’s best efforts, there’s no guarantee that talks with the Taliban will succeed. And if they fail, the beleaguered Afghan leader will have jeopardized democracy in Afghanistan and perhaps further antagonized the U.S.—his country’s most important ally—for nothing.

The U.S. has “long supported Afghan-led reconciliation efforts,” says a senior Obama administration official, but “credible, timely elections are critical to Afghanistan’s future peace and stability. Those efforts should go hand in hand.”

For all the risk in Karzai’s plan, his government does have considerable leverage against the Taliban. The Quetta Shura is staggering under a financial crisis and can barely pay its fighters in the field. At the same time, the Afghan government’s forces are stronger, better trained and more professionally equipped than they were just a year ago. Even now, independent military analysts agree that the insurgents have nowhere near the firepower necessary to reclaim control in Kabul. And the Taliban can’t expect a better negotiating partner than Karzai, who likes to call them “my brothers.”

Privately, many Taliban fighters say their goal is to get the foreigners out of Afghanistan.
(AFP/Getty Images)

In fact, the Afghan leader has sworn that if he stays in charge, all U.S. military personnel—not only fighting forces, but trainers, advisers and anyone else—will be gone before next January.

For years, many rank-and-file Taliban have privately said their only goal is to kick the foreigners out of their country. Unlike Karzai, every one of the presidential candidates has promised to sign an agreement that would keep at least some U.S. troops on the ground. “The Taliban need to show some flexibility for the sake of peace and stability in Afghanistan,” says a member of the Afghan High Peace Council. “If they don’t, it will be their fault when the Americans don’t leave.”

Yet Taliban hard-liners aren’t interested in any deals with Karzai. To them, he’s nothing more than an American collaborator; if peace means sharing power, they prefer war. Besides, they worry about losing their safe havens in Pakistan if the fighting stops. Although Islamabad denies controlling or supporting the Taliban, analysts say that Pakistan’s powerful Inter-Service Intelligence agency (ISI) has long used the Afghan insurgents as a proxy of sorts. The ISI’s fear seems to be that resolving the war would reduce its influence in Afghanistan and enable the government in Kabul to focus on other longstanding grievances, such as the border between the two countries, which the British Empire drew more than a century ago.

“No separate negotiation will succeed in defusing this conflict if the ISI isn’t getting what it wants,” says Sarah Chayes, a senior analyst for the Carnegie Endowment for International Peace and a former special adviser to the U.S. Joint Chiefs of Staff.

Realizing that a quiet Taliban outreach might fail, Karzai apparently has a fallback plan. For months, the Afghan High Peace Council has been openly negotiating with a former Quetta Shura member and longtime associate of Taliban founder Mullah Mohammed Omar. His name is Agha Jan Mutassim, but friends and foes alike simply call him Agha Jan. “Karzai has finally found someone who can turn the Taliban against itself,” says an Afghan insurgent leader in Quetta, the city in southwest Pakistan where the Taliban’s headquarters is located. “And that is Agha Jan.”

He certainly has the credentials for the job. Agha Jan was barely in his teens when he joined the war against the Soviets in the 1980s, and he fought alongside Mullah Omar, who in those days was just another foot soldier.

The two remained close after the Soviets left. And when the Taliban took over Kabul in 1996, Agha Jan was selected to run the country’s Treasury. In the wake of the 2001 U.S. invasion, Agha Jan fled to Pakistan with other Taliban survivors and made it his personal mission to rebuild the group and drive the Americans out of Afghanistan.

A few years ago, however, he decided that the war was only adding to the country’s woes. Around the same time, Taliban hardliners said he had looted the Afghan Treasury before escaping the U.S. assault. Agha Jan denied the charges, saying he used any money he took with him to help fund the Taliban’s revival. But the Quetta Shura voted him out of the group.

The Taliban leader kept urging his fellow fighters to seek peace—and in August 2011, an unidentified gunman pumped him full of bullets, leaving him for dead on a street in Karachi. He flew to Turkey for medical treatment, where he’s since made a home. He still calls himself a committed member of the Taliban, but continues to call for an end to the bloodshed.

Although many Taliban privately admire Agha Jan’s courage, the Quetta Shura denounces him as “a stooge of the Americans.” A few weeks ago, a senior Taliban mullah assured a gathering of Afghan insurgents that killing any friend of Agha Jan’s would be a blessed deed.

On his part, the exiled Taliban leader says that he’ll stop advocating for peace as soon as Mullah Omar publicly tells him to. That’s not likely: There hasn’t been a verifiable message from Mullah Omar since he vanished into the mountains outside Kandahar in late 2001.

In the end, Agha Jan may be Karzai’s best hope for peace, even if it means that voting goes ahead as planned. Taliban sources say the Quetta Shura voted down Kabul’s latest peace overture a few days ago, although the Afghan High Peace Council has yet to receive a formal reply. Meanwhile Karzai’s aides continue to hope the Taliban will reconsider before the election next month.

Whatever happens, Karzai’s aides and members of the Afghan High Peace Council say Agha Jan deserves a prominent role in the new government. They hope that someone of his stature could inspire a major split between Taliban who blindly obey the Quetta Shura and the insurgents who want peace above all else.

Bridging that gap, like anything in Afghanistan, won’t be easy. But one thing seems almost certain: Election or no election, Karzai won’t fade into the background. Even now, as he appears to be throwing his weight behind the candidacy of Zalmay Rassoul, his longtime friend and former foreign minister, workers are busy renovating a mansion for the outgoing Afghan head of state.

Its location? Right next to the presidential palace.

With R.M. Schneiderman in New York