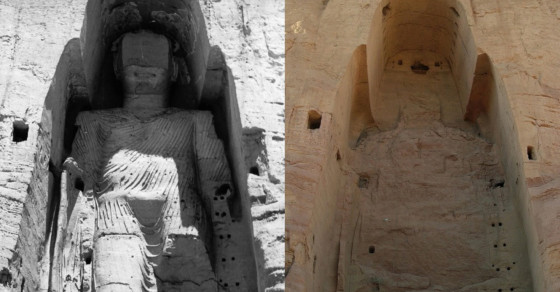 Meet the Guys Who Helped Blow Up the Famed Bamiyan Buddhas
By Ali M. Latifi

Meet the Guys Who Helped Blow Up the Famed Bamiyan Buddhas 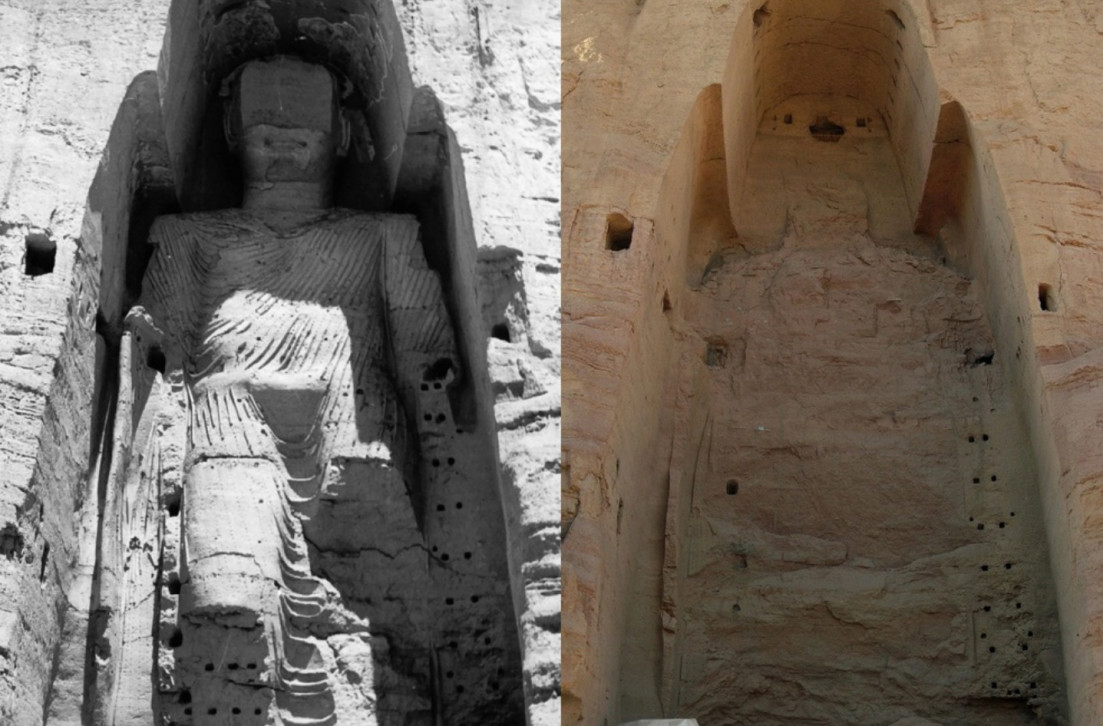 BAMIYAN, AFGHANISTAN—Sayed Merza Hossain crouches on a dirt and gravel hill. Behind him is the maze of steel pipes and stacked wood boards from the scaffolding that fills the gaping hole left by the massive ancient Buddha statues he says the Taliban forced him to blow up more than a decade ago.

The 40-year-old, who now works as a bicycle repairman in the local market, says he regrets what he did as a Taliban prisoner over the course of 25 days in March 2001, and yet he’s almost eager to recount the story of how the statues, carved into the limestone cliffs back in the fourth and fifth centuries, were erased from the face of the earth.

Screen grab from a CNN video showing the giant Buddhas of Bamiyan being destroyed by the Taliban in 2001.

In fact, he has the story down to an art. “Meet me in front of the [larger] Buddha at 4 p.m. The light will be perfect for your footage,” he tells me when I asked to interview him in July. As he recounts a story he has told countless times, Hossain stares straight out into the potato field-covered valley ahead. Only rarely, when he needs to convey the magnitude of what happened, does he turn to face the vacant niche behind him. “Half of my home, my country, was destroyed.”

It’s a reference to the statues that for centuries looked out onto the province, but it could also speak to the many conflicts that have ravaged Bamiyan. They span Genghis Khan’s brutal takeover of the now-ruined citadel city of Gholghola, the jihad against Soviet occupation, the civil war that followed, the rise of the Taliban and the U.S.-led invasion of 2001. UNESCO declared Bamiyan a World Heritage Site in 2003, but efforts to rebuild the Buddhas have stalled in part because so little of the original statues remains.

There’s hardly any doubt that the Taliban orchestrated the demolition of the Buddhas in a quest to rid the world of any religious symbols that weren’t Islamic. But how they actually did it during those few weeks in 2001 has always been something of a mystery.

I had heard countless secondhand tales over the years. But this summer and fall, I went to Bamiyan to try to piece together the story myself. While there, I found several people who claimed to have played a role in blowing up the statues. Over the course of 10 days, each told his own Rashomon-like tale. As with any mystery, as some things became clearer, others became murkier.

Hossain describes a decades-long familiarity with what were once the world’s tallest standing Buddha statues, at 150 feet and 120 feet, carved directly from the majestic cliffs, with a coating of paint applied to their heads to enhance their facial expressions. He recalls the three-hour walk from his home village to the weekly market in front of the monuments.

Sayed Merza Hossain sits in front of the scaffolding.

It was during those trips that he saw foreign tourists from then-Soviet states, as well as Germany and Japan. “We had a sense that these must be important symbols in the world that people from so far away would spend their money to see them,” Hossain says.

During the decades of violent conflict in Afghanistan, war and poverty forced Hossain to take residence in the small caves that dot the cliffs between the two statues. In those years, two of Hossain’s children, aged 3 and 7, died from cold and hunger. He says he buried them near the same dirt paths along which he later carried the explosives that ultimately blew up the Buddhas.

In 1998, Hossain says, the Taliban arrested him. “My only crime was being a Hazara,” he says of his capture. “They would say: ‘They are Hazaras. They are infidels. They worship Buddhas.’” Throughout much of Afghan history, the Hazara, an ethnic group that makes up the majority of Bamiyan’s population, were persecuted and made into the servant class of a mainly Pashtun elite.

For three years, he says, he was detained in a single room with 110 other mainly Hazara prisoners. He says he saw a fellow prisoner suffer a heart attack as he was lifted by a rope to plant explosives at the head of the statue.

Others I spoke with also remember a distinct hatred among the Taliban for the Hazara people. This anger, says Janan Attahi, a Tajik day laborer in his mid-40s, was in response to the slaughter of dozens of captured Taliban prisoners by Hezb-e Wahdat, a Hazara-led militia. “When they came to Bamiyan, the Taliban said to the Tajik people: ‘Find us an Hazara and we will give you 1, 2 million Afghanis so they could kill them,” says Attahi. “They would kill Hazaras for sport—it became like a game for them.”

Soldiers belonging to Shiite faction Hizb-i-Wahdat on patrol in 1997 in front of the Buddha statues. The Taliban's supreme leader, Mullah Mohammad Omar, ordered the destruction of all statues in the country in 2001.

Yet Attahi doesn’t buy the prison part of Hossain’s story. He says it doesn’t make sense, given how the Taliban loathed the Hazara. “Imagine them keeping and feeding more than 100 Hazaras in prison for several years,” he says.

Though it appeared that Hossain may have been embellishing some things to play to his audience—and earn bigger tips—other accounts seem to back up some details of his story.

The Taliban had initially fired at the statues with everything from assault rifles to stinger missiles and RPGS, all to little effect. Then, Hossain says, he and others were forced to plant explosives at the base of the statues. “The first explosion set the whole area on fire, but it only cut off two of the legs,” he says of the larger Buddha. The few Afghan Taliban remaining at the site then got the help of foreigners, who launched rockets and canons at the Buddhas, Hossain says.

Like so many other Bamiyanis I’ve spoken to over the years, Hossain insists it was Arabs in “long robes” who oversaw the destruction of the Afghan monuments. “These were foreigners, speaking different languages, who ruined our historical site,” he says.

Abol Karim, who lived nearby, was 17 when the Taliban made him and 80 others raze the smaller of the two statues. Having seen his cousin killed in plain sight by the Taliban, Karim tells me he knew he had little choice when they rounded him up for an unknown task.

Karim also recalls the heavy foreign presence at the site of the smaller Buddha. “There were definitely [Pakistani] Punjabis among them.” Specifically, Karim tells of a mullah who “drove around in a red car” and spoke only Urdu, the national language of Pakistan.

Nader (who asked to go by one name) says he was part of a similar roundup, and worked from 7 a.m. to 4 p.m. at the site as part of the demolition crew. “They took us in Datsuns to help them bring the explosives, then we would dig the holes that they would be planted in.” In those nine hours, Nader says he saw no prisoners, but distinctly remembered the foreign advisers.

For one former Taliban official, though, the men’s stories are the same old propaganda espoused by Hazara bitter over losing control of Bamiyan when the Taliban arrived. Waheed Mozhdah, a former official in the Taliban Foreign Ministry, rejects the idea that the Taliban mistreated Hazara or that they imported foreigners to help blow up the statues. He tells Vocativ that it was Sherin Agha Salangi, an Afghan with “experience in explosives,” who advised the Taliban “on how best to destroy the Buddhas.”

As my interview with Hossain comes to an end, an old man, dressed in the traditional piran tomban, climbs to the hill we’re sitting on and asks simply: “Is this the way to the Buddha statues?”

The man, who’s in his 60s, says he packed his clothes in a black trash bag and made the six-hour journey from Kabul to see the statues. After Hossain drives off on his motorcycle, the man comes back down the hill. “As a child, I had heard about these statues. I told myself one day, before my life is over, I will go to see them. I only wish I could have seen them as they were.”