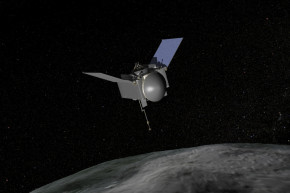 For insight into your horrifying future, spend a few minutes scrolling through Tinder while watching an American political panel show. For insight into the past, the distant past, before you or me or any human were a glint in anybody’s eye, we have to turn our eyes to space.

NASA seeks to explore an asteroid called Bennu, a mass of space rock virtually untouched since the solar system was formed. They’re sending a spacecraft named OSIRIS-REx to use spectrometry to map the asteroid and eventually gather a sample.