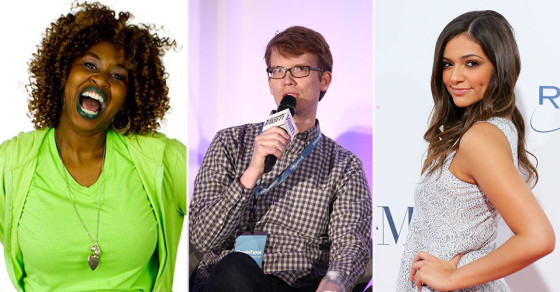 The YouTube Stars Interviewing Obama After The State Of The Union

Presidents have never been known for their accessibility, which isn’t especially strange. As a general rule, accessibility is inversely related to power. Why do you think the Wizard of Oz refused to step out from behind the curtain?

Over the course of his two terms, President Obama has developed a reputation for being particularly inaccessible to the media. The Washington Post suggested in 2013 that he might be “the least newspaper-friendly president in a generation.” But as the muscle of traditional media has deteriorated, a paradox has developed: Despite the Obama administration’s uncanny ability to shut out the press, it can’t protect itself from the realities and degradations of the digital age.

This Thursday, two days after President Obama’s State of the Union address, The Verge reports that the president will field questions from three of YouTube’s biggest stars: Bethany Mota, GloZell Green and Hank Green. They are, like, so millennial, but disregard them and their constituency at your peril—they command a YouTube subscriber base of more than 15 million combined. OMG. That’s a lot of (up)votes.

Mota is 19 years old, the youngest of the three, but arguably the most powerful in YouTube terms. Over the course of five years, she has ammassed more than 10 million subscribers across two channels and racked up close to 700 million views. Estimates early last year suggested she could be earning as much as $40,000 per month purely on advertising against her videos, which provide tips on grooming, fashion and recipes.

In a recent installment, “Five Easy & Fast Breakfast ideas for School!” she opens with a monologue apologizing for a prolonged absence from her channel: “I just want let you guys know this is not how it’s gonna be,” she says, sitting cross-legged on her bed. “I love making videos for you guys, and I want you guys to know that. You guys mean so much to me.” Later, she adds: “Pay no attention to what’s going on behind me because I’m actually redecorating my room, which means I am doing a room tour for you guys! If you guys want it, leave it in the comments below.” The video has been viewed over six million times, which is nothing for Mota, but still more than Vice’s critically acclaimed, searing viral documentary about ISIS.

Hank Green is 34 and has a Bill-Nye-meets-Silicon-Valley vibe. His brother, John, is the author of The Fault in Our Stars. Together, they form an eco-conscious duo, and their followers are known as “Nerdfighters.” Hank occasionally tackles serious topics, like the protests in Hong Kong, but just as often he strays in the other direction. He posted a video last week called “14 Fart Facts for my Flatulent Friends,” which included a note to his followers: “The crazy thing is I had to cut like five fart facts from this video because I just had TOO MUCH GOOD FART STUFF,” he wrote. “Maybe I’ll make a video with some more fart facts in the future.”

Unlike the others, Glozelle Green is not a millennial at all—she’s 52. Her channel is a vehicle for hammed-up comedy (see her announcement that she’d be interviewing the president, for example). Until today I’d never heard of her, and it turns out she occasionally has bodily issues on the brain, just like Green. A 2009 music video entitled “Is that Your Breath or did you Just Fart?” is a small, stripped-down masterpiece, viewed over 11 million times. It’s the kind of thing Adam Sandler might have recorded in the early ’90s, if he’d never gone mainstream or left his parents’ basement.

Thursday’s interviews will take place in the White House, and the three interviewers will ask questions on behalf of their subscribers. (What I wouldn’t give to see Nixon in this position.) Topics will likely include net neutrality, unemployment and racial profiling. If the president is smart, he will chew gum.