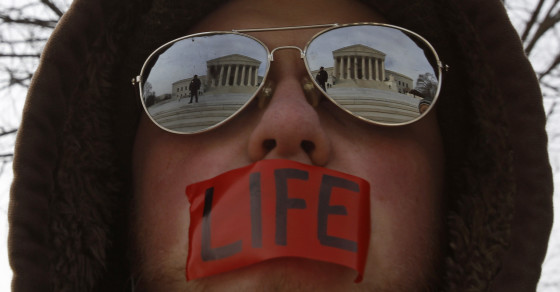 Anti-Exemption Activists: The Radical Side Of The Pro-Life Movement
By Elizabeth Kulze

Anti-Exemption Activists: The Radical Side Of The Pro-Life Movement

With a pro-life majority in Congress and the Pain Capable Child Protection Act, H.R. 36, up for a vote today (which also happens to be the 42nd anniversary of Roe v. Wade), you’d think anti-choice groups would see this as cause for celebration. But as hundreds of thousands of abortion opponents descend on the Capitol for the annual March for Life, some are lambasting the extreme anti-abortion legislation for not being extreme enough.

The bill, which is expected to pass in the House, would ban abortions at or past 20 weeks, but provides exemptions for pregnancies that endanger the life of the mother, as well as those conceived in rape or incest—if the crime was previously reported to police. Such exceptions are generally supported by most pro-life groups championing H.R. 36, and are also part of the Title X Abortion Provider Prohibition Act, H.B. 217, which will deprive Planned Parenthood of federal funding, except in cases covered by the exemptions.

But the American Life League, Save the 1 and other personhood purists feel abortion bans should apply to all unborn babies, regardless of the circumstances surrounding their conception.

“A new Congress has begun, but the new bills introduced have the same old flawed wording that will, if passed, allow some innocent human beings to be killed,” said Jim Sedlak, vice president of the American Life League, to LifeSiteNews. “Both House Bill 36 and House Bill 217 contain language that says they do not apply if the human being awaiting birth was created as the result of an act of rape or incest or if the mother’s life is in physical danger.”

Yes, you read that right. Sedlak and his cohorts believe that rape victims and women, including those who are seriously ill, should be forced to carry their pregnancies to term, even if the consequences are fatal.

This radical view stands in direct contrast to two female Republican policy-makers who recently withdrew their support for H.R. 36 after expressing concerns that the rape exemption was too narrow because it excludes victims who decline to report their incidents to police.

In an effort to catch the attention of congressional champions of the 20-week ban prior to today’s vote, extremist pro-life groups have launched social media campaigns, which urge lawmakers to reconsider allowing any special exemptions. Such a last-minute change is unlikely, but most pro-lifers remain in support of the 20-week ban regardless. The Personhood Alliance and Georgia Right to Life, however, are going so far as to oppose it all together, claiming the bill compromises pro-life principles and demonstrates a “lack of courage” on the part of conservative policy-makers.

And they’d be right about that. It certainly takes a great deal of audacity to deny rape victims and the severely ill their rights to make personal medical decisions.