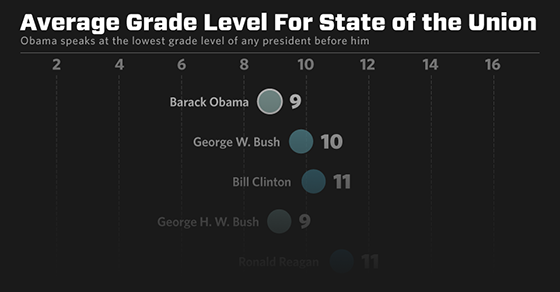 President Obama’s 2015 State of the Union address was written for a 10th-grader, which makes it the most high-minded of all his SOTU speeches, a data analysis by Vocativ reveals.

Generally, in order for Obama to make himself understood to the broadest possible swath of the population, he tailors his speeches to the intellect of a 14-year-old. But over the last few years, the grade level of the president’s speeches has edged up. Vocativ analyzed all of Obama’s SOTU addresses using the Flesch-Kincaid readability test—the most widely recognized reading comprehension algorithm—and gave each speech a numerical grade. Roughly speaking, the spectrum begins at first grade and goes up from there, corresponding to elementary, middle and high school, and then to college and graduate school.

Grade Level of President Obama’s State of the Union Speeches

Vocativ also calculated the average SOTU grade for every president dating back to Woodrow Wilson, when it first became the norm to deliver such speeches before a joint session of Congress. Before Wilson, it was typically presented as a written report. Over the last century, the State of the Union’s sophistication has trended steadily downwards.

Average State of the Union Scores Per President

But there’s more to the story. Using the same method, Vocativ published an interactive graphic in October analyzing over 600 presidential speeches. The same downward trend in sophistication was reflected over time, but according to Jeff Shesol, a former Clinton speechwriter, this is not reflective of a less intelligent society. In fact, the trend indicates progress.

“It’s tempting to read this as a dumbing down of the bully pulpit,” Shesol said. “But it’s actually a sign of democratization. In the early Republic, presidents could assume that they were speaking to audiences made up mostly of men like themselves: educated, civic-minded landowners. These, of course, were the only Americans with the right to vote. But over time, the franchise expanded and presidential appeals had to reach a broader audience.” That, and the advent of mass communication.

Now, when President Obama addresses the country, he is addressing everyone.