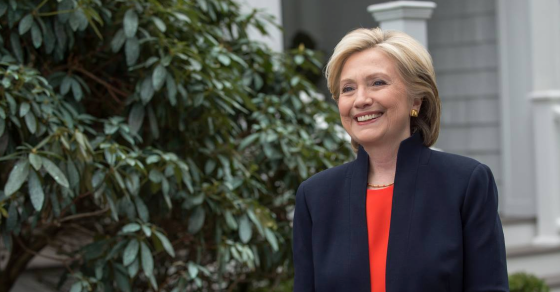 Hillary Clinton’s 2016 presidential campaign was officially announced on Sunday, but a late launch allowed her opponents take advantage of extra time to attack her via social media. Clinton’s much-anticipated social media roll-out started with a video on YouTube and Facebook, and an extremely well-preened Facebook feed detailing her career highlights. A supposed noon launch came and went, leaving cable channels to stake out her Twitter feed, expecting first word to appear there.

Meanwhile, Hillary-haters used the time to sharpen their knives online. Twitter was flooded with anticipatory hashtags, ranging from the spontaneous #WhyImNotVotingForHillary (30,000 tweets or so) to a defensive reversal of the campaign-approved #ReadyforHillary hashtag.

Accusations that the Clinton family are trying to create a new American political dynasty manifested as the hashtag #MyBirthRight, playing on royal family and Game of Thrones tropes to garner  3,000 tweets. The hashtag was promoted by the self-proclaimed Republican street artist Sabo, who was already flysheeting Los Angeles with posters mocking “Queen Hillary” and her upcoming “coronation.” SNL also had their turn on Saturday night, with a parody of how the taping of Clinton’s first video would likely go (see below).

But some of the most focused, evidence-based vitriol via #WhyImNotVotingForHillary was reserved for the Clinton Foundation and the network of influence it has created around Mr and Mrs Clinton. Tweeters pointed out that accepting money from companies controlled by the government of Morocco, and giving access to wealthy, influential donors who hide their wealth offshore makes it hard for Mrs Clinton to argue credibly that she wants to be a champion for everyday Americans.

The dominance of the jibes were short-lived. An hour after Clinton’s campaign started, #Hillary2016 had overtaken #WhyImNotVotingForHillary‘s tweet total. The juggernaut has started.