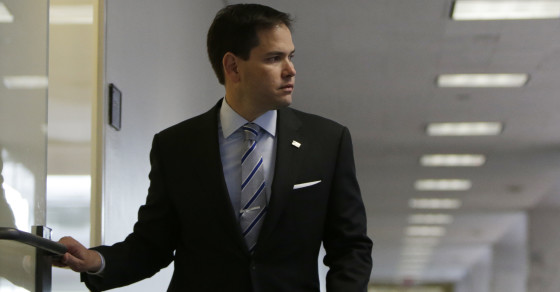 Which Congressman Misses The Most Votes?
By Mike Spies

Which Congressman Misses The Most Votes?

Of the lawmakers currently serving in the U.S. Senate, Marco Rubio (R-Fla.) is the least likely to show up for work. He’s been in office for four years, and of 1,198 opportunities to vote, he has declined to do so 99 times. That’s an absentee rate of 8.2 percent—four times the Senate average of 2.01 percent.

Working with GovTrack.us, Vocativ examined the voting records of every sitting congressman to determine who plays hooky the most. When looking into the Senate, we omitted Mark Kirk, who is technically No. 1, because he missed a year of work in 2012 while recovering from a stroke. We also omitted John McCain, who is technically No. 2, because he ran for president on two separate occasions. In the House, we gave Bobby Rush (D-IL) a pass because he took extended leaves of absence for personal and family health reasons. We considered all other members of both chambers eligible.

For space reasons, “total votes” and “missed votes” were rounded in the chart above. Absentee rates are based on exact vote counts.

In the Senate, Republicans miss votes at a far higher rate than Democrats. In fact, of the top 10 lawmakers on the list, which include familiar names like Lindsey Graham (R-S.C.) and Ted Cruz (R-Texas), nine of them belong to the GOP. According to Betty Koed, a historian at the Senate Historical Office, this is in keeping with a general historical trend. “Those in the minority have less of an interest in getting bills passed,” she says, so they’re less likely to vote.

Democrats spent the last eight years in the majority, though one of them, Brian Schatz, was No. 3 on our list, with an opt-out rate of 6.8 percent. But he’s a senator from Hawaii, a long distance from the nation’s capital.

Of the 13 senators who have never missed a vote, all but two of them only began serving this year. One, however, deserves special recognition: With 5,788 votes and no misses, Susan Collins (R-Maine) has maintained a perfect attendance record ever since taking her seat in 1997, making her the Cal Ripken Jr. of the U.S. Senate. Her only competition, Deb Fischer (R-Neb.), with 712 votes, no misses, began serving in 2013. (She also votes against President Obama’s nominees more than almost anyone else, according to our numbers.)

For space reasons, “total votes” and “missed votes” were rounded in the chart above. Absentee rates are based on exact vote counts.

In the House, the No. 1 absentee was John Conyers (D-Mich.), who has been in office since 1965 and is both the longest and oldest serving member of the lower chamber. Of 27,202 opportunities, he has skipped out on voting about 16.3 percent of the time. That’s a fairly substantial gap compared with the House average 2.8 percent.

As with the Senate, Democrats, who have been in the minority since 2011, miss votes at a substantially higher rate than Republicans. Only two members of the GOP crack the top 10, though Don Young (R-Alaska) is in the upper half, with an abstain-rate of about 14.8 percent. Like Brian Schatz, he too comes from a faraway land—Alaska.

As far as perfect attendance goes, no record in the House compares to Sen. Susan Collins’ 18-year run. But with 2,886 votes and no misses in four years of service, Reps. Justin Amash (R-Mich.) and Steve Womack (R-Ark.) are the standouts.

Now that Republicans control the Senate, trends in the upper chamber seem poised to shift in the other direction.

UPDATE: Senator Rubio’s office has released the following statement to the Miami Herald:

Senator Rubio takes his responsibilities as both a senator and a father seriously. The vast majority of missed votes are when the latter duties take precedent, and he needs to be in Miami for family commitments. He is one of the only senators with young children who has not moved his family to D.C., and tries to spend as much time in Florida with them as possible. In addition to his parental responsibilities, in recent years he’s also had to return to Florida and miss votes due to his mother’s health and civic responsibilities like jury duty. Normally when he misses votes, his vote would not have been decisive, but in those instances he tries to submit statements for the record or write a blog post explaining how he would have voted.

Additionally, we’ve learned that Rep. Jaime Herrera Beutler missed a series of votes in 2013 because of a complicated pregnancy, Rep. Charles Rangel took a three-month leave from the House in 2012 due to a spinal infection and Rep. Tammy Duckworth took maternity leave toward the end of 2014.