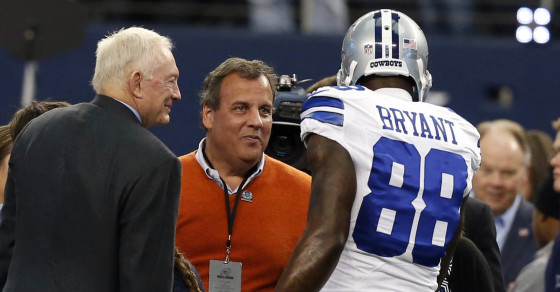 Why It Matters That Chris Christie Is a Dallas Cowboys Fan

As the Dallas Cowboys defeated the Detroit Lions last night in the first round of the NFL playoffs, Chris Christie, the pugnacious governor of New Jersey, could be seen hugging Jerry Jones, the team’s unlovable owner, in his luxury skybox. And as one might expect, the response on social media was not especially kind.

It is unforgivable that Chris Christie is a Cowboys fan.

I irrationally hate Chris Christie for being a Cowboys fan. He's disqualified as a candidate now. It's worse than bridge gate.

Christie’s brother, Todd, came to his defense on Facebook. Apparently, bluster runs in the family: “To all of those non Cowboy fans who have their panties in a ringer because the Governor of NJ is a Cowboys fan—GET A LIFE!!!”

Geez. Imagine what that house was like when both boys were high school.

Like many, I’ve grown weary of social media outrage, and find it rather exhausting. But I do think this situation is exceptional, since being a Cowboys fan, in and of itself, is a brazen character flaw. And if you’re from New Jersey, as I am, well, then it’s downright sinful. The Cowboys are gaudy, like a hideous McMansion that has Doric columns, a disco ball and an Olympic-sized pool with a Playboy bunny stenciled on the floor. They are a crude celebration of wealth and excess. They are “America’s team” in the same way that the Kardashians are America’s family.

Most of all, though, the Cowboys, in all their glitz, represent the opposite of bare-knuckle, no-frills authenticity—a quality highly valued by New Jersey football fans, who put a lot of stock in grit and a hard-hitting defense. Christie sells himself as an authentic politician (as if such a thing could exist), and between shouting down hecklers, he often cites his love for Bruce Springsteen. At the 2012 Republican National Convention, he cast himself as a Springsteen character, and told the audience he was raised by a woman who was “tough as nails and didn’t suffer fools at all.”

That may be true, but hugging Jerry Jones, the Donald Trump of the NFL, is a betrayal of his brand, and only reminds us of the guy Christie really is: the governor who kills working-class jobs and then charters a helicopter to his son’s high school baseball game, using taxpayer money. You can’t get much farther away from Springsteen than that, unless you fly to Dallas and cheer on the Giants’ archrival.

Playing a little defense of his own, Christie’s brother says the governor has been a Cowboys fan all his life, which is the ultimate metaphor. Fans of the Giants and Jets endure quite a bit of losing, heartbreak and frustration. The teams constantly fall short of your expectations and are sometimes aggressively banal. But that’s New Jersey, and growing up there we used to mock Cowboys fans—the ones in our town—as front-runners. It was the ultimate insult. It meant you were abandoning your people.