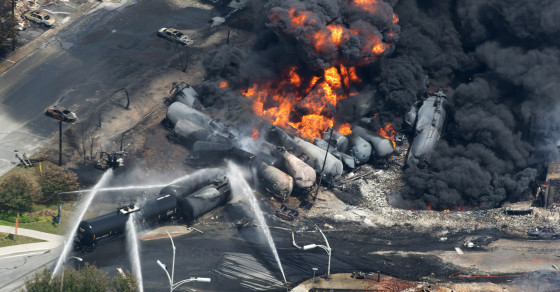 Two major train derailments, one in West Virginia and one in Northern Ontario, have once again put oil transport by rail in the national spotlight in the United States.

The derailment of the train hauling crude oil in West Virginia resulted in at least 14 cars bursting into flames. As a result, two towns near the site of the accident, Adena Village and Boomer Bottom, have been evacuated. Oil from the train also spilled into the Kanawha River, contaminating the drinking water for two counties. West Virginia Governor Earl Ray Tomblin has declared a state of emergency. The incident came two days after another oil train derailment in Ontario, in which 29 cars were derailed and seven caught fire.

A lot of focus is on the cars that carry oil and the standards that govern their construction, so that when they fall off the tracks, they don’t catch fire or spill. But few people focus on the tracks. Train derailments are by and large the most common type of train accident in the U.S. According to data from the Federal Railroad Administration, between 2001 and 2010, of the 58,299 train accidents that occurred, 54,889 were train derailments. That’s a whopping 94 percent.

So if America wants to stop rail cars carrying crude oil rolling off the tracks and causing fires, evacuations and environmental chaos, putting money into rails, sleepers and their associated maintenance makes sense. And America really should want to do that, because rail transport of crude oil is increasing at a phenomenal rate. Since 2010, the amount of oil traveling around the county’s railroads has increased almost tenfold.