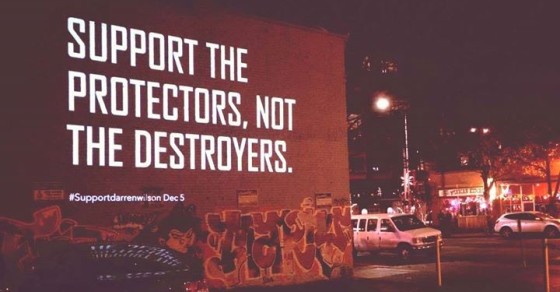 Deehubs is a billboard-like advertising service that broadcasts user-submitted messages on public spaces using light projectors. For the most part, these messages — and the photos of them on Deehub’s website and Facebook page — are positive, upbeat and encouraging.

But then 4chan happened.

On Friday, Seattle displays of company’s service were filled with submissions apparently supplied by members of 4chan’s notoriously vulgar and politically incorrect politics board, /pol/. It wasn’t a good look.

One message alluded to the shooting of African-American Michael Brown by white police officer Darren Wilson in Ferguson and the protests that occurred after with the line, “Good bless officer Wilson #dindonuffin.” Other gems included Nazi slogans, the discrediting of the holocaust and its survivors, anti-African-American tropes, and, of course, conspiracy theories and anti-government comments.

In short, unless you have your content filters on, 4chan ruins everything.

(typo in the German) Translation: We must exterminate the Jews

The rest can be found here.