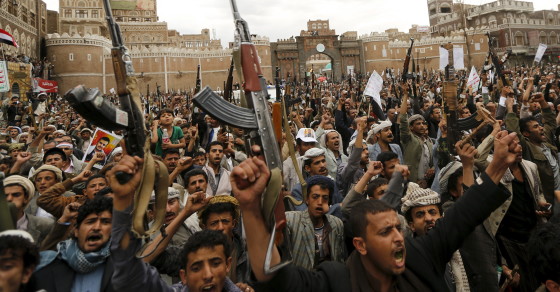 Yemen Divided, Citizens Demonstrate For Both Sides
By Saar Fresco

Images coming out of ongoing demonstrations in Yemen show people in areas hit during the ongoing Saudi-led bombing campaign there are divided in their feelings on the strikes.

People from the cities of Taiz and Sana’a have been out in the street showing either their support or opposition to the Saudi airstrikes. The strikes began earlier this week as part of the fight between Houthi rebels, who are backed by Iran and by deposed Yemeni leader Ali Abdullah Saleh, and the government forces loyal to President Abed Rabbo Mansour Hadi, who has appealed to his Arab allies for help even as he fled the country.

The images of protesters in both cases were highly politicized. Houthi rebels now control the state’s official television channel, and broadcasts in Sana’a, the country’s largest city, showed only opposition to the Saudi strikes and support of the rebel movement. By contrast, much of the reporting about demonstrations in favor of the airstrikes came from Saudi media, and those demonstrations were celebrated by Saudi people on social media as well.

Use of social media in Yemen is relatively light, but two of the most prominent Facebook pages in the country represent the city of Taiz, and they show the split in allegiances. “Taiz City” and “We Are All Taiz,” both of which have tens of thousands of followers, have come out on opposite sides of the conflict.

Shi'ite Muslim rebels hold up their weapons during a rally against air strikes in Sanaa March 26, 2015