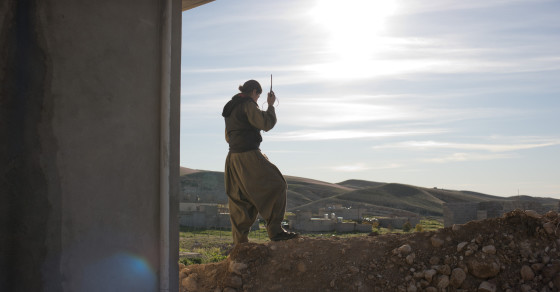 The Women Rescuing Families From ISIS
By Benedetta Argentieri

The Women Rescuing Families From ISIS 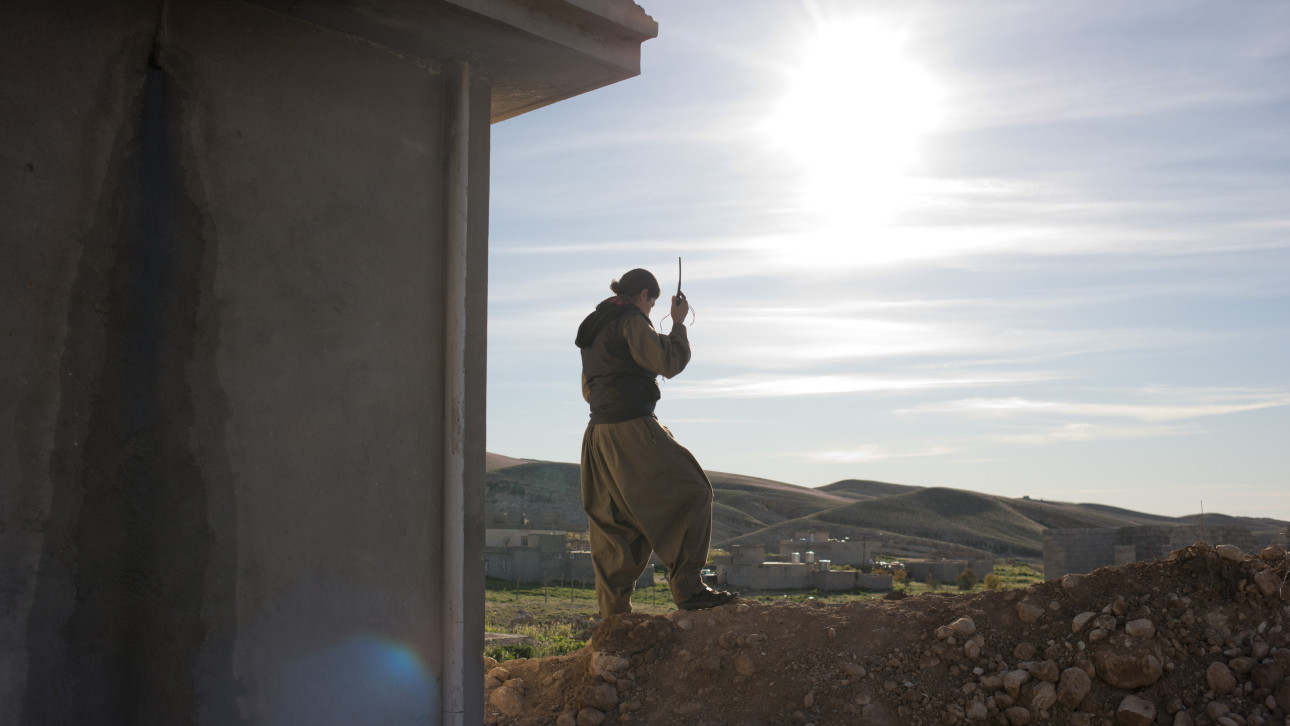 ERBIL, IRAQ – It was shortly after 5 o’clock on a cold January afternoon when the Kurdish brigade commander went over the details of the unit’s next mission. Their assignment: enter two separate buidlings under fire to rescue families hiding inside. The soldiers sat on the floor in a circle inside their compound, on the outskirts of Mount Sinjar in northern Iraq, and waited for the signal to proceed.

The commander, who goes by the nom de guerre Beritan, is a woman, as are her six soldiers. For months she and her team have fought their way into Sinjar City, battling ISIS and working to free Yazidi women and children held prisoner there. Since ISIS took control of the area last August, their fighters have been moving captives further and further away from the front line, making Beritan’s task more difficult and more dangerous.

“We got information about these two families with several children,” she told this reporter. “We had to move fast. One baby was born just two days before. We knew they needed urgent medical care.”

The female team coordinated with other Kurdish fighters, including the Peshmerga, who launched an offensive to distract the ISIS fighters and allow Beritan and her squad to infiltrate the front line without drawing a lot of attention. As the battle raged across the city, her group crossed over, armed only with Kalashnikov rifles and hand grenades. When they finally reached the first building they found a man with two children, a boy and a baby girl, with burns all over their bodies. Their mother lay dead nearby, shot a few hours before, she said.

They were too late getting to the second building.

“When we reached the other family we found them dead. Daesh (the Arabic acronym for ISIS) had executed them, knowing we were coming to get them,” Beritan said. “At least we rescued the others.”

Beritan, second in command, listens during an interview at her post near Sinjar Mountain, March 6, 2015.

Beritan called that a good day. “When we can save lives, especially of women and children, it is always a good day,” she said. “Though the real good day is going to be when all Yazidi are going to be free and will be able to come back to the city to live in peace.”

Beritan, whose real name is Pareen Sevgeen, is 30 years old. She’s tall with curly dark hair and hazelnut eyes. She’s in charge of about 70 female fighters in the area. Her stern gaze softens when she jokes with her fellow soldiers.

“All these women are more than family, they are more than sisters. I trust them with my life. We do everything together; we sleep, we eat and we fight,” she said. “We want women to be free, we want our people to have rights anywhere they live,” she said, indicating the female fighters sitting in the room.

In the evenings they sing and dance. They chat for hours and comb each other’s hair into long, articulated braids. They’re not interested in fitting in with the boys, rather, they emphasize good grooming. To them, maintaining their femininity matters just as much as their combat skills. They show affection by hugging or pinching each other. Beritan and her superior Berfin are the only ones to have ranks.

They live separately from their male counterparts, though “we love them like brothers,” they say. Relationships are forbidden. Most are between 18 and 25 years old, some joined the unit when the Syrian civil war broke out in 2010, others when ISIS began to spread in Iraq and Syria. They mainly come from Turkey and Syria, though none really wants to talk about her previous life. In a way, it’s too painful. “That is the past, YJA (their unit) is our present and our future,” said Lilav, a 22-year-old redhead who is always at Beritan’s side.

The commander agreed to this interview, because “a long time had passed,” and she believes her family, still in Turkey, is not in danger with the government. Beritan, a Kurd, was born in Diyarbakir, Turkey, where she says she lived as “a second class citizen.” When she was at school, “I used to study very hard. I never got the highest grade, although I didn’t make mistakes,” she said. “I wanted to be elected to the student council but I couldn’t. Again, because of my origin. If we speak our language we get arrested, we are prohibited to live our culture, we don’t have basic rights and for women it’s even worse.”

At 18 she enrolled in medical school and studied nursing, but two years in she dropped out, choosing to join the YJA Star, a guerilla group, to “fight for Kurdish people’s rights, for our freedom.” She left home one day without bidding her family farewell. “I knew they were going to try and stop me and I couldn’t let them,” she said.

Female members members of the YJA Star, the military faction of the PKK, rest in the evening at their Sinjar base, March 6, 2015.

The all-female brigade is linked to the PKK, the Kurdish Workers Party, a political organization founded in Turkey in 1978 and listed as a terrorist group by the U.S. and NATO. In 1983 the PKK launched an armed struggle against Ankara for Kurdish self-determination. Under a ceasefire agreement in 2013 the PKK retreated to parts of Syria and the semi-autonomous Kurdish region in northern Iraq.

Beritan’s brigade, along with other members of the PKK, were called to Sinjar to help the Yazidis, a religious minority, who came under attack by ISIS fighters in August last year. In an orchestrated campaign that killed thousands of people, ISIS seized the villages surrounding Mount Sinjar and kidnapped girls into sexual slavery. The PKK helped thousands of Yazidis escape encirclement at the foot of the mountain, which the Yazidis consider to be holy.

Her battalion joined forces with other Kurdish units to open a humanitarian corridor between Sinjar and the Syrian city of Derick, traversing a nearly 90 mile stretch through dangerous and disputed terrain.

“Most of the people made it up to the mountain. But some were left behind, so we went to rescue them and since we didn’t have any cars or vehicles we carried them on our backs up the mountain,” she said. “At the end we were able to save thousands of people.”

Sinjar has become increasingly important in the war against ISIS. If the Peshmerga and Kurdish militias can secure Sinjar and nearby villages south of the mountain, Mosul will be cut off from Raqqa. the de factor capital of the Islamic State in Syria, and cutting ISIS supply lines as well.

“Sinjar is very important for Daesh strategy and they are doing anything to keep the city,” said General Hashem Sitay, the Peshmerga 8th Brigade Commander, sitting behind a desk in a makeshift headquarters that was once the home of a Yazidi family. His office has a bed with bright pink linen and 12 brightly colored plastic chairs, as well as a stack of sandbags piled up high enough to cover the glassless window. In front of him was a small flat screen television, permanently switched on to Rudaw, the Kurdish news channel. On the wall, a 2014 calendar had every day checked until July 29 – shortly before ISIS attacked the area.

“No more than 100 jihadis are in the city right now. The fight is complicated because it is from building to building where they can hide, they dig passages to protect themselves and move around. It is a difficult scenario, but it is not impossible,” Sitay said. But even if he and his troops take the city, keeping it will not be easy. “We wll need at least 10,000 men to keep it safe for the people to come back,” he said.

The Peshmerga continue fighting IS for control of Sinjar in the town of Shangal, Iraq.

The Kurds fight ISIS militants practically every day for control of the only road that passes through Sinjar City from the mountain. The ISIS fighters always use the same tactic, say Peshmerga officers. As soon as the sun sets, suicide bombers approach the frontline on the outskirts of the city, sometimes driving Humvees, and blow themselves up. In their wake are bands of fighters taking advantage of the explosion to try to push Kurdish forces back to the mountain.

“ISIS is the worst enemy the Kurds have ever had,” Beritan said. She believes the group uses religion to legitimize its war and tricks people into joining them. “Jihads say they are protecting Islam and Muslims, but their actions say the opposite. For instance, Muslims say nobody can touch a dead body, and you should never play with it. But Daesh do that all the time,” she said.

Unlike the Peshmerga, which rotates units in and out of the frontline almost every two months, Beritan and her team have not left the area, and do not intend to. “We came here to help the people of Sinjar,” she said. “We will fight for them until the end.”