Exclusive: A Secret Mission, a One-Eyed Pilot, a Fiery Crash in Colombia
By Aram Roston

Exclusive: A Secret Mission, a One-Eyed Pilot, a Fiery Crash in Colombia 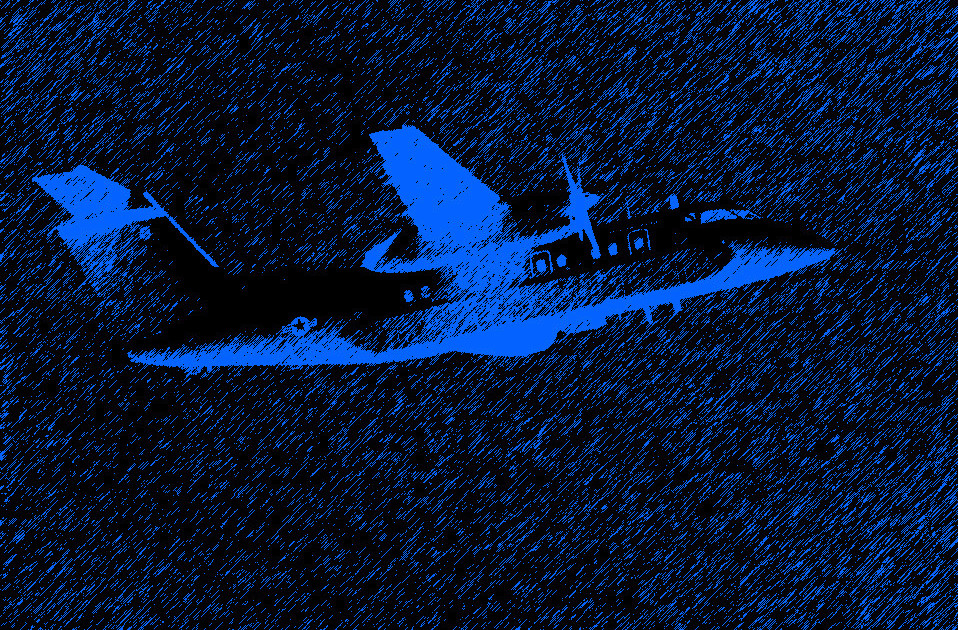 The last time Patricia Carter saw her nephew—William Burnette III—was this spring at her home in suburban Maryland. The 28-year-old had recently left the Air Force, and was working as a defense contractor in Central America. The two of them were close, but there were certain things that B.J., as she called him, wouldn’t tell her about his job. All she knew was that his mission was top secret. “If I tell you, Aunt Patsy,” he joked, “I’m going to have to kill you.”

Six months later, Burnette died when an American spy plane crashed on a remote mountain in northern Colombia. He was one of two American civilians to perish in the accident, which also claimed the lives of a U.S. Air Force sergeant and a Panamanian police officer.

The circumstances of the crash were mysterious. But it’s now known that Burnette and his cohorts were part of an intelligence operation called “Prospector,” a privatized U.S. counter-drug mission based in Panama. To run the operation, a shadowy Air Force intelligence unit, known as Big Safari, had hired Sierra Nevada Corporation, a well-connected defense firm.

While the fatal crash has received virtually no public scrutiny, a Vocativ investigation raises serious questions about how the U.S. oversees its privatized intelligence operations. Among the issues: The plane’s head pilot was allegedly blind in one eye, though he had special permission to fly. On top of that, the aircraft had been so thoroughly refitted that federal regulators considered it an experimental plane, and its use on the mission potentially violated aviation safety rules. Worse still, sources say, critical navigation equipment, intended to warn the crew if the plane was getting too close to the ground, had been turned off because of technical problems.

Through a spokesperson, Sierra Nevada Corporation said it wouldn’t comment on government contract work. The Air Force and U.S. Southern Command declined to comment as well, citing an ongoing investigation into the crash.

Burnette’s co-worker, Ralph Dietz, 66, spent 20 years in the Air Force before retiring to work at the Department of Homeland Security, according to his daughter, Jennifer Moore. He left the agency in March, she says, and was excited that he could do similar work in the private sector. But why was he signing on now, she asked? Why not relax a little, enjoy retirement? He loved the adventure, she says. “This is the fun stuff!” he told her. But like Burnette’s aunt, Moore knew few details about what Dietz was doing in Panama.

In reality, Burnette and Dietz were hired by a little known defense contractor called New Frontier Innovations. As it did for other operations, New Frontier was providing the pilots and crews for Sierra Nevada’s “Prospector” mission.

The operation was designed to use civilian planes to track “go fasts”—open-hulled speedboats, loaded with extra fuel and tons of cocaine—for the U.S. military. A cross between cigarette boats and freighters, some of these boats are 50 feet long and rigged with four high-horsepower engines. They peel out of inlets in Colombia and slap the Caribbean Sea for hours until they arrive at makeshift ports along the Mosquito Coast in Honduras or Panama. For Colombia’s cocaine cowboys, that’s the trafficking method du jour.

Big Safari—a unit that helped perfect killer drones—was tasked in 2011 with finding a company to fly these surveillance missions. Using a loophole in U.S. contracting law to avoid competitive bidding, Big Safari steered the “Prospector” mission to Sierra Nevada, a company with close links to the intelligence agency. Last year, the defense firm bought the Bombardier Dash 8 plane, which would later crash in Colombia. It quickly began mounting spy equipment to the back of the aircraft: a high-tech radar, a camera that can see for miles, even at night, and listening devices that can overhear drug traffickers on their cell phones and radios. Sierra Nevada also installed two big fuel tanks, so the planes could fly hours longer than usual—allowing Dietz and Burnette to monitor the boats without having to land and refuel.

By early 2013, “Prospector” was ramping up. But because of the plane’s modifications, it no longer met Federal Aviation Administration (FAA) certification standards. So in May of 2013, the FAA labeled the plane an “experimental” aircraft. No one was allowed to operate it except for “crew training and market surveys,” according to its airworthiness certificate.

Chasing down drug smugglers for the U.S. military, aviation experts say, hardly qualifies as either crew training or market surveys. I read the paperwork to aviation attorney Justin Green to try and understand the legalese. “If they were doing drug interdiction on a certificate that didn’t allow it, they were doing something breaching the certification,” he says. “They violated the regulations,” which is a legal gray area.

Earlier this year, the newly certified plane, along with its pilots and crew, deployed to Panama City, which became the launch pad of the operation, as well as Dietz’s and Burnette’s new home.

From the beginning, insiders say, the mission was plagued with problems. Calling home to his family, Burnette complained that the operation seemed amateurish, even risky. “The plane kept breaking down,” his father, William Burnette Jr., recalls him saying.

The younger Burnette also complained about the pilots. “He was saying, ‘The pilots don’t even know how to land the plane,’” his father says, as sometimes they allegedly came down too hard or missed their initial approach.

Another problem: Sources say the plane’s ground proximity warning system—a critical piece of safety equipment—wasn’t working properly. When an aircraft is too close to the ground, the system is supposed to verbally warn the pilot: “Terrain! Terrain! Pull up!” But because of technical issues, someone had turned off the equipment, according to insiders.

On Oct. 4, at an airfield in Panama City, Burnette and Dietz prepared for yet another mission. There were two pilots manning the plane, but the one in charge, according to friends and associates, couldn’t see out of his right eye—an unusual characteristic in a profession in which vision and depth perception are key to success and safety. Friends of the pilot say he’s a former Navy Seal. They say he lost vision in the eye after it popped out of its socket while he participated in a martial arts tournament about a decade ago. On the way to the hospital, sources say he had to cup the eye in his hand before doctors put it back in. His vision in the eye has allegedly never recovered, and some former colleagues are critical of his flying abilities. But the pilot continued to fly after receiving a special waiver from the FAA.

The Bombardier Dash 8 (not shown) that crashed in Colombia was labeled an "experimental" aircraft by the FAA because it had several modifications. (Flickr/Christopher Ebdon)

The Air Force is still investigating the cause of the crash, but sources say that on that fateful night in Colombia, a pilot who allegedly had vision in just one eye was in command of an aircraft only approved for experimental flights and the plane’s ground warning system had been deliberately unplugged.

That night, as they prepared for takeoff, Burnette and Dietz sat down in the back of the aircraft in front of their computer screens. Each monitor was connected to the plane’s high-tech cameras, as the two men scanned the ground for drug boats. Both were likely tired. They had been complaining to their families about the pace of the job. Dietz in particular was excited to leave the grueling hours behind. His ex-wife says he wanted to move back in with her so he could spend more time with their 14-year-old daughter.

As they took off in the dark (they flew at night because that’s when the drug smugglers often worked), the inside of the plane would have been pitch black, save for the lights on the computer screens shining on their faces. Joining the crew was Lt. Lloyd Nunez, a Panamanian Guardsman, who served as a “host nation rider.” (Most countries don’t like American civilian spy planes flying unattended through their airspace, so they insist on someone like Nunez riding along.) His escort for the evening was U.S. Air Force Sgt. Martin Gonzales, who also served as his translator.

It was a typical mission, except for one thing: Hours into the ride, the pilots lost their way, according to insiders. They didn’t realize they were over land until it was too late. The results were catastrophic. As the plane hit the mountain it bounced off the treetops, its fuel tanks burning fiercely in the night, until the splintered aircraft came to a halt.

Somehow, both pilots survived. Sources say they tried to open the emergency hatch, but it had been taped shut from the outside. Looking for another way out, they found a rupture in the cockpit floor and crawled through it, then made their way out into the jungle, where they waited to be rescued. The co-pilot was severely burned while the chief pilot, the one whose vision was allegedly impaired, suffered only minor injuries. (Because of the sensitivities of the story, and because efforts to reach them were unsuccessful, I’ve chosen not to name the pilots.)

The families of Burnette and Dietz are just now learning the truth about the fatal mission. “They haven’t told me nothing!” Burnette’s father says. I explained what I’d heard about the pilot’s vision, the experimental aircraft and the ground terrain warning system. “Oh, fuck,” he says. “That was my only child.”

The head pilot came to the memorials for both men and paid his respects. Moore, Dietz’s daughter, gave him a hug. She’s glad he survived, but she has hired a lawyer and is trying to learn more details about the accident. “It makes me mad,” she says, talking earlier this month about the crash. “I keep thinking it could have been prevented.”

(An earlier version of this story referred incorrectly to the Federal Aviation Administration.)