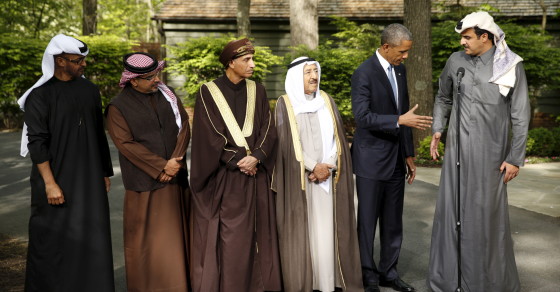 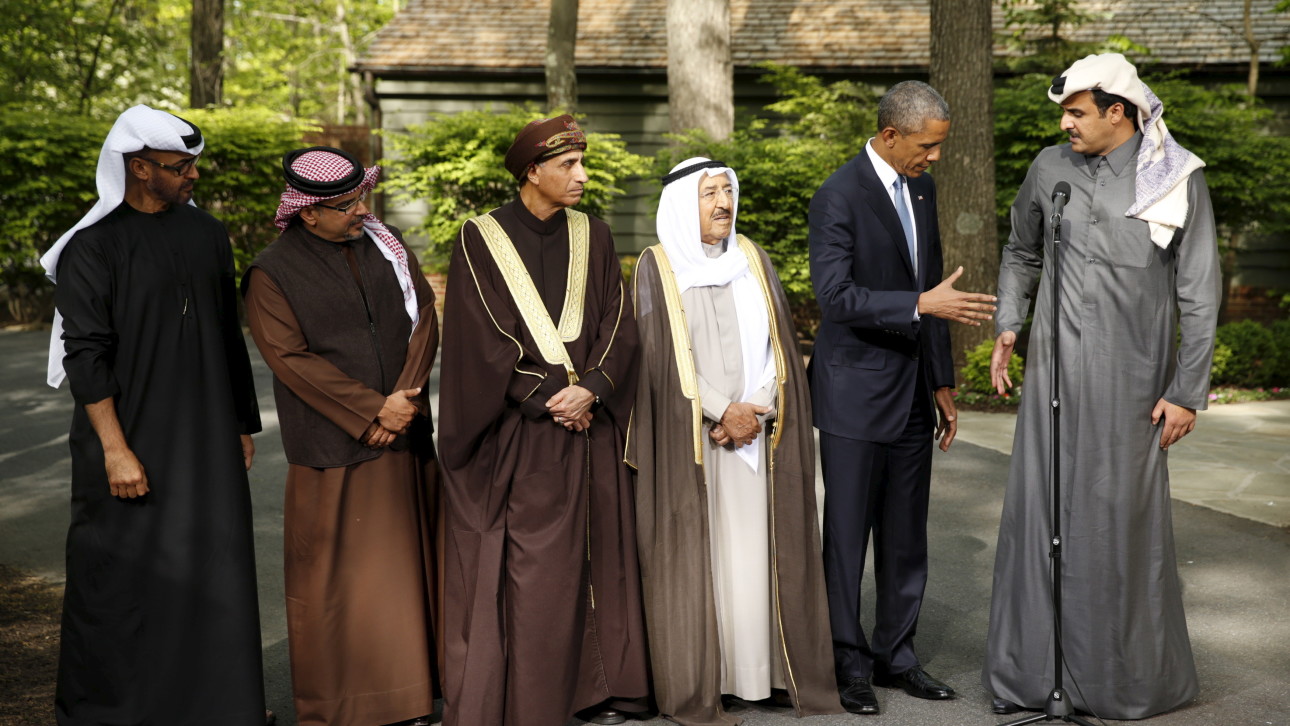 Obama hosting the six-nation Gulf Cooperation Council at Camp David. — REUTERS
By Shane Dixon Kavanaugh
May 18, 2015 at 6:14 AM ET

President Obama’s “ironclad commitment” to Persian Gulf allies may fail to calm Arab concerns about the resolutions to the increased instability in the Middle East, national security experts say. But it will certainly be a boon to the U.S economy, pumping billions of dollars into its defense industry.

Saudi Arabia and other members of the Gulf Cooperation Council left Camp David last week with little in the way of bold, hardline pledges from the United States on Iran, Syria or ISIS. Instead, they were offered to continue buying billions of dollars in advanced weapons, which the Obama administration has aggressively sold to them, time and time again, over the last six years. Continuing escalated arming of one side in the ongoing regional proxy war between Saudi Arabia and Iran will also likely only heighten tensions between those two powers.

“I think the Gulf states came in with fairly low expectations and that’s precisely what they left with,” says Ken Pollack, a senior fellow with the Brookings Institute in Washington, D.C. He added: “We need to recognize that these arms agreements, though framed as some great favor, probably help America more than these Arab countries.”

The sale of fighter aircraft, missile defense systems and other U.S. military technology has become a pillar of American diplomacy in the Middle East during the Obama administration. Arms deals to GCC states surged to $68 billion during the president’s first five years in office, more than triple the $22 billion in defense sales brokered with these countries during the entire Bush administration, according to figures compiled by the Defense Security Cooperation Agency. In 2012 alone, arms agreements between the United States and Saudi Arabia topped $35 billion and included everything from Gatling guns to Apache helicopters.

The new offers that emerged at Camp David—which include missile defense, maritime and anti-cybercrime technology—continued Obama’s tack toward arms deal diplomacy, says William Hartung, a director at the Center For International Policy. They also dovetail nicely with the president’s political and economic goals.

By outfitting Saudi Arabia and other Arab states with additional high-end military equipment, Obama can avoid committing American troops to future conflicts in the region, which remains widely unpopular following the wars in Iraq and Afghanistan. The president also delivers a huge boost to the bottom lines of defense giants like Boeing and Lockheed Martin, which have been clamoring to capitalize on the ongoing volatility in the Middle East.

“To me, the terms of the arms piece at the summit seemed more like a business proposition than anything else,” Hartung says.

That business proposition, however, is not without risk. The Saudis have become more hawkish in the region and are now vowing to match Iran’s nuclear enrichment program, raising fears of a possible arms race. Flooding the Persian Gulf with additional military technology could further destabilize a region marred by multiple wars, sectarian violence and human rights abuses.

“Once you give these regimes the weapons, you can’t exactly tell them what to do,” says Hartung. Fighter jets, ballistic missiles and even cluster bombs supplied by the United States have been liberally used by Saudi Arabia in the punishing airstrikes it is conducting with an Arab coalition against Yemen. The United Nations estimates that more than 1,000 Yemenis have died since the conflict began in March and at least 300,000 people have been displaced.

Speaking to reporters on Thursday, Benjamin Rhodes, a deputy national security advisor, downplayed concerns about a potential arms race in the Middle East, saying that the Iran deal should make Gulf allies “more confident that Iran is further away from a nuclear weapon and that there are inspections that can verify that.” Rhodes also said that the arms agreements reached at Camp David would be instrumental in keeping Iran and terrorist groups, such as the ISIS, in check.

“These are the types of capabilities that I think are directly relevant to the threats across the region to include not just destabilizing activities from Iran but also terrorist groups like ISIL,” Rhodes said, using another name for ISIS, which is also called the Islamic State.

With several multi-billion dollar deals on the horizon, the United States plans to expedite arms sales with its Arab allies. Reuters reported that Boeing is finalizing a deal to sell Kuwait 40 F-18 fighter jets for $3 billion. Qatar, meanwhile, could soon close on a $6.5 billion missile defense system furnished by Lockheed Martin, a defense company that may also make billions upgrading Saudi Arabia’s naval fleet starting as early as this summer.

Some national security experts, like Pollock, remain skeptical as to whether weapons alone will secure the region.

“I know it sounds crazy, but the Middle East becoming a helluva lot less stable under Obama,” he says. “This summit was another missed opportunity.”