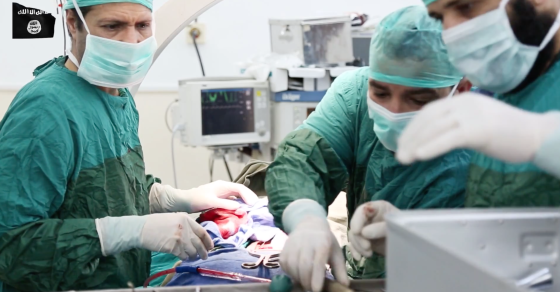 ISIS Health Care Video An Ad For A Welfare State

In its latest propaganda video, ISIS promotes a health care system and services it is operating out of the Syrian city of Raqqa, and includes interviews with an Australian man who runs the pediatric ward.

Styled along the same lines as a healthcare service promotional video, the broadcast is the latest salvo from the group which has aimed much of its propaganda on luring recruits and potential residents to its self-declared Islamic state. Vocativ recently analyzed the ISIS propaganda machine and found an almost equal number of positive propaganda pieces relating to nation-building and social services, as negative items including beheadings and executions.

While said to be reported out of the Health Department in Raqqa, the video shows an ambulance belonging to “Iraqi Civil Aviation” speeding up to a hospital and a man on a stretcher being rushed inside. All the interviews are conducted with men purporting to be doctors, but no real names are given. One man, Abu Mukatil al Hindi, says there are doctors from Russia, Tunisia, Sri Lanka and Australia, and that women are treated by female physicians.

An Australian man, who gives his name as Abu Yusuf al-Australi, says he was happy he’d come here and sad he hadn’t made that decision to come and work in the Islamic State sooner and asked for other Muslims living in the West to come and join him.

“It’s a good system that they’re running here, everything lived up to my expectations completely,” he told the cameras. “We really need your help, any little thing gives the local people who are truly suffering a lot of benefit.” He said they didn’t lack equipment, only the staff. “Please consider coming, please don’t delay,” he said. “Inshallah see you soon.”