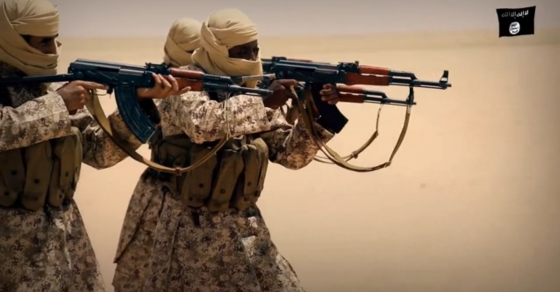 Supporters of the Islamic State say they’ve declared a caliphate in the deserts of Yemen, where government forces are battling Shiite Houthi rebels, and Al Qaeda fighters are gaining ground amid the chaos.

In a nine minute video published online, the group calls itself Soldiers of the Caliphate in Yemen. They appear, all masked, in a desert landscape and number a dozen or so, bearing automatic rifles. They go through shooting exercises, and crawl through the sand on their elbows while carrying their weapons. In the end they face the camera and the man at the forefront sends his greetings to Abu Bakr al-Baghdadi, the self-declared caliph of the Islamic State. The fighter and several others direct their threats to the Houthi rebels, who are reported to be backed by Iran, and have been fighting the Yemen government for years for greater political representation.

After the Houthis took over the capital Sana’a in January, the conflict between the rebels and government forces escalated. The U.S. Embassy, which had previously maintained staff there to coordinate intelligence efforts targeting Al Qaeda in the Arabian Peninsula (AQAP), was evacuated, and the sitting president, Abed Rabbo Mansour al-Hadi, fled the country to neighboring Saudi Arabia. Since then a Saudi-led coalition has inflicted punishing airstrikes on targets in both Sana’a and the port city of Aden to counter the rebels’ advance. Meanwhile, AQAP fighters had advanced on other port cities and territory. The Houthis have said they are now the only ones still fighting al-Qaeda as the crisis continues.