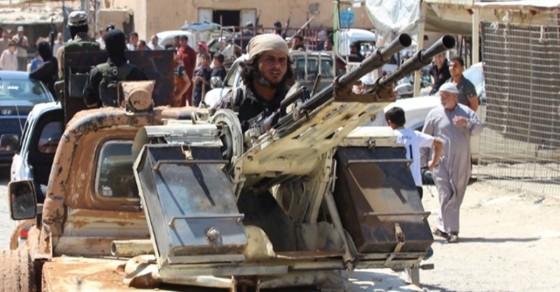 ISIS Celebrates Its Victories In Anbar
By Gilad Shiloach

ISIS Celebrates Its Victories In Anbar

Fighters loyal to the Islamic State have overrun several villages on the outskirts of Ramadi, the capital of Anbar province in Iraq’s west, and online Thursday, the group is celebrating.

The network’s local media outlet released images of a military parade in Kabisa, a town in the nearby ISIS-controlled part of Anbar, where militants marked “the divine victories in Ramadi.” Hundreds of families fled the villages of Albu Ghanim, after ISIS blew up the local police station and seized three villages along the way to Ramadi, Reuters reported.

After recently losing the northern city of Tikrit to government forces, ISIS has been keen to show military gains, and on Thursday its fighters were tweeting, reportedly from inside Ramadi, that the city’s residents welcomed them with food and drink.

Meanwhile, a Twitter account related to at least one Shiite militia is threatening to regroup and take Ramadi from ISIS, as they did with Tikrit.

Translation: Joy fills the people in 100 Street #Ramadi They shake hands and embrace their sons of the #Islamic State and give them food and drink.

Translation: “We promised to take Tikrit, and today we promise to take Al-Anbar.”