The Colonel and His Labyrinth
By Aram Roston

The Colonel and His Labyrinth 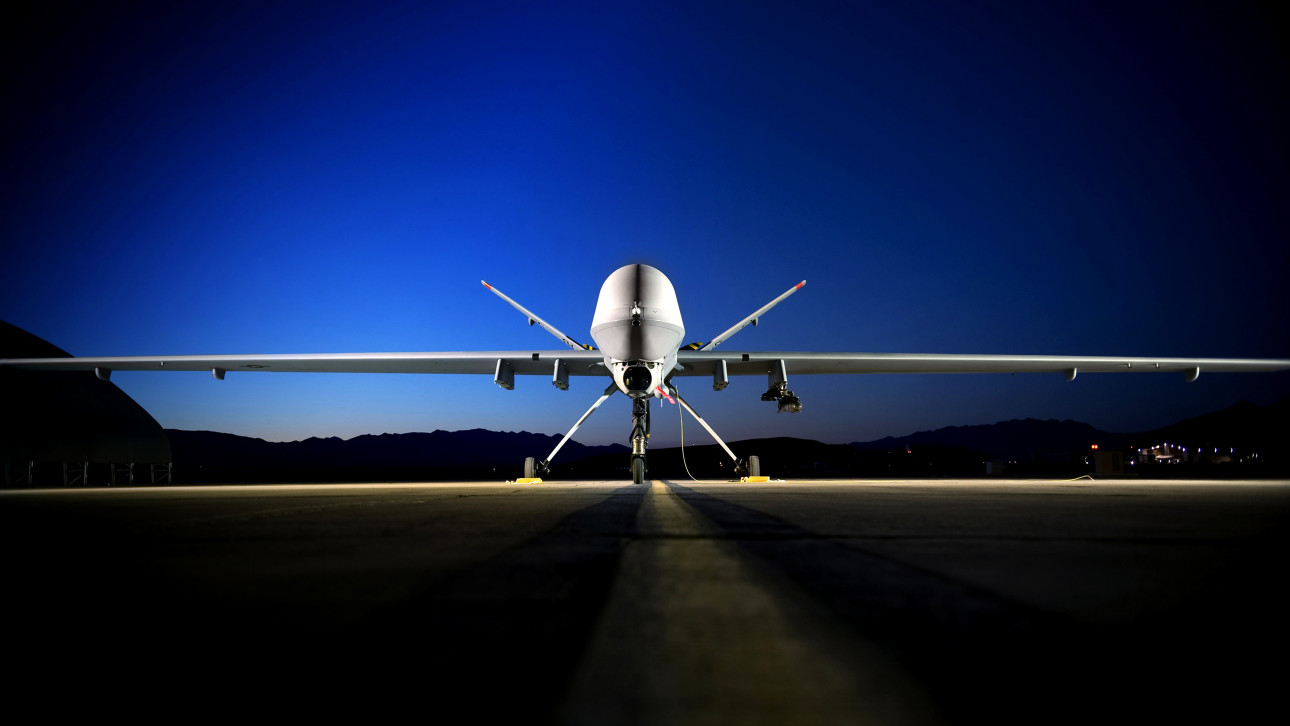 The man on the other line didn’t seem happy. “We are a secretive and shadowy organization that has been in existence for over 60 years,” he said.

The man’s name is Col. Edward Topps. He’s the leader of a mysterious Air Force agency known as “Big Safari.” Last month, he called me out of the blue, after I’d written a story about a top-secret spy plane mission. Topps’ unit had paid Sierra Nevada Corporation—a major private defense firm—tens of millions of dollars to gather intel on Mexico’s most notorious drug cartels.

There had been no bidding process for the contract, which is a red flag, given the Pentagon’s history of how it spends taxpayer money. So I decided to take a closer look.

“They are huge,” a source tells me about Topps’ agency. “It’s the good old boy Air Force thing. They’ve got so many ‘black’ projects it’s not even funny.”

Known for its spy work, Big Safari is the agency that helped the United States perfect its killer drones. It works with a number of major defense firms, and some 10 percent of its business has gone to Sierra Nevada. Over the past seven years, Topps’ unit has steered $3.5 billion worth of contracts to the Reno-based company without allowing others to compete for the deals, according to a federal contracting database. As one source puts it, Big Safari and Sierra Nevada “are so close they share rubbers.”

To find out more about their relationship, I filed a Freedom of Information Act request. Topps had seen the FOIA and read my story. He tried to reach out to me on Twitter, and later called me on my cell. I called him back later that day. “We work some of the departments’ most sensitive projects,” he told me, “and they are all along the lines of intelligence, surveillance and reconnaissance operations.”

I knew much of this from hearsay, but was surprised he was being so blunt. I stopped him before he continued. There was no point, I thought, in the colonel getting in trouble.

“You don’t want me to quote everything you are saying, I assume?”

He brushed me off. “I don’t have a problem,” he said, and kept talking.

Sierra Nevada is owned by Fatih Ozmen and his wife, Eren. They were born in Turkey and have been praised for their self-made success. Fatih Ozmen, I’ve heard, is a generous man. Once, in a celebratory mood, he apparently bought the entire house drinks at Siné, a popular bar in Pentagon City.

The Ozmens have friends in high places. One of the largest recipients of their largess is Harry Reid, the Nevada Democrat and Senate majority leader. On Eren Ozmen’s Facebook page, there’s also a photo of her with an arm around Barbara Mikulski, the Maryland Democrat and member of the powerful Senate Intelligence committee. And like many of its competitors, Sierra Nevada hires plenty of former high-ranking military officials, including some who have previously worked for the Air Force.

About 10 years ago, the Ozmens had a brush with scandal after Sierra Nevada hired the wife of Republican congressman Jim Gibbons as a consultant. Gibbons eventually went on to become the governor of Nevada. But while on Capitol Hill, he reportedly pushed to award Sierra Nevada contracts without disclosing his wife's connection to the firm.

Over the past seven years, the company’s business with the federal government has grown rapidly—from $100 million in 2005 to $1 billion in 2012, according to a federal contracting database. That’s a 1,000 percent increase, which coincided with Sierra Nevada’s growing lobbying efforts. Since 1997, the couple has donated about $424,000 to both parties in Washington, and they’ve steadily upped their annual donations, according to Federal Election Commission records. The company’s political action committee has given another $700,000 since 2002.

I called Sierra Nevada several times and the firm declined to comment.

Though it recently branched out into aerospace, Sierra Nevada is primarily known for its intelligence work. The company’s spy plane ops go well beyond Mexico. Big Safari hired the firm to run a similar mission in Africa. Sources say the project, known as Atlas, involved sending manned, private spy planes over the Sahara desert in Mali. Like most of Sierra Nevada’s contracts with Big Safari, these surveillance projects were offered without competitive bidding.

Sierra Nevada has integrated cameras on killer drones. One drone-based camera can monitor an area roughly the size of an entire city.

Sole source contracts have a long and shady history in Washington. That’s why in 1984, Congress passed a law mandating competitive bidding, except in rare cases, for government agencies looking to spend taxpayer money. “The reason for competition,” says Charles Tiefer, a contracting expert at Baltimore University School of Law, “is that it lowers price, it provides equal opportunity, and it combats corruption.”

Efforts to skirt the law have led to a number of high profile scandals. During the second Iraq War, for instance, Halliburton, the oilfield services firm once headed by Dick Cheney, rang up $1.4 billion in questionable charges, according to Congress.

The incident led to considerable backlash on Capitol Hill. But Big Safari’s habit of offering no bid contracts to major defense firms has largely gone unnoticed. Since 2005, the organization Topps works for has handed out $31 billion to a handful of companies; 96 percent of the money was awarded without competition. (Big Safari won’t comment on these numbers because of “operational security.”)

During our brief phone conversation in September, Topps confirmed that his office shuns competitive bidding. “We have used the same contracting procedures for the past 61 years,” he added.

But everything Big Safari does, according to Topps, is within the confines of the law. There are legal exemptions, he told me, “that allow us to do things quick and secretively so that we can make sure that our enemies [don’t find out about it].”

For years, Tiefer, the Baltimore law professor, has worked on contracting issues with Congress. But when I told him about my conversation with the colonel, he was surprised. Big Safari, he says, “sounds like a rogue agency. They think none of the laws apply to them.”

There is no group in government, Tiefer says, that has blanket exemptions from the law. They just have to engage in a bidding process in a secretive way. The exemptions, he says, even for national security reasons, are supposed to be made case-by-case. “The head of this agency is a one-man wrecking crew,” he says, “for the federal system of competitive contracting.”

Wreckage of the plane crash in Colombia (Noticias RCN)

As we continued talking on the phone, Topps was pleasant. But he made sure to stress that he wasn’t going to make it easy for me learn more about Sierra Nevada or its contracts. “Don’t be angry or upset when your FOIA request is turned down,” he said. “That’s just the way we do business here at Big Safari.”

His biggest concern: In my Mexico story, I had included the names of contractors. That, he said, was already making it hard to do business. Mentioning the Ozmens, he indicated, was also a bad move. “When you put out individual names of people it immediately puts their lives at risk, whether you are talking at terrorists in the Middle East or drug lords in Mexico.”

I pointed out that the company is a major defense firm, and that part of my job was letting people know how government money is spent. Besides, the names of the contractors aren’t classified.

Despite his irritation, Topps offered me a unique opportunity. He invited me to Wright Patterson Air Force Base in Dayton, Ohio, to meet him for a longer, on-the-record interview. He was willing to take his secretive agency out of the shadows, but he wanted the chance to persuade me to be sensitive to his security needs.

It never happened. I was all set to go when two weeks later, a Sierra Nevada spy plane crashed in Colombia, killing three Americans and one Panamanian. The mission, I quickly learned, was another Big Safari op. The agency had hired Sierra Nevada to spy on Colombian drug boats.

When I wrote the story in early October, I once again named names. No matter how much I wanted access, it was more important to let readers know what that plane was doing and how taxpayer money was being spent.

Topps apparently didn’t agree. After reading my story, he cancelled the trip. “It seems to me you are trying to smear individual leaders,” he wrote in an email. “I won’t be a part of your stories any longer.”