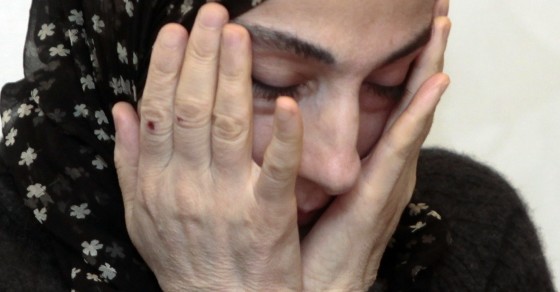 Boston Bomber’s Mother: My Son Is In “The Claws Of A Predator”
By Sarah Kaufman

Boston Bomber’s Mother: My Son Is In “The Claws Of A Predator”

Boston bomber Dzhokhar Tsarnaev was sentenced to death Friday. Contacted by Vocativ shortly after the sentence was handed down, Tsarnaev’s mother, who lives in Dagestan, had no comment about her son’s fate. In April, when Tsarnaev was found guilty, she lashed out against the U.S. in an exclusive interview with Vocativ, below.

The mother of Boston bomber Dzhokhar Tsarnaev sent an angry diatribe against Americans to Vocativ after her son was found guilty on all charges in his trial for the 2013 Boston Marathon bombing — the worst terror attack on U.S. soil since 9/11.

Zubeidat Tsarnaeva sent the messages, many in all caps punctuated repeatedly with exclamation marks and sad emoticons, to Vocativ via WhatsApp in the hours after the verdict Wednesday. In the exclusive interview via the messaging app, she insisted her sons are innocent and said the United States “WILL PAY FOR MY SONS AND THE SONS OF ISLAM, PERMANENTLY!!!”

“MY SONS ARE INNOCENT, AS INNOCENT AS ALL THOSE WHO ARE BEING KILLED BY YOUR COUNTRY,” she wrote.

“TODAY THEY ARE KILLING MUSLIMS, AND TOMORROW WILL COME YOUR TURN AND HE, WHO DOUBTS THIS IS DEEPLY MISTAKEN!!!!!” she pledged.

Tsarnaeva, who moved from Cambridge, Mass., back to Dagestan after being arrested for shoplifting in 2012, said her sons were protecting Muslims internationally. Some of her messages were in English. The others were in Russian and translated by Vocativ. “NO ONE WILL PROTECT YOU GUYS LIKE MY SONS DID THEIR BROTHERS AND SISTERS ALL OVER THE WORLD,” she messaged.

More Tsarnaev Mom: My Boston Bomber Son Is "The Best Of The Best"

Dzhokhar and his older brother, Tamerlan, planted two shrapnel-packed pressure-cooker bombs near the finish line of the Boston Marathon on April 15, 2013, killing three people and injuring as many as 264. They later killed a fourth person, MIT police officer Sean Collier. The deadly attack put the Boston area on edge for days until Tamerlan was killed in the ensuing manhunt and Dzhokhar was captured hiding in a dry-docked boat. The damning evidence at the trial included a confession Dzhokhar scrawled inside the vessel. “Stop killing our innocent people and we will stop,” he wrote. In a video presented by prosecutors, he is seen placing one of the bombs near where an 8-year-old boy was standing. That little boy, Martin Richard, was killed and his 6-year-old sister was among those seriously injured.

The guilty verdict set the stage for the next phase of the trial, in which the jury will decide whether to sentence Dzhokhar to death or life in prison without the possibility of parole. His defense attorney, Judy Clarke, is expected to emphasize his youth—he was 19 years old at the time of the attack—and argue that he was manipulated by Tamerlan, 26. “If not for Tamerlan, it would not have happened,” Clarke told the jury. She is also expected to claim that Dzhokhar was sent into a downward spiral by the politics in Chechnya, where the family has roots, and by his parents’ divorce.

In her WhatsApp messages, Zubeidat Tsarnaeva said: “HOW CAN A MOTHER FEEL WHOSE SON IS IN THE CLAWS OF A PREDATOR PREPARING TO TEAR HIM TO PIECES LIKE MEAT ??? (((((((((“ (The Russian version of a sad emoticon does not include a colon for eyes.)

“THEY WILL PAY FOR MY SONS AND THE SONS OF ISLAM, PERMANENTLY!!! THE TEARS OF THEIR MOTHERS WILL BE FUEL FOR THEM IN HELL…” she wrote.

Vocativ obtained the mother’s phone number by locating photos of her holding signs with the number written on it. The photos were posted on VKontakte, a Russian social media site, as part of previous fundraising efforts to support the Tsarnaev family. Vocativ also requested that she send a selfie with a dated slip of paper during the WhatsApp interview to verify that it was her sending the messages. She sent the photo with the hand-written date, which she asked Vocativ not to publish. In the photo, she has a solemn expression on her face and is wearing a black hijab. In the background, there is a blue crushed velvet armchair with golden embellishment. The slip of paper she holds in her hand says, “Zubeidat mother of two precious brothers Tamarlan Djahar April 9, 2015.”

The WhatsApp messages were her latest defense of her sons. Appearing at a news conference shortly after the bombing in 2013, she insisted the charges against her children were “nonsense.” She also told CNN she believed the tragedy was a “really big play” with “paint instead of blood.”

Dzhokhar can only be sentenced to death by a unanimous vote of the jury. If he’s not given the death penalty, he will spend his life behind bars.

Along with the interview, Tsarnaeva sent Vocativ a statement via WhatsApp. The translation of her statement is below:

HOW CAN A MOTHER FEEL WHOSE SON IS IN THE CLAWS OF A PREDATOR PREPARING TO TEAR HIM TO PIECES LIKE MEAT ??? ((((((((( BUT THERE IS AN ABUNDANCE OF SUCH MOTHERS, WHO BURY THEIR BEST SONS IN THE GROUND WHO ARE TORMENTED BY PREDATORS, LIKE BRAVE YOUNG EAGLES SOARING THROUGH THE OPEN SKY, LIMITLESS, AND WHO IN ONE MOMENT AND IN ONE INSTANT END UP IN THE CLAWS OF BLOODTHIRSTY AND RAVENOUS BEASTS, WHOM THEY FEED TO THEIR EMPTY AND TERRIFYING BELLY! (((

I’M TALKING ABOUT THE SONS OF ISLAM, AND NOT ONLY THE SONS BUT ALL PEOPLE ADHERING TO THIS RELIGION, WHOM THEY ANNIHILATE, AS IF THEY WERE NOXIOUS INSECTS OR ESPECIALLY DANGEROUS BEASTS, AROUND THE WORLD! ((((((( SOME PEOPLE, OR SHALL WE SAY, MANY PEOPLE, DON’T CARE ABOUT THIS AND THEY SLEEP KNOWING AND SEEING THIS AND CAN PEACEFULLY LIVE, EVEN GOING THROUGH THEIR DAILY GRIND, AS LONG AS IT DOESN’T CONCERN THEM! ;(;(;;

BUT MY SONS WERE NOT PART OF THE NUMBER OF SUCH UNEMOTIONAL AND BRAINLESS ANIMALS AND THE PAIN OF THE MOTHERS AND FATHERS, SONS AND DAUGHTERS OF ISLAM TORMENTED THEM, DAY AND NIGHT, UP TO THIS DAY THEY HAVE RECOGNIZED WHO IS KILLED AROUND THE WORLD, FOR NOTHING! ((((((((((

THEY WILL PAY FOR MY SONS AND THE SONS OF ISLAM, PERMANENTLY!!! THE TEARS OF THEIR MOTHERS WILL BE FUEL FOR THEM IN HELL, AND ALSO THEIR BLOOD, I AM DOUBTLESS AND ETERNALLY GLAD THAT I KNOW THIS FROM THE WORDS OF THE CREATOR, NOT JUST ANYONE’S WORDS!!!!!!

TODAY THEY ARE KILLING MUSLIMS, AND TOMORROW WILL COME YOUR TURN AND HE, WHO DOUBTS THIS IS DEEPLY MISTAKEN!!!!!

GLORY TO THE ONE CREATOR OF THE UNIVERSE, WHO GAVE ME THE BEST SONS AND LET ANYONE TRY TO FORCE ME TO REJECT THEIR WORDS OR COMPLAIN ABOUT THEM !!!!!!!!!! NO ONE AND NEVER, NOT THAT KIND OF PERSON OR ANY PERSON WHO MIGHT BE ON THIS EARTH, WHOM I WOULD BE SCARED OF, EXCEPT ALMIGHTY ALLAH, RULER OF THE TWO KINGDOMS, THIS ONE AND THE ETERNAL ONE!!! THE LOVED ONE AND ETERNAL ONE WHOM WE WILL RETURN TO AT THE BITTER END.

HE WHO DARES TO DOUBT THIS IS UNBLESSED!

ONLY GOD KNOWS WHAT WE DO NOT KNOW!!! WE PUT OUR HOPE IN HIM, WE CALL UPON HIM, HIM THE ONLY ONE WE ARE HELD IN HIS REDEMPTION!!! SO THERE IS NOT FEAR AMONG ANY OF US!!!!!! GLORY TO THE ETERNAL ALMIGHTY ALLAH!!!! TO THE GOD OF THE KINGDOMS!!!! THE ONLY ONE AMONG WHOM THERE IS NO EQUAL!!!!

SO THERE YOU HAVE IT, DEAR!

THE MOTHER OF THE BROTHERS THE BEST TWO BROTHERS, TAMERLAN AND DZAKHAR, ZUBEIDAT!!!!!

Boston Bomber’s Mom: My Son Is “The Best Of The Best” (Vocativ)