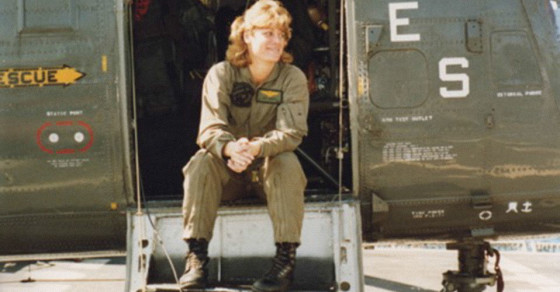 On the Front Line, Female Soldiers Lean In Harder
By Elizabeth Kulze

On the Front Line, Female Soldiers Lean In Harder 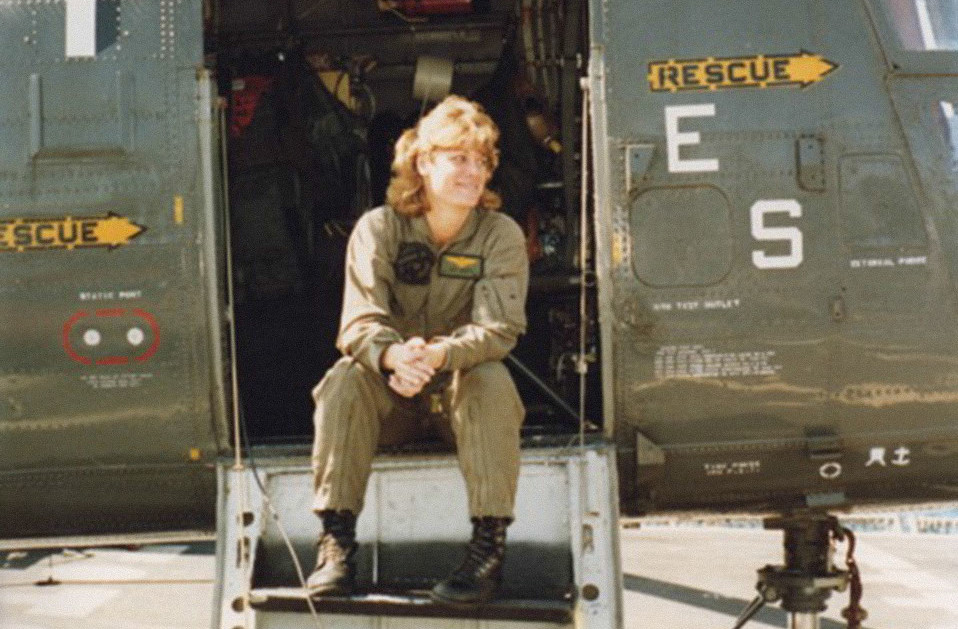 When Joy Bronson Smith got her wings in 1987, she was the only woman in a class of 30 navy pilots. In aviation officer school, she had slept in a room with three empty beds because there was no one like her to fill them. And though Smith says she “didn’t have anyone to talk to or blow off steam with,” she had no problem doing her job.

After graduating she checked into her flight squadron the same day as a male friend. He was called to serve immediately, but Smith was forced to wait. Ships weren’t taking women. “After about a year I went to my commanding officer, and when the next ship came along I said, ‘Can you at least ask them if they’ll take me?”’

As if by fate, the commanding officer of the USS Wabash had a daughter in ROTC and sympathized with Smith’s plight. “You got a woman?” she remembers him saying. “Bring her on.”

Smith spent the next six months on an aircraft carrier support ship with men she calls “10,000 of my best guy friends.” Naturally, she tackled a number of unique challenges during her deployment, including conditioning herself to the isolation that came with living in separate quarters, and the time an Australian reporter spun her personal story in order to run the headline “Navy Pilot Yearns for Housework” on the cover of a Perth newspaper. (Afterward, her call sign was changed from “Spunky” to “June,” as in June Cleaver.)

But in spite of all this, she made it through. “I didn’t need any other girls to hold hands with,” Smith says. “I just had to be excellent at everything I did. And that’s all that women serving today should have to do.”

Gender integration is still a hot point of contention for the U.S. military nearly three decades later, especially when it comes to ground combat units. For female service members, the right to fight has been a disappointingly taxing and drawn-out battle, but two weeks ago a long-sought victory finally arrived. The Army announced that it would be opening up 33,000 jobs in units that had previously been off-limits to women because of the ground combat exclusion policy.

The move comes one year after Defense Secretary Leon Panetta announced that his department would repeal the controversial practice that explicitly barred women from serving on the front line. The media has meticulously trailed the mainstream women’s movement as it rallies for things like abortion rights and equal pay, but servicewomen have been quietly waging their own campaign for something the rest of us legally achieved in the ’60s. And while it’s not quite as emotionally charged as the military’s sexual assault fiasco, it’s still a critical issue, not just for servicewomen, but for all who believe in equal opportunity.

For those who have been crusading against the policy for years, this was a rare, celebratory moment, but only a small coup in a bureaucratic war of attrition fought for decades though petitions and lawsuits. Historically, numerous federal barriers have beleaguered the women-as-warriors cause. Following a petition to Congress from female aviators in the Air Force and the Navy, the Department of Defense actually repealed all legal prohibitions to combat service back in 1993, but the Pentagon couldn’t swallow it. The following year, they instituted a departmental policy in its place: Women would be able to fight on the sea and in the air, but not on the ground. Even after the changes announced last week, 100,000 direct combat jobs still remain closed to women.

In 2012, two female Army reservists sued the DOD and the Army over the categorical exclusion of women in combat roles.  Their lawsuit was followed by a companion lawsuit from the ACLU. “I think that was certainly the tipping point,” says Col. Ellen Haring, one of the original plaintiffs. Haring is a 30-year Army reservist and the director of the Combat Integration Initiative, which is sponsored by Women in International Security (WIIS), an international think tank.

“In February of 2012 they opened 14,000 new jobs to women and touted it like it was some big advancement,” Haring says. “So that’s when we decided to go forward with the lawsuit.” At the time, 238,000 positions still remained closed.  Smith, who is currently producing a documentary about the issue, was comparably dismayed. “I thought that by the time my daughters were in college that things would have changed,” she says. “But this is still a situation where the federal government can prevent you from getting a job solely because of your gender.”

For the most part, the recently opened positions themselves don’t involve new roles for women, but merely the same jobs within previously restricted combat units. They include posts such as military police and intelligence analyst, to the ironically domestic-sounding food service specialist and shower/laundry clothing repair specialist. And then there are the intimidating and impressive vocations of 21st century warfare, including biological, radiological and nuclear warrant officer and electromagnetic spectrum manager nodal network systems operator-maintainer. However, jobs in infantry units, the Army’s “backbone” of ground combat forces, and those in Special Operations Command, remain off-limits. These include basic field duties like operating mortars and “capturing, destroying and repelling enemy ground forces.”

Despite the restrictions, servicewomen have engaged in ground combat on many occasions during the last 12 years. “The combat exclusion rule…ignores the reality of modern warfare,” says the ACLU on its Blog of Rights. “Women in combat are already serving their country in the Iraq and Afghanistan wars, where there are no front lines.” So far, 150 of them have died, and more than 850 have been wounded.

Haring with members of her company in 1987

Smith was hoping the repeal would come well before Desert Storm in 1990, but three wars and thousands of excluded women later, the movement is only just beginning to get traction. “There are amazing women who have done things that would just knock your socks off,” she says. “But these changes have been so ridiculously incremental that it simply pains me.”

For an Army that has challenged recruits to “be all that you can be,” the fact that thousands of servicewomen have been barred from doing just that is disingenuous at best, especially when those solders are qualified and willing to serve. Unbeknownst to many, the U.S. is actually playing catchup in this simple quest for equality. They are many countries, including Canada, Norway, Denmark and Sweden, who have fully integrated militaries. “We’re not nearly as progressive as we think we are,” Haring says.

Critics—and they are many—tend to employ the same repetitive arguments against women in infantry units, including priggish rationales like “protecting the nation’s mothers,” or more predictable grounds like physical strength and the concept of “critical mass” (the Army’s excuse for not assigning a woman to an all-male unit). And while these are important issues, they tend to assume that women will be arbitrarily thrown into the fray without any proper oversight.

Servicewomen like Haring and Smith are actually very much in favor of establishing clear physical requirements, and think they should be even more stringent than the general fitness test used today. The Army’s current assessment (push-ups, pull-ups and a 2-mile run) sets the bar lower for women than for men, which Haring sees as part of the Army’s problem. “From the beginning we have always said, just make one physical requirement for each job that everyone, male or female, must meet.” This way, the best soldiers, regardless of gender, will be the ones selected. In reality, blanket exclusion compromises not just women, but the entire Army.

Smith and her fellow airmen in 1988

Today most military occupational specialties (MOS) require only cognitive screening evaluations, despite having distinct physical requirements. In other words, standardized and specialized physical screening tests are not only equitable, but they make logical sense. Haring comments on the current state of affairs where certain men find it difficult to reach large guns because they were never screened for height or arm-reach prior to their assignments. As a result, some of the world’s finest soldiers are forced to stand on stools.

In line with the recent announcements, the Army’s Training and Doctrine Command is reevaluating and determining the physical screening criterion for each MOS in order to gauge whether or not to open the closed specialties to women, and under which conditions. Their recommendations will then be passed on to the DOD, followed by Congress for approval. The initiative is termed “Solider 2020,” and is described as “the U.S. Army’s effort to capitalize on the last 12 years of battlefield lessons and advancements in the Army Profession.”

Apart from the fact that risking life and limb for one’s country should be an opportunity open to all of those brave and competent enough to do it, honing one’s skills through combat positions is one of the primary ways soldiers advance to higher ranks. “Eighty percent of generals and admirals get pulled from direct combat positions,” says Haring. “And women have been structurally excluded from that pipeline.” Additionally, a more gender-balanced force is of fundamental importance when dealing with civilians on the ground, according to Mari Skåre, NATO secretary general’s special representative for women, peace and security. As any man or woman can understand, gender awareness is an essential tool for dealing with the spoils of war, including violence against women and children.

Haring as company commander in 1992

Of course, as with all new faces in a room, assimilation will not be without its challenges. “The first female fighter pilots faced debilitating discrimination,” says Haring. But her hope is that, with proper training and the right leadership, we can do a better job today that we did then. “We can’t have women under officers that will outright reject them,” she says. “Good leaders can make all the difference in the world.” Haring and WIIS also believe that “every single solider, sailor, and airman” needs to receive training similar to that conducted after the repeal of “don’t ask, don’t tell.” In the way of a college orientation session, service members were taught how to handle various situations through role-playing and hypothetical scenarios. The intention was to mitigate potential concerns and to ensure that people act appropriately.

Haring believes that openness through communication is another key component to ensuring a smooth transition, but if the history of our armed forces’ dealings with sexual assault is any indication, this isn’t exactly their forte.

As of today, the Army and DOD have yet to announce a timeline for integrating Special Operations, what Haring calls “the cream of the military crop.” This includes legendary forces such as the Green Berets and Army Rangers, primary breeding grounds for the nation’s war heroes, and maybe one day, heroines. “All of this is really just another lens through which you can look at America’s attitudes towards gender,” Smith says. “We have all of these deeply ingrained traditional views, and that’s the stuff the warrior myth is made of.”