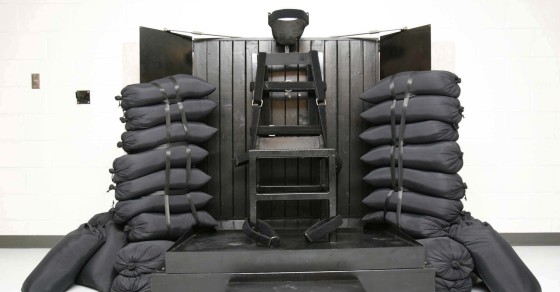 This Is What A Utah Firing Squad Execution Looks Like

If Governor Gary Herbert signs the bill on his desk into law, Utah will have the option to sentence convicted prisoners to the firing squad for the first time in more than a decade. But what exactly will that look like? For a preview, we can turn to Utah’s most recent firing squad execution—that of Ronnie Lee Gardner in 2010 who received his sentence before the state’s ban went into effect.

Inside Utah State Prison near Salt Lake City, officials strapped Gardner to a specially designed chair surrounded by sandbags and with a metal tray underneath it to collect his blood. As The New York Times reported, guards placed a hood over Gardner’s head and a paper target over his heart.

Then, five police officers lined up, took aim and fired their .30-caliber Winchester rifles. Organizers loaded one of the five weapons with an “ineffective” round that would give the same recoil as a live one, ensuring that no one would ever really know who fired a fatal shot.

It's the official photo of the firing squad execution chamber for the State of Utah! https://t.co/TPPO57BR7i @gregorg pic.twitter.com/pYjBkJoJGJ

Due to a shortage of lethal-injection drugs—which has led to unpredictable and inhumane executions—state legislators proposed and passed a bill this year to reinstitute the use of firing squads as a failsafe “second option” for carrying out the death penalty.

Death by firing squad can be more humane and painless than by lethal injection—particularly if one considers the case of Clayton Lockett, a convicted Oklahoma rapist and murderer, who writhed and gagged for 43 minutes after receiving a mixture of substitute execution drugs. On the other hand, should the shooters miss their target by just a little bit, death could be just as slow and painful.

The video below from The Guardian’s 2010 report on Gardner’s execution not only captures the process in detail, but features interviews with his friends and family.