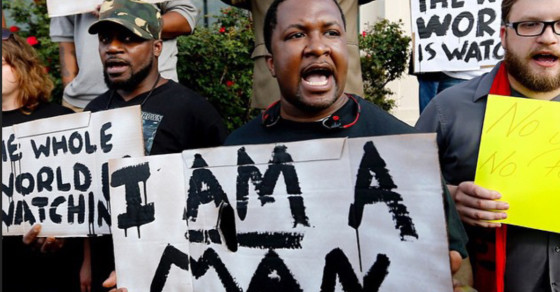 Protest Breaks Out In South Carolina Over Walter Scott’s Death

Protesters massed outside the city hall in North Charleston in South Carolina in the wake of the police shooting of an unarmed black man. Instagram posts of the protest show supporters holding signs with the emblematic hashtag of the police brutality debate #BlackLivesMatter, while others have broader messages such as: “Gathered together this morning with our neighbors to work for a better city. #NorthCharleston.”

On Tuesday, a video of South Carolina police officer Michael Slager shooting Walter Scott in the back went viral. Scott’s death, reminiscent of the deaths of Michael Brown and Eric Garner, has incited anger on social media and added fuel to the national debate over whether police officers are too quick to use lethal force against unarmed black men.

The video, which was obtained by the New York Times, shows Slager firing eight times at Scott, as he runs away from the officer. Slager ultimately hit the 50-year-old man in the back, killing him. The police officer said that the incident occurred after Scott had taken his stun gun after a traffic stop on Saturday. Slager has since been charged with murder for Scott’s death.

Gathered together this morning with our neighbors to work for a better city. #NorthCharleston