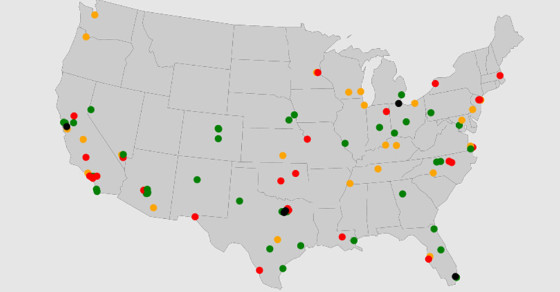 Is Your Police Force Wearing Body Cameras?
By Abigail Tracy 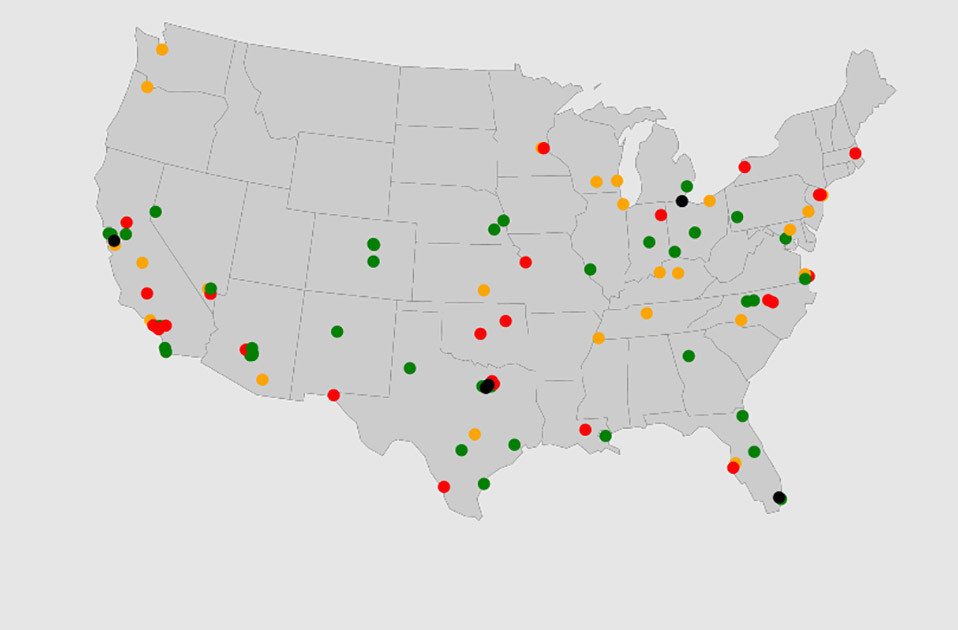 In the aftermath of the fatal police shooting of Michael Brown on Aug. 9 in Ferguson, Missouri, the issues of racial discrimination, police brutality and the militarization of local police forces have inspired debates that are playing out loudly across the country.

And in response to the conflict, several law enforcement agencies have turned to surveillance technology—specifically, body-worn cameras for police officers—as a means of holding cops accountable for their actions in the field, and as a way to regain the public’s trust. For instance, just over the past two weeks, Minneapolis and Austin announced plans to equip their forces with mini wearable cameras.

So just how widespread is this phenomenon? Vocativ reached out to police departments in the 100 most populous U.S. cities, and you can see a map of our findings below. Though four cities—Fremont, California; Sacramento; Arlington, Texas; and Anchorage—did not respond to our inquiries, we determined that 41 cities use body cams on some of their officers, 25 have plans to implement body cams and 30 cities do not use or plan to use cams at this time.

Proponents of the technology argue that had Ferguson police officer Darren Wilson been wearing a body camera when he shot and killed Brown, there would have been more clarity in his role in the event, and unrest in the Missouri town could have been avoided.

In a report released earlier this fall, the American Civil Liberties Union argued in favor of the implementation of body cameras after it studied the efficacy of the technology in 63 police departments. “Body-worn cameras can help improve the high-quality public service expected of police officers and promote the perceived legitimacy and sense of procedural justice that communities have about their police departments,” the group stated.

However, beyond obvious privacy issues, the main roadblock for police departments acquiring personal on-duty cameras is the expense. Body cameras can cost anywhere between $150 and $600 each, in addition to tens of thousands of dollars to store and maintain the footage. For a large police force, that could result in a multimillion-dollar bill year over year.

Still, many departments are deciding to take the plunge. One of the top distributors of body cameras, Taser International, reported that there are 1,200 law enforcement agencies scattered throughout the country that have deployed its technology—and that’s just Taser brand cameras. (VieVu, the other main player in the space, did not provide information about cities using its technology.)

One caveat: Body cameras are useless if they are not used correctly. For the technology to be effective, police officers have to not only be wearing the cameras, but they also have to turn them on. While this seems like a no-brainer, cops turning off their body cams has been a major issue.

This month alone, there have been two high-profile reports of police-involved shootings in which the body cameras had not been turned on. A Spokane, Washington, police officer was involved in a non-fatal shooting of domestic violence suspect Joseph Hensz on Sunday while his camera was powered down. And according to a new report released on Friday, one of the police officers involved in the fatal September shooting of Darrien Hunt in Saratoga Springs, Florida, was also wearing a camera that just happened to be turned off.