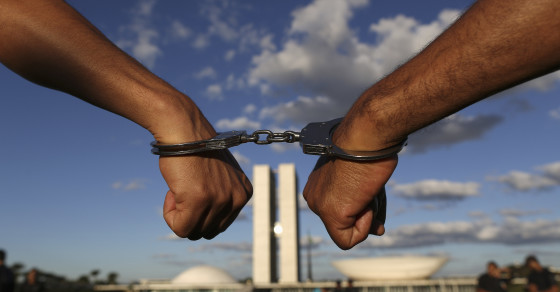 Police in Oregon have held a man in jail for almost three years without a trial, lawyer or any criminal charges. Benito Vasquez-Hernandez was taken into custody in 2012 in an effort to get him to testify against his son in a murder trial, the Oregonian reports. Prosecutors say that the 59-year-old is instrumental to their case and that they have no choice. If they let him go, they doubt he would return to testify. Vasquez-Hernandez, an immigrant who can’t read, write and has little knowledge of the justice system, has been held in jail for 898 days.

In conversations with detectives, Vasquez-Hernandez implicated his son in the murder, and told them that the son had fled to Mexico. That led to his arrest and jailing for hindering the prosecution. Even though the son has since confessed to the crime, he didn’t tell detectives where the body was hidden, leaving them with no physical evidence. In Oregon, judges can either hold material witnesses until they testify, or release them pending trial. The trial is scheduled to start next Tuesday.