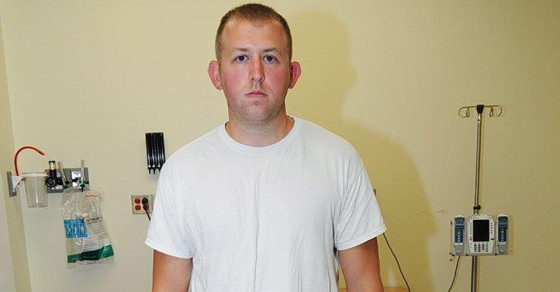 Legal Analysis: Why Did Darren Wilson Get Off?
By Cameron Grant

Legal Analysis: Why Did Darren Wilson Get Off?

Police officer Darren Wilson shot and killed 18-year-old Michael Brown on Aug. 9 in the streets of Ferguson, Missouri. After months of racially charged protests and a lengthy grand jury proceeding, prosecutor Robert McCulloch announced from a St. Louis County courtroom last night that Wilson will not face charges in connection with the shooting.

For those who view Brown’s death as unjustified, the decision raises some troubling questions. For instance: How could this happen? And: How can a white cop shoot an unarmed black teen and walk away unscathed, without any charges?

From a legal perspective, the decision not to charge Wilson follows from a simple conclusion. The grand jury’s job was to determine not whether Wilson was guilty or innocent, but whether “probable cause” exists to believe Wilson committed a crime when he shot Michael Brown. Viewing all the evidence, the grand jury determined probable cause did not exist.

This conclusion might come as a surprise to those familiar with the aphorism that the burden to indict is so light, a skilled prosecutor could get a grand jury to indict a ham sandwich. Theoretically, the grand jury serves as a preliminary check on prosecutorial power. Whereas prosecutors have wide discretion to bring any charge, against any person, for any crime, the grand jury should serve to check that power by ensuring that before a criminal defendant is charged, a jury representing (supposedly) a cross-section of the community must decide that a reasonable person could find guilt, based on the evidence the government possesses. In reality, however, grand jury indictments are often viewed skeptically as rubber-stamp approvals of a prosecutor’s decision to bring charges against a criminal defendant.

In explaining the grand jury’s refusal to indict, prosecutor McCulloch stated that the grand jury separated “fact from fiction,” and concluded probable cause did not exist to convict Wilson of any charge, including involuntary manslaughter, which under Missouri law requires only that death be caused “recklessly.” McCulloch noted that the grand jury heard testimony from over 60 witnesses, for over 70 hours, before reaching its decision. Based on that testimony and other evidence (including three separate autopsies), the grand jury concluded that Wilson did not act recklessly, despite the fact that Brown was, indisputably, shot multiple times while unarmed.

For many of Brown’s advocates, the grand jury’s refusal to indict for at least involuntary manslaughter will be particularly difficult to swallow. Similar to the case of Trayvon Martin, Brown was indisputably gunned down while unarmed. It would seem that this fact alone should be a sufficient basis for criminal charges. But whereas George Zimmerman was acquitted by a jury of his peers based on self-defense, Darren Wilson will not face charges at all.

McCulloch did not identify which particular piece of evidence the grand jury relied upon to reach its decision. Was there, for instance, a key eyewitness account jurors found so compelling that self-defense was the only possible conclusion? Did one particular piece of physical evidence lead jurors to conclude that Brown must have been the aggressor? Unless one of the jurors breaches Missouri’s law against discussing the proceedings, we’ll never know the particulars of their decision.

Though Wilson was not indicted, his legal worries are not over. Remember OJ Simpson? After being acquitted of the murders of Nicole Brown Simpson and Ronald Goldman, Simpson was found civilly liable for their deaths and ordered to pay damages. Similarly, Wilson could face a civil suit from Brown’s family for wrongful death and could be ordered to pay damages.

Wilson also has the lingering DOJ investigation to worry about. Remember Laurence Powell and Stacey Koon? Those two L.A. police officers were initially acquitted in state court of beating Rodney King, but were subsequently charged and convicted in federal court of violating King’s civil rights. Though prosecutor McCulloch said state and federal authorities fully cooperated in investigating Brown’s death, Wilson could still be charged under federal civil rights statutes—double jeopardy would not bar such a prosecution.

Cameron Grant is a New York-based attorney and legal analyst.