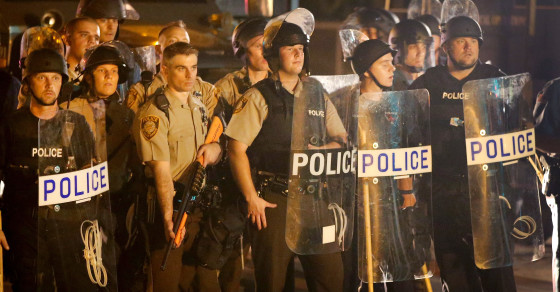 The Pre-Verdict Chatter Among Ferguson Cops and Their Supporters

Riot police during the summer protests in Ferguson.

Update: As of 6 p.m. EST Monday, the forum “St. Louis Cop Talk” has been taken offline.

With the grand jury verdict in the controversial Michael Brown shooting right around the corner (the ruling is expected Monday), Ferguson cops and their supporters are preparing for the fallout. Many are worried that regardless of the ruling—indictment of police officer Darren Wilson or not—there will be riots and protests in the small Missouri town that’s seen so much violence over the past few months.

The Police Wives Association is soliciting donations and has raised more than $5,000 over the past several weeks, according to local media outlet KMOV Mobile News. The group is accepting anything from food and drink to clothing and Tylenol, a continuation of its similar efforts during the protests in Ferguson at the end of the summer.

However, not all preparation is as benign. St. Louis Cop Talk, a forum for regional cops, has been active with chatter, opinions and advice about the predicted unrest in Ferguson.

Under the name “A Concerned Cop,” one person shared a warning: “If you do not have a gun, get one and get one soon. We will not be able to protect you or your family. It will be your responsibility to protect them. Our gutless commanders and politicians have neutered us. I’m serious, get a gun, get more than one, and keep one with you at all times.”

Other posts on the forum echo that sentiment, going so far as to label the protesters and activists in Ferguson as “terrorists,” and calling out local businesses that have identified themselves as supporters of the protests there.

Some users discussed using water hoses to “protect” the cops against the protesters. One, under the name “Retiree,” wrote, “I say if the protesters want to use shields and like equipment then the officers should incorporate using the fire dept and there [sic] hoses. …With the wind and temps what a great way to put a sudden stop to marches and protests.” An anonymous user who said he was a cop replied, “We can’t even hit our sticks on the ground.”