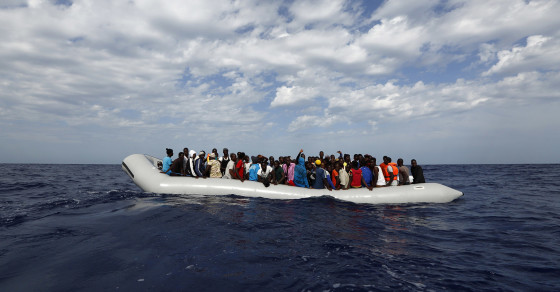 2015 Could Become The Deadliest Year Ever For Refugees

The Italian coast guard found 29 African refugees dead from hypothermia on Monday when the officers intercepted an inflatable boat off the island of Lampedusa. The victims are just a fraction of the almost 200 migrants who have already died fleeing their countries in 2015, according to the International Office of Migration, an agency that tracks and helps migrants. It says if trends continue, the 2015 human smuggling season could be the deadliest on record.

The increased risk has also brought more fatalities. The IOM has tracked almost 200 deaths this year across the globe. By the same time last year, it had recorded only 41 deaths.

Most of those making the trip across the sea are fleeing Syria, where a bloody civil war and the rise of ISIS have led to hundreds of thousands of deaths. Others are from African countries with ongoing violent conflicts, like Somalia and Libya.

“The wars and the difficult geo-political conditions in the region suggest that we can expect the flow of migrants and asylum seekers to continue for some time,” says Federico Soda, the director of the IOM’s Coordination Office for the Mediterranean in Rome, in a press release.