Apr 24, 2013 at 10:14 AM ET
An online gun dealer that until last week was running firearms sweepstakes on Facebook has decided to continue the contests on its homepage following a crackdown by the social network in the wake of a Vocativ investigation.
Gun dealer Pittsburgh Tactical, whose page was taken down on Saturday along with at least three others for violating Facebook’s advertising rules, is offering its gun sweepstakes on a new forum at its home page. In a message on its Facebook page that begins, “OK FOLKS, HUGE ANNOUNCEMENT!!!”, the company announced “the launch of its very own FORUMs page on our website!!! This is where all future contests and giveaways will take place.”
The company said that the move would protect the giveaways against crackdowns like the one Facebook enforced last week.  “This means that even if we get shut down on every social media site that exists, we will still be able to give FREE STUFF to you, our loyal FANS and Supporters!!!!!,” the message reads. 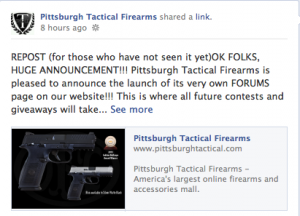 Most of the Facebook pages mentioned in Vocativ’s investigation of gun giveaways are now back up, though the contests have scrubbed. The Facebook pages of Gunsweeps and Grabagun.com appear still to be inactive.
In Facebook gun sweepstakes, dealers award free guns, gun parts and ammunition to participants who qualify by “liking” or sharing various pages, using an app, or simply clicking through to a website. There have already been at least 36 such giveaways in April, a massive spike from a total of nine in November 2012.
A Facebook spokesman told Vocativ the sweepstakes are technically ads and are in violation of the social network’s advertising rules. “Our ad guidelines prohibit promotion of the sale of weapons and the ad guidelines apply to pages with commercial content on them,” he said.
LoneStarGunTrader.com, a site where people can buy and sell weapons, posted a message on its Facebook page that is signed by the Facebook Ads team. It  informs the group that their ads are in violation of Advertising Guidelines.
“Continuing to run and create ads that violate our policies may result in additional action being taken on your account, including possible termination,” the message reads. 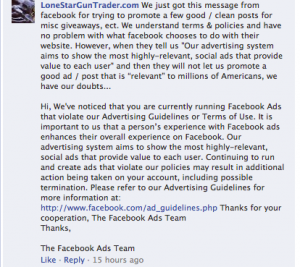 Word about Facebook’s scrutiny of gun giveaways has spread across the social network. Some gun companies are now informing their online supporters that they can no longer offer the contests. Florida based gun manufacturer Kel-Tec wrote in a message posted today: “Facebook has started removing companies that give a way guns as Facebook contests. So, we will still like to do some small give-a-ways, but can’t do guns any longer. Booooo!” 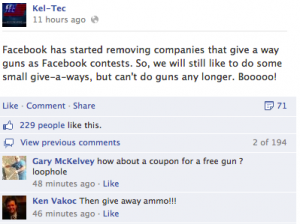