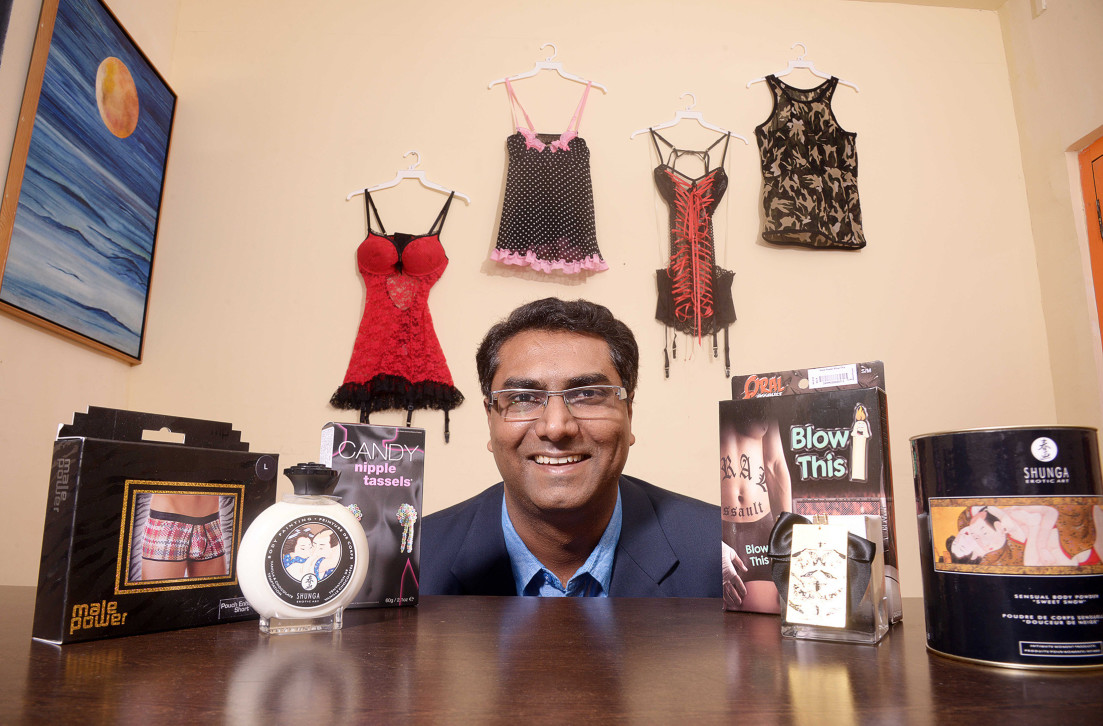 Samir Saraiya remembers when the light first went off in his head. He had stumbled across the results of a survey by the condom maker Durex that asked people around the world about, among other things, their use of sex toys. In India, where Saraiya lives, talking openly about sex is still fairly taboo, and sex toys aren’t exactly cocktail-party conversation.

But the survey found, curiously, that a large number of people in India, 13 percent, had actually experimented with sex toys. Saraiya, a former Microsoft executive, was sure the survey was nonsense. “How could so many people be using sex toys if not a single store in India was selling them?” he wondered.

Samir Saraiya found a need and filled it.
(Courtesy ThatsPersonal.com)

Saraiya decided to investigate, and he soon had his answer. Many women were indeed using sex toys—just not the kind you buy in a sex store. Bananas, carrots and cucumbers were doubling as phalluses; butter, Nivea cream and baby oil were serving as the lube.

Saraiya and his team showing off his company's products.
(Courtesy ThatsPersonal.com)

“We launched with one brand of edible body paint, and within two weeks we had sold out. We said: ‘This seems like a bit of a winner.’ We now have six different brands, in multiple flavors.” They include “real” Belgian chocolate, Kahlua, Cointreau, crème brûlée and tiramisu.

But it takes more than just a dotted condom or “sexy-nurse” role-playing costume to close a sex-toy sale in India. Some of ThatsPersonal.com’s customers want to know if the products are made from vegetarian ingredients, while others ask how many times they can reuse the toys—so they can calculate the cost per usage. “They want to know so they can plan whether it’s financially viable to use the product,” 41-year-old Saraiya explains.

Saraiya spends a lot of time educating potential customers about the benefits of sex toys—and also making sure he doesn’t run afoul of the law. The Indian Customs Act, which was drafted 150 years ago by a British politician, doesn’t say anything about sex toys per se, but it calls for fines and/or imprisonment for anyone found to be selling things in ways that are seen as “obscene.” That would include graphic pictures or overly racy language.

Indeed, for a country that created the Kama Sutra, India doesn’t make sex—or stashing a sex toy in your bathroom—very easy. Many people, unmarried and married, live with their extended families, and also have household helpers. Privacy is at a premium.

Which is why a key part of ThatsPersonal.com’s pitch to shoppers is discretion. Customers can have products delivered to their homes or businesses, and nothing on the packaging suggests to a family member or delivery person that there’s a sex toy inside. But if they still don’t feel comfortable with that arrangement, they can also pick up the packages at a location managed by the site’s logistics partner, Aramex. And not even Aramex knows exactly what’s in the packages. The shopper simply gets a text message saying there is a package for him or her to pick up.

Down the road, Saraiya is thinking about doing even more to camouflage his sex aids, so that if a random person looked at a container or bottle purchased from the site, he or she would have no idea that they’re staring at a sex toy. “We have to do this if we want to grow this market,” he says. “Their [customer] interest and the intent is there. It’s just the whole purchase aspect that is a cause of concern.”

Saraiya says that over the past year, he’s sold sex toys to between 10,000 and 15,000 Indians. The average customer on the site buys three products and spends a total of $35. The buyers are 70 percent male, and the average age is 24 to 30, he says. Most of the orders are from people in big cities, but interestingly, the 20 percent that come from smaller towns are four-to-five-times bigger than the typical big-city order.

How’s Saraiya’s family taking to his new line of work? When he quit Microsoft in Singapore and returned to Mumbai in 2012, he was focused on talking up the idea to investors. He made the rounds with a briefcase containing some of the sex toys. But he avoided telling his friends what he was up to. He particularly dreaded breaking the news to his Harvard-educated father, also a businessman, and his no-nonsense mother. He described their household as “normal,” not in the least conservative, but also not exactly Masters and Johnson.

His wife, also his college sweetheart, said she was fine with the venture as long as he made a lot of money doing it. The rest of his family and relatives, including his in-laws, found out about his sex-toy aspirations when a national newspaper ran a big story on his venture less than two weeks after it launched. His father, and even his in-laws, said they supported the idea as long as he didn’t bankrupt himself and their daughter. Saraiya has raised about $500,000 from angel investors, friends and even some family members.

Saraiya’s mother, who is a doctor, would still prefer that he do something else, but he and she have made peace by agreeing not to talk about it. Saraiya, a father of two girls, ages 6 and 2, says he has no clue what he’ll tell them about his work when they grow up. “I’ll cross that bridge when it comes,” he says.

Meanwhile, Saraiya’s trying to turn India into a nation of sexual adventurers. “I wish I were 21 again and could use all the products,” he says. “But I try as many as I can.”