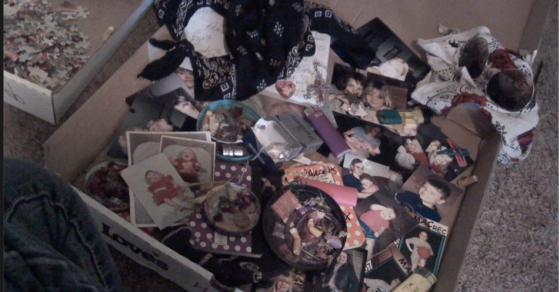 This Meth Witch Is the Diane Arbus of Tweaker Cellphone Photography

One of Oklahoma’s best and brightest, Lori Potarf grabbed a few headlines last week after she tried to avoid arrest by claiming she was allowed to use and possess meth because of her Wiccan religion. According to reports, police had stopped Potarf and her companion, Richard Henderson, along U.S. 81 for a broken tail light, and it didn’t take long for them to discover a stash of syringes, spoons and methamphetamine residue inside some Crown Royal liquor bags.

Despite insisting that witchcraft permitted her to dabble in the crystalline stimulant on First Amendment grounds, Potarf was hauled off to jail and charged with possession of narcotics and drug paraphernalia. The creative defense didn’t hold up, but the world did get something just as inspired and experimental out of the whole thing: the previously underappreciated cache of meth-fueled mobile uploads on Portaf’s Facebook page.

During what appears to be prolonged drug binges over the last few months, Potarf has used her cellphone camera to obsessively catalogue her everyday surroundings. At turns bleak and raw, ethereal and obsessive-compulsive, Potarf’s haunting images rival the work of at least half the trust-fund kids in art school and offer a warped glimpse of the world through the eyes of a tweaker. Here’s a sampling of this budding young artist’s deep portfolio.