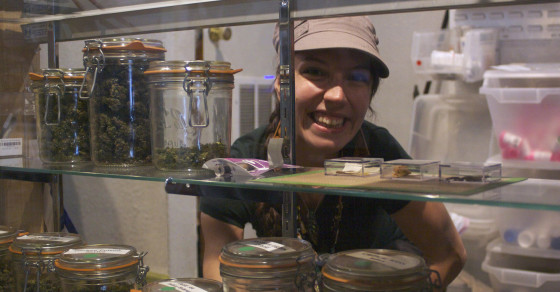 Jobs in the Weedconomy: The Budtender
By Bryan Schatz

Jobs in the Weedconomy: The Budtender 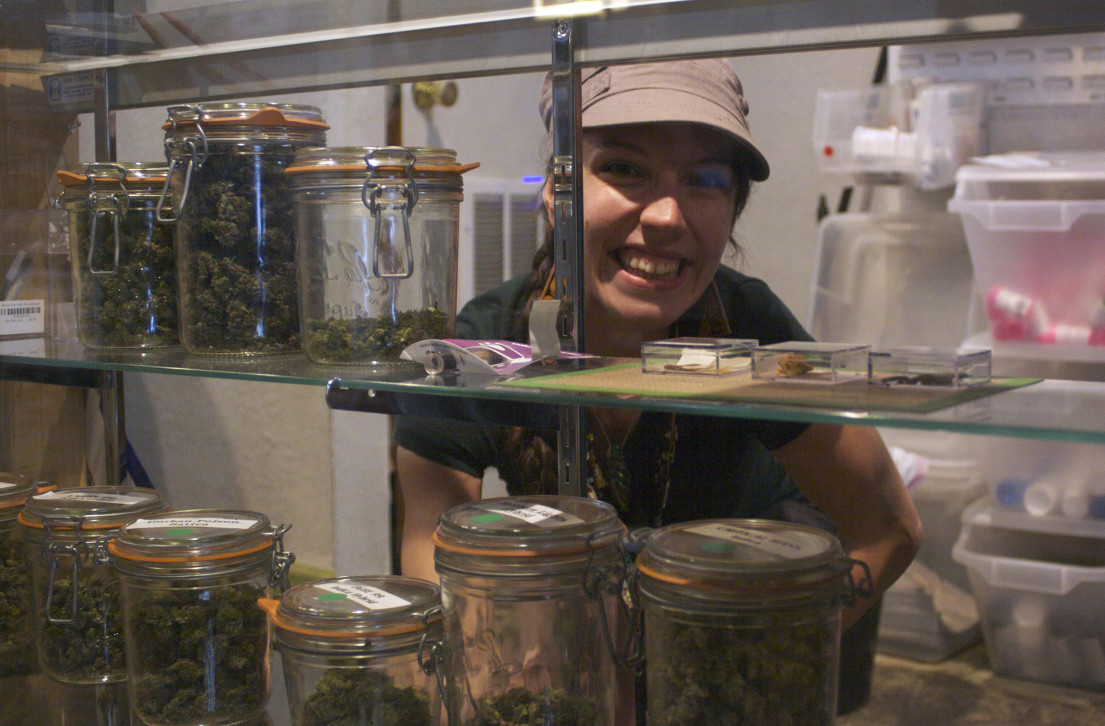 As Colorado’s $1 billion marijuana market coins first-time millionaires and creates thousands of new jobs, we trailed five different workers to collate snapshots of this new world of legalized weed. You can also meet a grower, a trimmer and a baker.

Through the back door of Denver’s Mile High Cannabis, in walks a college girl who wants to get blasted with her friends. She’s followed by an old dude with a wicked white wizard beard who’s looking to get inspiration for a new art project, and later by a middle-aged woman in a pink T-shirt, her hair in a bun and her eyes open wide—it’s her first time.

For Nichole West, 29, every customer visiting her dispensary is looking for something different. And despite the psychedelic posters and the stereotypical reggae soundtrack, West is not just some stoner; she’s a trained budtender, a mixologist of Mary Jane, culling just the right buds for your next bowl. “I can talk to you all day about getting high,” she says.

Of course, a propensity to get blasted and a sommelier-level knowledge of snacks won’t necessarily get your foot in the door to budtend at a dispensary, but it doesn’t hurt, either. And West, who’s responsible for hiring the budtending staff and mostly just wants to like the people she works with, does question applicants about their favorite strains and preferred methods of medicating, and she quizzes them on weight denominations.

“If you don’t answer quickly, you either haven’t smoked or sold enough weed in your life, and maybe this job isn’t for you,” she says. “I want you to be interested in what you’re selling.”

West herself has been in the industry in some form or another for 10 years. She started growing weed and living off the grid in Humboldt County, California, and then navigated the legal disaster that was the Golden State’s early medical marijuana industry—first as a weed-focused real estate agent for grow operations and later as a dispensary owner (prior to the Drug Enforcement Administration raids)—before she moved to Colorado’s greener pastures.

While the average salary of a Colorado marijuana dispensary manager hits around $48,000, plus benefits, it includes none of the stress of trying to pull this off in a state in limbo, like West’s native California. (“I’m not interested in being a criminal,” she says.) Meanwhile, entry-level budtenders walk in at the $11 to $12 per hour range and can move up.

West displays the latest goods—a smattering of lotions and potions for all varieties of physical and mental highs.

West’s workforce across several dispensaries has gone from 20 to 70 employees since Jan. 1 arrived and made all of this legal, and the applications keep rolling in. “Every 60 days, I throw away a stack of résumés this big,” she holds her fingers about 3 inches apart. “I haven’t had to put an ad out in months.”

On the side, West has begun teaching budtending courses at Clover Leaf University, the country’s first and only state-certificated marijuana educational program, where those looking to enter the industry can get the skills they need to compete for jobs. The people who get budtending gigs, for example, will be expected more often to come out of programs like this; they’ll know the laws and the product.

She demonstrates this knowledge by taking me through it all like I’m a client, ignoring the brownies and pixie sticks and regular ol’ flower bud like it’s yesterday’s news, and hits on the new stuff: marijuana-infused creams, bath tea bags, massage oils and lotions. She holds up a canister of bath salts—for those quieter moments when you want to get all Lebowski in the tub with candles and a joint. “This stuff mostly exacerbates a mental high if you’re also smoking, but otherwise it’s a physical high,” she says. “You get all tingly.”

On the surface, being a budtender seems a lot like being the local barista, bartender or even butcher. The person’s a trusted neighbor who recommends the best stuff and guides you through your choices, backed with years of experience and know-how, letting customers in on what’s fresh, what to expect from it, what to pair it with. But, to borrow one writer’s phrase, “it’s not all Smurfs and sunshine.”

One of Mile High Cannabis' budtenders, MarLeigh Schnepp, with her favorite strain, Ogre 99.

Sure, budtenders need to be familiar with strains, effects, edibles and extractions, but most of a budtender’s day revolves around knowing how not to break the law. Mundane shit, just as it sounds: Make sure things are packaged properly, sell within the weight requirements, check IDs and never, ever recommend that someone take more than the state’s suggested edibles dosage of 10 milligrams of active THC.

That last bit comes from what’s become known as the “Maureen Dowd experience.” Maureen Dowd, the New York Times columnist who penned an op-ed about eating a chocolate edible, not feeling anything, and then eating more and more until she had an eight-hour mental freak-out, became convinced she had died and no one was telling her.

“My biggest concern is keeping people compliant. How to not be a liability, how to not cost your business its license,” says West. Since it’s illegal for them to recommend anything above the 10 milligrams, she trains her budtenders to become robots on the dosage point, repeating the exact state warning that appears on all edibles packaging. She tells her employees: “Assume every customer is the MED trying to bust you.”

And then get as high as you want in your free time.

Bryan Schatz is a freelance journalist based in Istanbul. He’s written for Mother Jones, Pacific Standard, GOOD and others. Follow him on Twitter @BryanSchatz.

SPECIAL SERIES: JOBS IN THE WEEDCONOMY