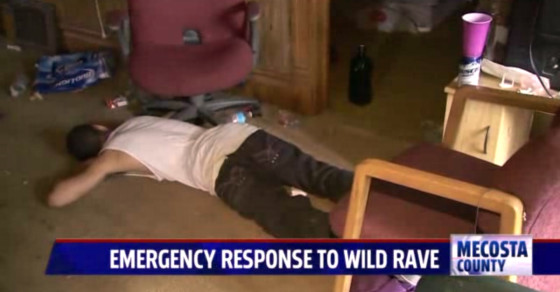 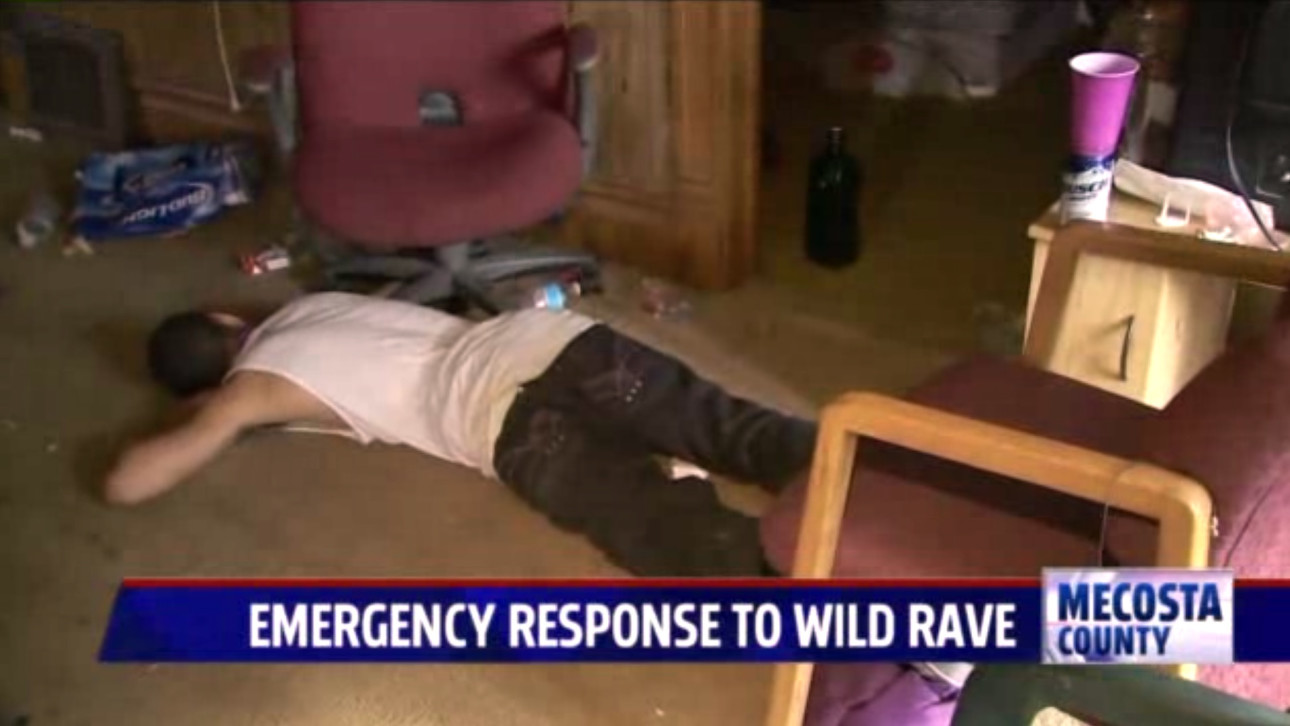 When Ray Hulin finally emerged from his drunken blackout on Sunday, he had lost his cellphone and any hope of getting a ride back home to Greenville, Michigan, 25 miles south. But what the 27-year-old didn’t realize is that he had also become the unwitting star prop in a local news video that has since gone viral.

Hulin was among the 2,000 people who spent Saturday night “trippin’ and wildin’ out” at a massive home-grown rave in Mecosta County that had cops cowering into the night as the party teetered on the brink of mayhem. By about 6 p.m. the next day, Hulin had still not called it quits and was so bombed that he passed out on the floor belonging to James Taylor, the blowout’s goateed 20-year-old host. That’s around the time when the local Fox News affiliate showed up to survey the party’s aftermath and play hardball with Taylor, whose own hilarious performance gets upstaged by Hulin’s motionless body around the 35-second mark. If you haven’t seen it yet, please treat yourself:

“I didn’t force anything down anybody’s throat,” Taylor says to the local news reporter asking the tough questions. “I didn’t make anybody stay here until 7:00 a.m. or 11 or whenever it is everybody finally left. I didn’t make this kid pass out on my floor.” In a deft display of comic timing, the cameraman nails the perfect pan to reveal Hulin facedown and motionless at Taylor’s feet. There was enough magic in Hulin’s silent performance to set Reddit ablaze, attract the attention of MTV and land him a cameo on Jimmy Kimmel Live.

But the whole thing doesn’t sit well with the Internet’s newest celebrity, whom Vocativ tracked down for a chat. “They made it look like I don’t know how to handle my shit,” Hulin tells us. “I’ve been way more fucked up before and was able to keep my composure.” Though in hindsight, he admits he was pretty faded. “I’m surprised I didn’t have alcohol poisoning, honestly.”

In granting Vocativ an exclusive interview, Hulin hopes to set the record straight on his prowess as a baller. The aspiring hip-hop artist insists that his rare moment of diminished fortitude came only after he delivered an heroic 20 straight hours of drinking and some high-level dumbassery.

“I know how to handle a party, dude,” he says. “And I feel like I handled this one party well.”

For Hulin, maintaining the brand isn’t just about personal pride, it’s also a matter of professional reputation. He just so happens to rap in a hip-hop group called—wait for it—PartieBoiz, whose major tracks include “Where the Partie At” and “Wildn Out.”

“I might be the smallest motherfucker in the crowd, but I’m always the loudest motherfucker with the biggest bottle,” says Hulin, who stands about 5-foot-5 and is known to many by his stage name, Ratchet. “Your party can have six kegs and 17 beer pong tables. I’ll still come and shut the bitch down like I own the place.”

Ray Hulin, aka "Ratchet," parties hard and parties often. He swears he doesn't usually pass out.

Saturday night’s rager was no exception, especially since Hulin was about to start a new job on Monday at a plastics factory. He met up with his buddies, Todd and Sam, around 8:30 p.m. in Greenville and grabbed a bottle of E&J brandy at the liquor store to pre-game, a move commonly deployed by party pros. During the 25-mile drive to the rave in Hinton Township, they managed to kill half the bottle of booze and pound a few beers, Hulin says.

“I was already turnt up before we got there,” he says. “I knew I was gonna show these niggas what’s up.”

The event was in full swing when he arrived, and Hulin says he spent the next few hours doing what he does best: tossin’ back drinks, doling out shots and making fast friends as he deftly sized up the scene. Thousands pulsed to the electronic beats as the party grew into the debauched frenzy captured so well on Instagram. There were go-go dancers on rooftops and a fire eater running amok among the throngs. Inside the party’s “VIP room,” there were strippers grinding on poles. Naturally, that’s where Hulin spent most of the evening, he says.

Fire throwers, strippers and go-go dancers were among the entertainers at the epic rave in western Michigan Saturday night.

At some point in the evening, Hulin says his swagger briefly got the best of him, and he passed out next to a parked car. When he came to, he had lost both his cellphones and couldn’t find his friends. He was informed that Todd and Sam had split. “I said, ‘Man, shut the fuck up,'” Hulin says. “But sure enough, they fuckin’ left me there.”

Hulin says he then did what any seasoned reveler in his situation would have done—he continued drinking. “I kept turnin’ it up,” he says. “Everybody was just showing me mad love.” But while he rallied, the party spiraled out of control. A 19-year-old girl claims she was sexually assaulted, and at least six people were treated at hospitals for possible drug overdoses, including heroin, according to reports.

More than 2,000 people showed up at James Taylor's home near Hinton Township. While things quickly spiraled out of control, the sheer number of revelers kept the cops at bay all night.

Hulin shakes his head. “Who does heroin at a fuckin’ rave?” he says. “You don’t want to do downers like that. It’s gonna fuck up your whole night. If you’re at a party like that, you want to be trippin’ on ‘shrooms, acid or molly.”

Having restricted himself to booze, he was still going strong when the sun came up, and only a handful of people remained wandering through the rave’s aftermath. That’s when he and another Sunday morning straggler found a half bottle of Captain Morgan on the ground.

Fast-forward a few hours and Hulin awoke to find a journalist taking his picture, a situation that immediately put the party animal on the attack. “I said, ‘Bitch, I’m a PartieBoi. I got a bottle of Captain Morgan in my hand. Does it look like I’m passed out?'” he says. “But I wasn’t stressin’ it. The sun was beatin’ down out of the trees. It was pretty nice.”

Hulin was caught dozing off outside shortly after finding a bottle of Captain Morgan rum on the ground.

With no phone and no ride back to Greenville, Hulin says he had no option but to spend the rest of the day finishing off the bottle of rum he had found. At some point, he moved indoors and away from the sun. By about 6 p.m., Hulin says all the partying finally caught up with him.  “I was so fucked up, so moving was not an option,” he says. “I passed out on the floor.”

It was late Sunday evening when Hulin finally decided that he should probably start walking back to Greenville. Still buzzed, he spent the first few hours walking in the wrong direction. But at some point in the middle of the night, he finally caught a ride and was able to make it to his first day of work on time. For the record, that was more dumb luck than responsibility, and should in no way influence the bigger picture.

“If you think you partied harder than I did, bro, you better ask somebody,” says the 27-year-old without the slightest trace of irony. “I’m a party fucking animal.”