Shacked Up in Iran? You Risk Jail
By Eric Eyges

Shacked Up in Iran? You Risk Jail 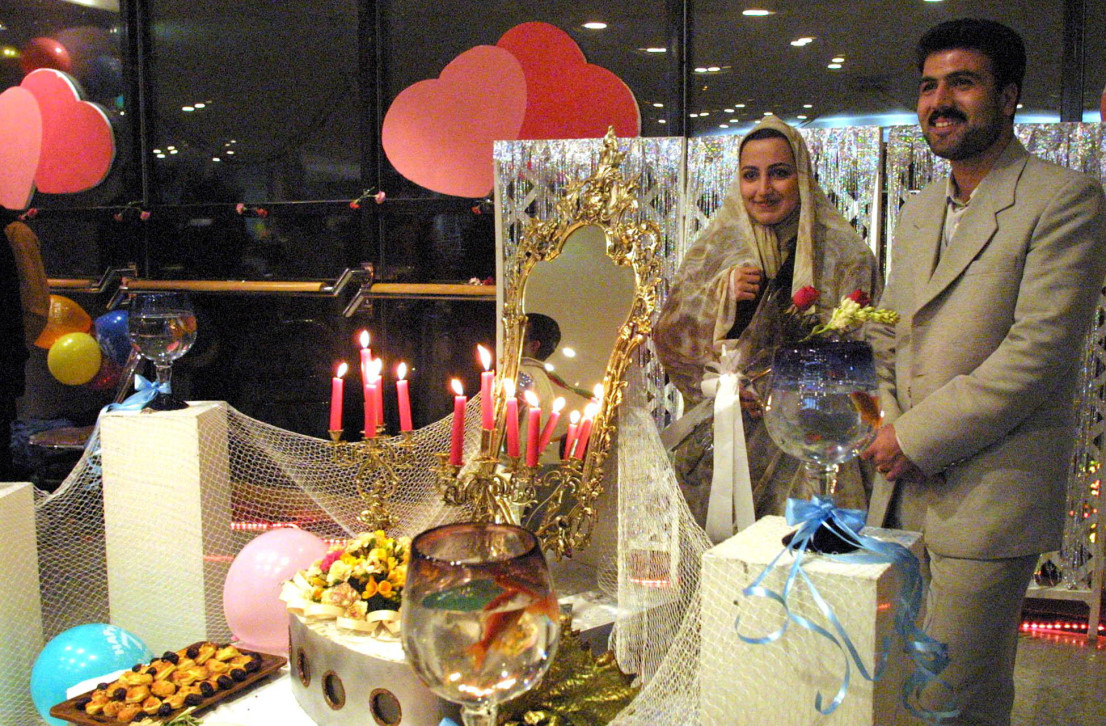 Ali and Maryam have been together for a year and a half. Ali has never had a wife, but Maryam had a short-lived marriage and divorced when she was 21. Late last year they decided to move in together. That makes them criminals because where they live, unmarried cohabitation is punishable by imprisonment. Welcome to Tehran.

An Iranian couple walks to their wedding party in Moghan Plain, Iran. The bride's face is covered by a traditional shawl named Yayliq.
(Roshan Norouzi/ZumaPress.com)

The northern suburbs of Iran’s capital, where the couple live, are markedly more liberal and affluent than the rest of the city. Here, there are few clerics and headscarves hang loosely off the back of women’s heads, exposing heavily made-up faces. Still, even in this bastion of liberalism, Ali and Maryam, whose real names have been changed to protect their identity, take care to hide their true status: “We act as a married couple and introduce ourselves as a married couple.” That’s because if they get caught, the punishment is stiff. “For an Iranian woman, having sex outside of marriage is forbidden, and the punishment can be jail or even torture,” says Ali. “The Basij [a pro-regime paramilitary force] are always looking to arrest young couples.”

The Basij are a volunteer, paramilitary force formed by the late Ayatollah Khomeini following the Islamic Revolution of 1979. They enforce Islamic moral codes and the broader domestic agenda of the conservative Islamic government.

Beyond the threat of imprisonment and bodily harm, would-be conjoints face myriad other legal and cultural obstacles that favor traditional marriage. Indeed, most couples find it impossible to find a place to live. According to Maryam, “Landlords won’t sell or rent a house to unmarried couples because it’s illegal. If the government finds out, the property owner will be in trouble.” Luckily, she adds, “Ali has his own house, so we didn’t have to rent or buy one.” Were the couple to present themselves to landlords as an unmarried couple, the odds are good that they’d be refused a lease.

From a cultural standpoint, the idea of living together outside of marriage is completely aberrant, there’s no precedent for it in Iran. “Even during the time of the Shah, living together unmarried was unacceptable,” the couple says. “It would be much more acceptable if we were just boyfriend and girlfriend, or even traveled together, that’s more common in Iran than living together unmarried.” The powerful social stigma surrounding their relationship makes it hard to win support from even their closest relatives. Maryam’s parents, British-educated lawyers, hesitated to give the couple their blessing, fearing the reaction of more conservative members of the family. Ali’s parents simply don’t know.

The original idea for this story came through Arabic and Farsi social media and press searches. Vocativ managed to secure an interview with the couple interviewed for this article working through a friend of the author who is an Iranian expatriate studying in the United States.

Nevertheless, both Ali and Maryam take comfort in the knowledge that they are not alone. Multiple reports indicate that unmarried cohabitation is on the rise, particularly among college students in the country’s larger cities where they can blend in easily among the hustle and bustle. “One of my friends has been living with her boyfriend for almost two years,” says Maryam. And in some areas, the phenomenon has been growing fast enough to attract the attention of the local authorities. Morteza Talaee, chairman of the sociocultural commission of the Tehran City Council, recently expressed concern over the rising number of cohabitants, linking it to an increase in the incidence of divorce.

Yet for all the obstacles they face, Ali and Maryam remain committed, both to their living situation and each other. They made the decision to move in together after an eight-year-long friendship and a year of exclusive dating. After six months under the same roof, they’re happy as ever: “We dated for a year and realized we had a lot in common…because of my experience and Ali’s not wanting to get married right now, we decided to move in together,” says Maryam.

Ali, for his part, has never been married, but “has had a lot of girlfriends” and appears to be in no rush. Looking directly into the webcam (we chatted via Skype), they confidently embrace their decision: “We are happy with the way things are. We don’t regret anything or care about or status in Iranian society.”

Disclaimer: The names of the two persons interviewed for this article have been changed to protect both their privacy and their safety.