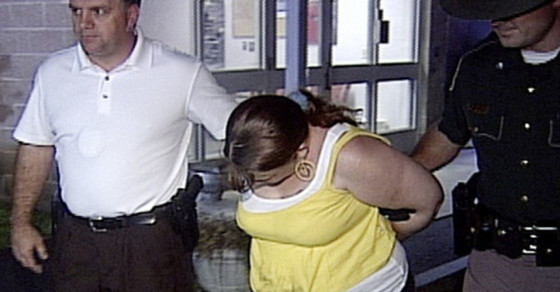 What Really Drove This “Womb Raider” to Kill a Pregnant Mother for Her Baby?
By Elizabeth Kulze

What Really Drove This “Womb Raider” to Kill a Pregnant Mother for Her Baby? 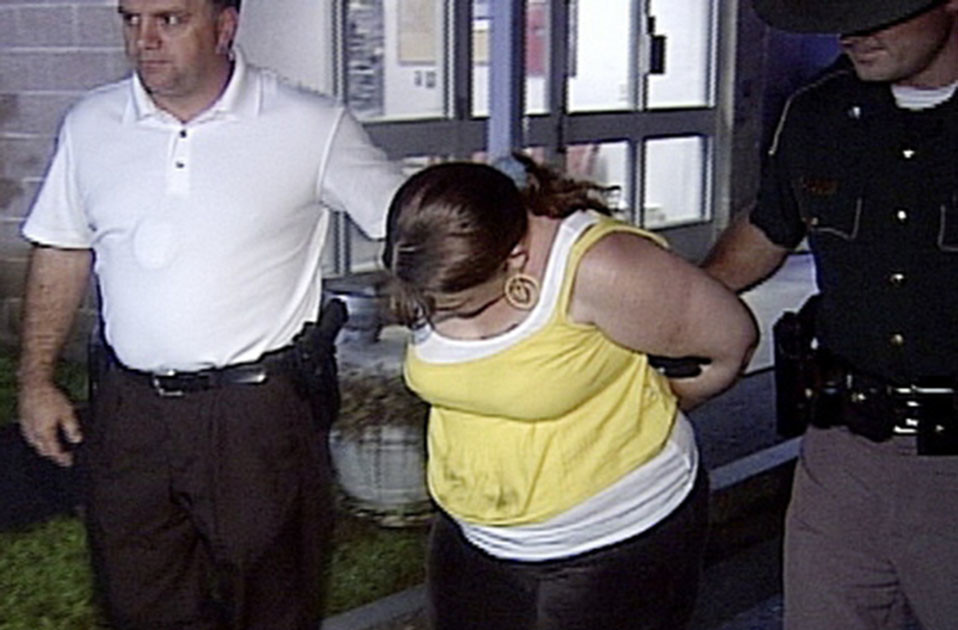 On a muggy desert day in July of 1987, police found the body of 23-year-old Cindy Ray beneath a Juniper tree in the mountains of Albuquerque, New Mexico. A crude incision had been made across her heavily pregnant belly, and the child she had borne for eight months was nowhere to be found. She had died just hours before, after bleeding out on the forest floor.

Earlier that day, Darci Pierce had kidnapped Ray from the parking lot of a health clinic under the guise of offering her a ride. The 19-year-old was so desperate for a child that she had resolved to take Ray’s for her own. She drove into the woods, where she strangled Ray unconscious before slashing her abdomen with an ignition key. Afterward, she drove to a pay phone to tell a friend that she had just had a child in her car. In order to obtain a birth certificate, Pierce headed to a local hospital, where the on-call physician medically examined her and the baby. It wasn’t long before he noticed something was wrong: Pierce’s body did not bear any signs of childbirth. She was placed in police custody, and later confessed to Ray’s murder under the pressure of an interrogation. She was sentenced to 30 years in a New Mexico prison.

The country was shaken. At the time, it was a crime considered so bizarre and uniquely horrific that it would have been crazy to think that it could happen again. But it has—14 times and counting.

Julie Corey is led by police after her arrest in New Hampshire.
(WMUR)

On Tuesday, Julie Corey was sentenced to life in prison for the 2009 murder of 23-year-old Darleen Haynes and the kidnapping of her 8-month-old fetus. Corey had faked her own pregnancy for nine months prior to the murder and managed to pass the child off as her own for nearly a week before getting caught. Corey and her boyfriend even showed off the baby at a family gathering two days before Haynes body was discovered—in a closet in Corey’s apartment—beaten and strangled, a gash cut clean across her stomach.

This monstrous, involuntary cesarean is the hallmark of a peculiarly American brand of predators known as “womb raiders,” women who murder expectant mothers in an effort to kidnap their fetuses. The two-step crime is a chilling form of premeditated infant abduction, which differs from more common postpartum kidnappings. In those cases, abducted newborns are typically swiped from hospital nurseries, but safeguards have made this increasingly difficult in recent years.

“Increased security and well-trained healthcare workers have hardened the target,” says John Rabun, the director of Infant Abduction Response at the National Center for Missing and Exploited Children (NCMEC). “So now we’ve merely pushed the crime outside of the hospital walls. These women will do anything to get a baby.”

Fortunately, only a small percentage of the nearly 300 infant abductions in the past 30 years have involved forced delivery, but these crimes have occurred frequently enough to warrant concern from social workers and forensic specialists like Rabun. In the last decade, the number of womb raider cases has actually doubled, from five reported incidents between 1987 and 1999 to 10 between 2000 and 2012. Upon close examination, all 15 cases have followed strikingly similar patterns, with perpetrators who share strangely distinctive characteristics.

The attacker is always a woman, and is typically between the ages of 19 and 40. Oftentimes, she already has children of her own from previous relationship, but is no longer capable. She doesn’t have a violent background, though several offenders have had criminal records involving deception and theft. And a 38-special snub nose, a petite handgun that can be conveniently stashed in a pocket or purse, is the most commonly used weapon.

“She is very predictable,” Rabun says of this particular type of baby snatcher. “It doesn’t help us much before the fact, but it’s very useful when investigating. It’s almost like you could write the script ahead of time.”

As savage as such cases may seem, from a forensic standpoint, the murder of the mother is never the central aim, but is instead a side effect of a larger scheme—the perpetrator’s attempt to falsify her own pregnancy. “This woman is a con artist, a manipulator and a liar. And she’s been like that her whole life,” says Rabun. “These are crimes of ruse.”

Nearly all of the cases begin with the same lie. The offender tells her partner that she is pregnant with his child and proceeds to fake a growing bump all the way through the third trimester. In order to bolster her ploy, the woman gains weight, begins wearing maternity clothes, and to all those around her, appears to be expecting. Kathy Coy, a 34-year-old Kentucky woman who murdered 21-year-old Jamie Stice for her unborn son in 2011, even stole a sonogram to prove to friends and family that her pregnancy was real. Womb raiders will also go as far as to prepare for the arrival of the child, outfitting a nursery in pastels and mobiles, and buying various baby items such as strollers and formula.

“Many of these women can’t have a child, but they need a baby either for their own narcissistic needs or to cement their relationship,” says Ann Burgess, a professor of Psychiatric Nursing and Forensics at Boston College, who sites infertility as a defining cause.

A large number of offenders were found to have had hysterectomies or tubal ligations prior to the murders. Burgess began studying abductions by cesarean section in 2002, when only six such crimes had ever been recorded. She describes the women as having dual motives, with the primary intent being to control their partners, followed second by a child-bearing fantasy. According to Burgess, this hinges not just on getting the baby, but on “becoming a mother by proxy.” They want to bond with the infant during its first moments, so they feel compelled to perform the actual delivery.

Surprisingly, almost all of the women are proven sane, which is not to say that they aren’t dysfunctional. Most are eventually diagnosed with multiple personality disorders, but they are still found rational enough to have planned and carried out such an involved and premeditated crime. Prior to the abduction, the women often research how to perform a DIY cesarean section and even obtain surgical tools. Their victims are also carefully chosen and groomed.

“It’s similar to the relationship a child molester forms with a young kid,” says Rabun. “They say the right kinds of things. They don’t have fangs and aren’t salivating at the mouth. They appear to be nice, decent people.”

Some of the women have been distant relatives of their victims, but the vast majority of targets are casual acquaintances whom they met not long before the crime. Michelle Bica, a 39-year-old Ohio woman, first encountered Theresa Andrews while she and her husband were out shopping. Afterward, Bica stalked the 8-month pregnant Andrews before arranging a meeting to look at a car the young mother was selling. Bica then conned Andrews into accompanying her home, where Andrews was shot and disemboweled.

In another case, Lisa Montgomery befriended Bobbie Jo Stinnett by arranging to buy a puppy from Stinnett and her husband’s breeding business. She requested Stinnett’s address under the pretense that she was coming to retrieve the dog. Hours later, the 23-year-old’s mother found her daughter lying in a pool of blood with her fetus removed.

In these cases, the murder itself is what Burgess calls “the crisis point” in the offender’s ruse. She has reached her faux full-term and is suddenly confronted with the fact that she has to produce a child. This final act is thought to be one of desperation, a last attempt to turn the ongoing delusion into reality.

“This is a very goal-driven crime,” says Rabun. “It’s a very narrow, obsessive focus. Her goal is to get a baby, and she has committed to using whatever means it takes.”

Yet these prenatal predators never seem to think the whole plan through. In every case, the masquerade crumbles within hours of the mother’s murder. “All of the sudden they have this dead woman and this brand new infant, and they don’t know what to do,” says Burgess. Like Darci Pierce, some of the women were discovered during physical exams at hospitals, while others were confronted at their homes after leaving a rather obvious trail (emails, phone calls, even a knife at the scene). In five of the cases, the baby also died.

Because these instances are so extraordinary, Rabun believes that taking over-precautionary measures is probably a futile exercise that’s not worth the stress for expectant mothers. “We socialize birthing as a joyful, affirmative experience, and we don’t want to taint that with scare tactics,” he says. But there is one obvious tip: Be skeptical of any woman who suddenly wants to befriend you toward the end of your pregnancy.

“These are horrible cases when they occur,” says Rabun. “But thank God that they are very infrequent.”