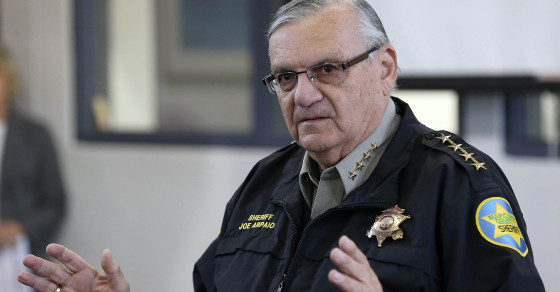 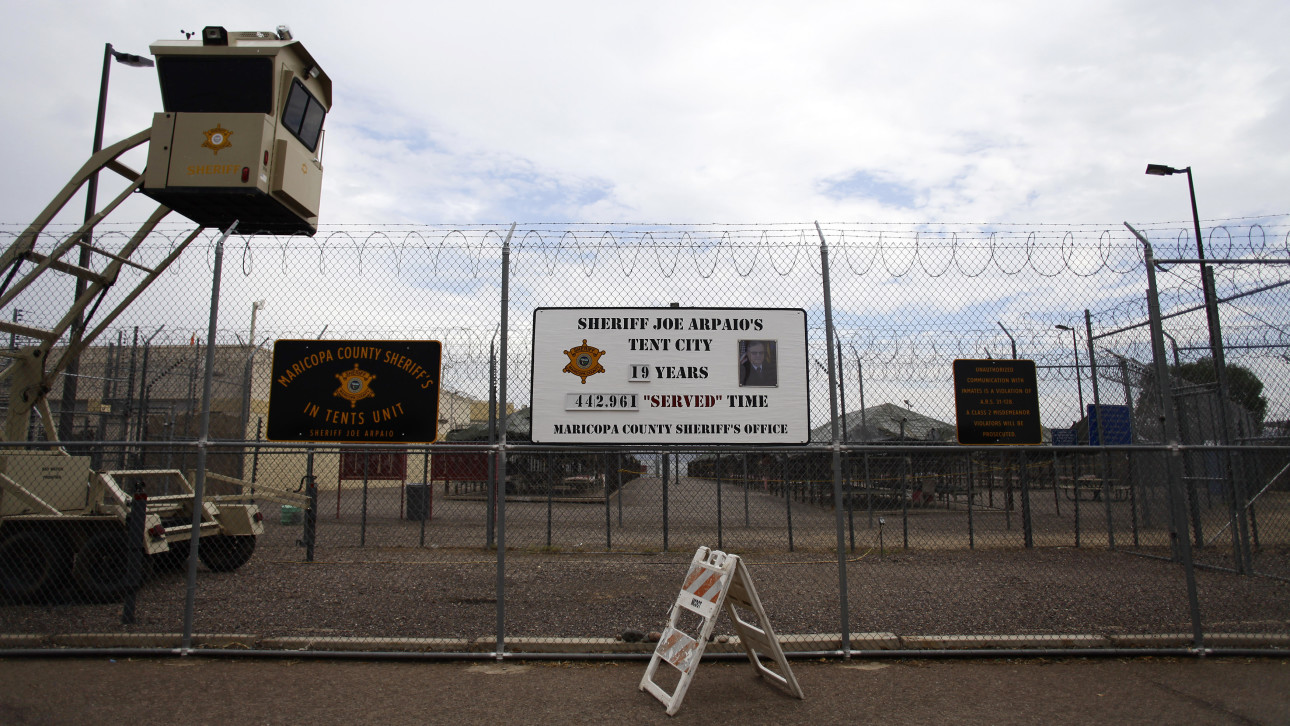 Joe Arpaio has become one of America’s most well-known sheriffs, thanks in part to unorthodox programs like his Tent City detention facility. In an effort to tackle jail overcrowding, Arpaio came up with the novel idea to house some of his inmates in sprawling outdoor facilities. This week, he hit a new milestone: half-a-million inmates have now passed through Tent City, on the west side of Phoenix. To commemorate that fact, he put up a new McDonald’s-esque sign boasting “500,000 Served.”

When a local TV reporter recently asked Arpaio if he planned to keep Tent City open to “serve” another 500,000 inmates, the sheriff answered: “We’re gonna keep going – it saves millions of dollars.” Indeed, over the course of his six terms in office, Arpaio has cultivated the image of a guy who’s not only tough on crime but also creative when it comes to cutting expenses.

But what Arpaio doesn’t note in his stream of press releases about Tent City is that inmate abuses and misuse of funds in the jail system he oversees have cost the county nearly $200 million over the last 15 years.

Maricopa County is the fourth-largest county in America, and its jail population is equally vast. Tent City is just one of eight jails that fall under Arpaio’s control. It consists of dozens of Korean War-era tents surrounded by fences with guards in watchtowers looking down on the communal living areas. Its roughly 2,000 prisoners generally are low-level criminals, many of them serving sentences for crimes like DWI and selling small amounts of drugs. They have to wear pink underwear and pink socks, and get two vegetarian meals a day.

It’s unclear exactly how much Tent City cost when it was built back in 1993, and the Maricopa County Sheriff’s Office didn’t immediately provide us with a figure. But in the press release celebrating the 500,000 milestone, Arpaio points out that a “hard facility” costs between $41 million and $50 million, and that Tent City cost “millions less.”

That number, however, is dwarfed by the legal payouts over the failings of the county’s jail system. In a five-year period between 2003 and 2007, Maricopa County taxpayers had to shell out $30 million in liability claims for mistreatment in Arpaio’s jails, according to a report from the conservative think-tank Goldwater Institute.

The $30 million doesn’t even include a likely payout for the 2011 beating/electrocution death of 44-year-old Army veteran Ernest “Marty” Atencio, a case that is still wending its way through the court system. Atencio was arrested on an assault charge and brought to one of Arpaio’s jails, where a gang of roughly 10 detention officers beat him up and used Tasers on him in what his attorney, Michael Manning, calls a “jailer’s riot.”

Following Atencio’s death, his family filed a claim against the county and Arpaio for $20 million. The Maricopa County Board of Supervisors voted to offer the Atencio family $550,000 to settle the case. Manning tells Vocativ that the settlement offer was rejected and the case likely will head to trial, where evidence – including video of the vicious attack – will likely show Atencio was not the aggressor.

One of the more egregious inmate deaths was the 2003 beating death of Brian Crenshaw by Arpaio’s detention officers. Crenshaw, who was legally blind and mentally disabled, was serving a short sentence at Tent City for shoplifting. A few days into his sentence, detention officers began denying him his anti-depressant medication. After doing so, an officer approached Crenshaw and asked to see his inmate ID card, but he refused. The officer then handcuffed the blind man and brought him to a holding cell, where he and two other officers began beating him.

Crenshaw suffered a broken neck and other injuries, and ultimately slipped into a coma while placed in segregated housing. He ultimately died. At the time, Arpaio claimed that Crenshaw sustained his injuries by falling out of his bunk — a claim that was quickly debunked by medical experts. Crenshaw’s family sued the sheriff’s office and was awarded $2 million.

Manning has represented the families of six people who were killed in Arpaio’s jails, as well as other abuse and civil rights cases against Arpaio and the county. He’s won 12 of those 13 cases, he says. “[Tent City] is nothing more than a penal publicity stunt,” Manning says. “And it ends up costing the taxpayers millions of dollars.”

A Goldwater Institute report cites a Phoenix New Times article that compares the number of lawsuits against Arpaio’s Maricopa County Sheriff’s Office to those facing other large county law-enforcement agencies. Between 2004 and 2007, there were 2,150 federal lawsuits filed against the MCSO over the conditions of the jails, which at the time housed an average of 9,200 inmates a day. During that same period, the sheriff’s offices in New York City, Los Angeles, Chicago and Houston were the targets of just 43 federal lawsuits – combined. At the time, those counties housed a combined average of roughly 61,000 inmates a day. Arpaio has been sued more than any other big-city sheriff in America for lapses at his facilities, according to Goldwater.

It’s not just the lawsuits over the jail conditions that have cost Maricopa County money. A large chunk of the nearly $200 million Arpaio has effectively drained from the county’s coffers comes from $99.5 million that the county allocated for improving jail facilities and that Arpaio diverted to other pet projects. Those projects included illegally investigating his political rivals (which led to an additional $17 million in legal settlements paid for by the county) and funding his “human smuggling unit,” a group of hand-picked officers who roamed the desert in search of illegal immigrants. Some of the money also was used to send deputies on Alaskan fishing trips and to Disneyland.

We reached out to Arpaio’s office to get their comments on his economic track record, but haven’t heard back. We’ll update the story if we do.

Despite all this, Sheriff Joe is enormously popular locally, and even some Republican presidential candidates — like Michele Bachmann, Herman Cain and Rick Perry — have made the pilgrimage to Phoenix to kiss the proverbial ring. What fuels his celebrity more than anything else are his hardline views on illegal immigration. For several years, he conducted what he called “immigration sweeps,” which involved going into Phoenix-area neighborhoods and detaining people who were in the country illegally. A federal court later found that Arpaio’s deputies were often racially profiling people during the sweeps, and ruled them unconstitutional.

As a reporter in Phoenix, I covered Arpaio for nearly five years and have spent a considerable amount of time in the tents. One thing that strikes you immediately is the oppressive heat. Arpaio, who is 83, jokes annually about the brutal conditions by holding press conferences, during which he stands in one of the tents in the middle of a Phoenix summer and holds a thermometer to show the media how hot it is. On a typical summer day, temperatures under the tents often reach 135 degrees because the heat radiating off the gravel-covered ground gets trapped under the canopies. To combat the heat, Arpaio gives inmates pink paper hand-fans with a picture of his face on them. Above his image are the words “Sheriff Joe Fan.”

Arpaio forces inmates in his jails to wear pink socks and underwear.

Arpaio is currently fighting a contempt of court charge for allegedly defying a judge’s orders to stop enforcing federal immigration laws. Critics say that his media event celebrating the 500,000th Tent City inmate is just the sheriff’s way of deflecting attention from his alleged misdeeds, something he has done before, when he finds himself in political trouble. In 2011, when the sheriff’s popularity took a hit because of a collection of investigations into the missing jail funds, Arpaio held a media event at Tent City to celebrate its 18th birthday.

It included an Elvis impersonator and dozens of female inmates throwing pink panties at the sheriff and the faux-Elvis as the two sang a duet of Frank Sinatra’s “My Way.”