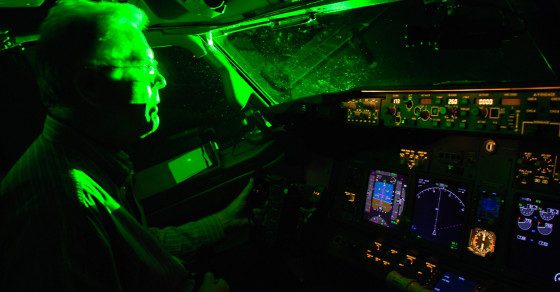 The FBI is Coming For Your Laser Pointers 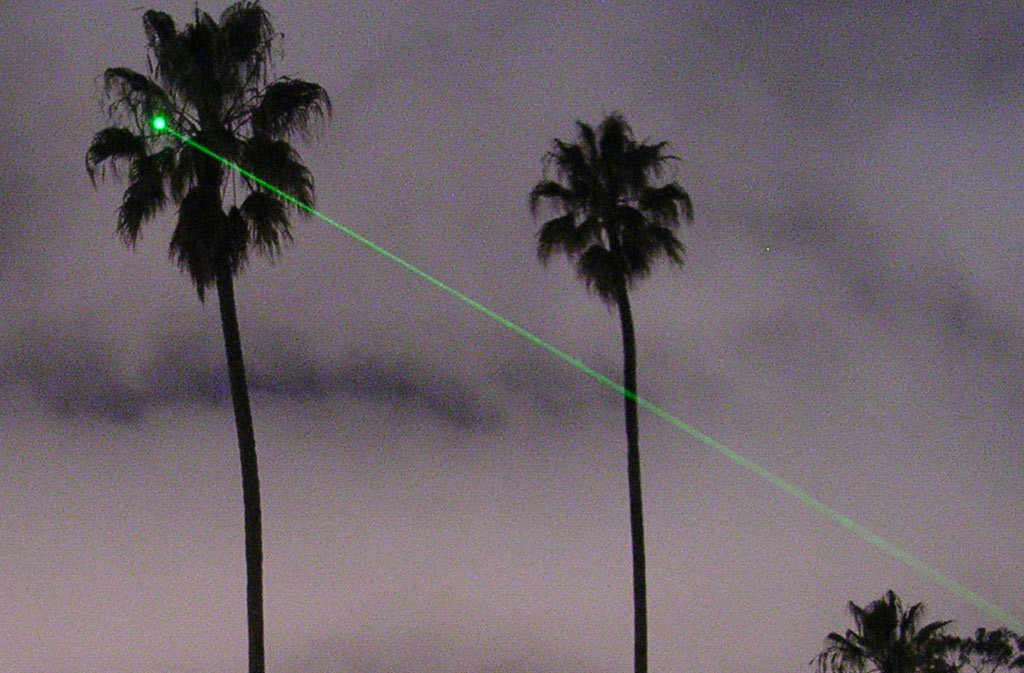 Patrick Murphy has some choice words for fellow laser-lovers tempted to train their beams at aircraft in the sky.

“Don’t screw it up for the rest of us,” says the 58-year-old beacon buff and head of the International Laser Display Association, a trade group for the laser show industry. Bitten by the light bug three decades ago, Murphy has emerged as a leading proponent for safe and responsible laser use in the last few years, which is around the time when the FAA and FBI began taking notice of people aiming high-powered pointers at airplanes and helicopters. He’s published white papers on lasers and aviation safety and runs the website LaserPointerSafety.com, an exhaustive catalogue on the topic.

DON'T LASE ME, BRO: The number aircraft tagged by people with laser pointers has risen dramatically since the FAA and FBI started tracking them in 2005.

As silly as all this may sound, federal officials remain fearful that a stray beam from a laser pointer could take down a helicopter or airplane. The FBI has spent the last two years hunting and locking up culprits who aim pointers at aircraft and they’re about to double-down on their efforts. Last week, the Bureau announced that it will expand a program that offers $10,000 to people who help nab those who shine lasers at aircraft. These days, laser tagging can get you up to five years in jail and a $250,000 fine.

Given the expanded crackdown, we thought it was a good time to chat with Murphy.

You’ve been messing around with lasers for more than 30 years. What’s changed?

When I was in college in 1980 I built a laser pointer. It was a tube about 18 inches long, which required three 6-volt lantern batteries in a belt pack. The cost was about $400, or about $1,150 today. The output was about 1 milliwatt. Today, you can get the exact same thing for less than $5, in a pocket-sized, button-battery powered pointer. If you want to spend $700, you can get the brightest possible handheld laser: 500 milliwatts of green light, which would be 10,000 times brighter than my 1980 belt-pack laser pointer, at only 60 percent of the cost.

Patrick Murphy strikes a pose with his belt-pack laser pointer in 1980. Today's pointers are the size of pens and 10,000 times more powerful.

The triumvirate of lower prices, higher powers, and brighter-appearing colors like green made laser pointers an impulse purchase. Unfortunately, no one thought to warn buyers that they should not point them at aircraft, so naturally people tried out their new gadgets to see if the beam could hit one.

Who shines a frickin’ high-powered laser at an airplane?

Half the people don’t know any better and don’t mean anything by aiming a laser into the air. It looks really cool. It’s like a big light saber. They have no idea their beam is going inside a plane and forming this large ball of light in the cockpit. The other half are anti-social people. They couldn’t care less what happens. They don’t like the sound of helicopters or the sound of planes taking off overhead. They don’t really care about the danger because they’re a bunch of stupid criminals.

What’s the worst accident that’s been caused by one of these?

We’ve had 17,000 reports of laser incidents and there have been no accidents yet. More children have been injured by bounce houses. But I don’t want to denigrate the situation. I think the FAA has a responsibility to require proper training, maybe even simulated lasers so they can get an idea how to react and recover from them.

Know of anyone with a green laser pointer like this one who likes to tag airplanes or helicopters? The FBI says it will pay you $10,000 to rat them out.

What about laser bans or restrictions?

That’s a complex subject. Bans may help. But they’ve been proven not to work. Australia banned laser pointers in 2008 and laser incidents went up 300 percent. There’s always the law of unintended consequences. Amazingly, in the U.S., there is not a regulation for warning labels on lasers. I’ve been saying for years there should be a law mandating that. If they do want to restrict lasers, my favorite idea is a tax tied to milliwatts.

How on earth does someone even get caught doing this?

If it’s an airplane, especially a commercial airplane, it’s very hard to capture someone. The pilot, you know, is trying to land a plane. It is very easy to catch somebody if you’re in a helicopter. The laser points directly down at them. They may as well  sign up for the “Just Prosecute Me” program. Still, there have only been a few hundred prosecutions out of the 17,000 reported incidents. So culprits have a relatively low chance of getting caught. But you’re still a jerk if you do it.

The narrow beam of a laser can turn into a blinding ball of light inside a cockpit. In 2013, there were 3,960 reports of laser strikes against airplanes and helicopters.

What’s the allure of a laser pointer anyway?

There’s legitimate uses for laser pointers, like identifying stars in the sky. Beyond that, there are people who just like the laser light. It’s the purest light known to man. When it sparkles, it’s very beautiful, very awesome. I think it’s a gene among some of us or something. We see beautiful lights with pure colors and we just want to do more with them. I also think it’s sort of a guy kind of thing. My laser is bigger than yours. My laser is brighter than yours.

Any parting words for folks itching to tag a plane with a laser?

My impolite message is this: don’t screw it up for the rest of us. A more polite message might be: please, never aim a laser beam at an aircraft or total stranger. Don’t annoy people. It’s not that hard.