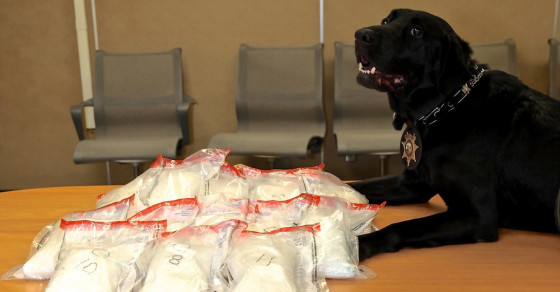 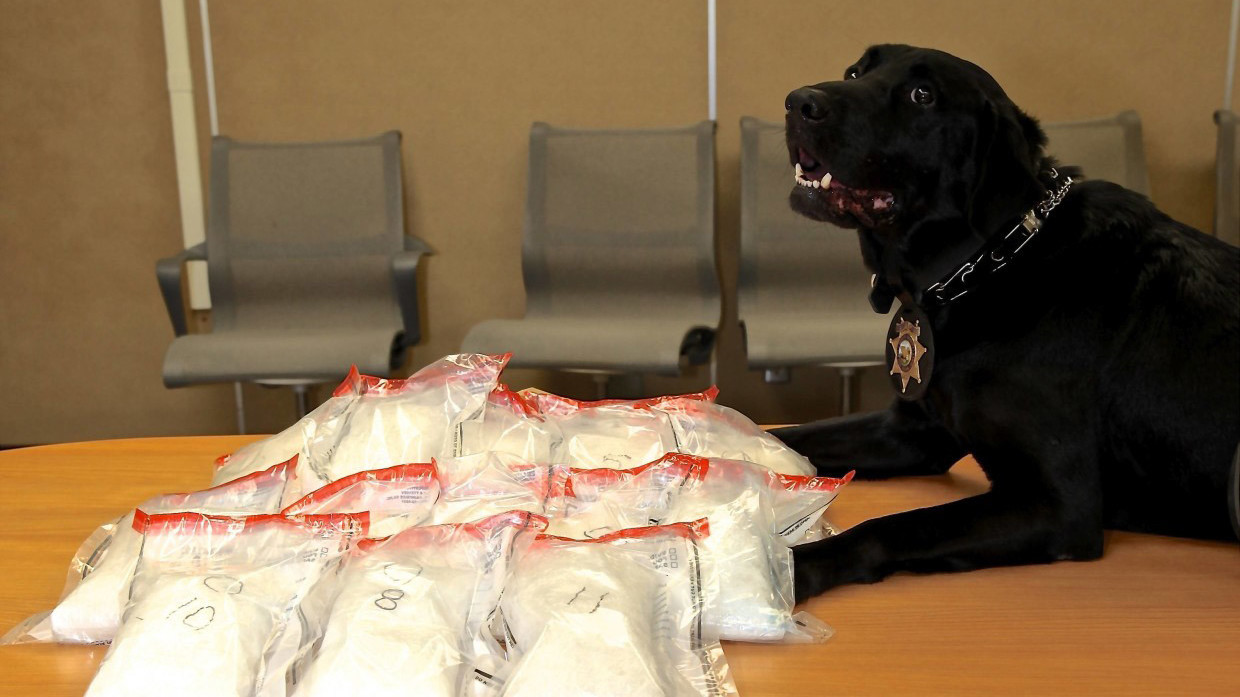 They’ve got the nose for drugs. And the mug for melting hearts. After a long day of sniffing out stashes of crack and other illicit substances, police dogs across America are sometimes urged to strike a pose next to their well-seized quarry. These cuddly canine cops almost always obey, and they’re naturals in front of the camera. The resulting snapshots speak for themselves. You have the right to remain smitten. Whoosagoodpowicedoggie?

No big deal. Nikko, a Portland, Oregon, police dog, plays it pretty cool after sniffing out 50 pounds of cocaine during a traffic stop last week.

Zeus, a member of the Santa Clara County Specialized Enforcement Team, is often the last Lab a tweaker sees before going to the big house. Here, the California canine poses with 2 pounds of crystal meth.

Dickie happily shows off the 50 pounds of pot he copped from some hapless drug mule in Sonoma, California.

Elwood City cops in Pennsylvania can thank their partner Jozek (pictured with a shit-eating grin) for this sweet haul of dank buds, shotguns and rifles.

Robin, a member of the Cattaraugus County Sheriff’s Office in New York, tallies up the fat stacks and bags of smack she golden-retrieved during a drug bust.

Ado gets a little stoic every time he ruins the day of some sad weed dealer in Hanover Township, Pennsylvania.

Marco, pictured next to 12 pounds of marijuana and 8 pounds of cocaine he muzzled up to in an SUV in St. George, Utah, has seen it all before. When you’re done playing around with that camera, he’d like to get back to work.

This handsome little crime fighter in Clinton, Connecticut, could hardly wait to get his paws on this sizable stash of weed, hash, cocaine and Oxycodone.

Solo, a member of the Carson County Sheriff’s Office in Texas, shows off the 27 pounds of hydroponic weed he took down.

This salty dog from Arizona’s Sherman County Sheriff’s Office is all business.

Spencer, of the Multnomah County Sheriff’s Office in Oregon, had a little trouble finding room to show off the 14 pounds of pot, half-pound of cocaine and $32,000 in cash he nabbed during a traffic stop.

Just when they thought he couldn’t get any more lovable, Officer Zeus of the Mountain View Police Department in California turned up 100 pounds of marijuana during a house raid.

Kuma, a cop with the Cassia County Sheriff’s Office in Idaho, licks her chops over the nearly 6 pounds of pot she seized off a Greyhound bus.

Am I ruff enough? This big badass from Lakeview K9 is all bark, unless he happens to be in the mood for bite.